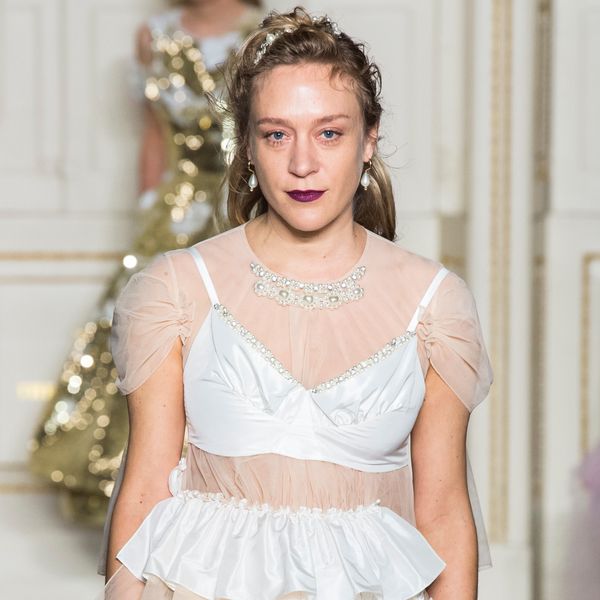 Yesterday's Simone Rocha fall 2019 show at London Fashion Week had quite the all-star cast. And there was one particular appearance that had all the fashion people freaking out: the queen herself, Chloë Sevigny, walked the runway in a dreamy, pale pink confection.

Related | An Afternoon Off With Chloë Sevigny

Sevigny has previously taken to the catwalk for friend Tara Subkoff's 2000s-era label Imitation of Christ, Dolce & Gabbana, and she famously learned how to walk for a '90s Miu Miu show alongside Kate Moss. But despite her prominence in the fashion world and status as perhaps the most stylish person alive, Sevigny doesn't really like modeling, or even going to fashion shows. "I really don't like walking in shows as a matter of fact," she told Vogue. "I don't even really like attending shows!"

But she made a special exception for Rocha, who dressed Sevigny in a look that she described as "gothic fairy princess, flower fairy."

"Simone is a friend and I'm such a fan," she said. "I've worn her to the Met Ball and to lots of other occasions and events. I like to support other women, especially in this industry, so when she asked, I said, 'Why not?' Her clothing is like nothing you really see out there. It just makes you feel otherworldly."

Sevigny was arguably the most mainstream star to take on Rocha's Louise Bourgeois-inspired collection. But the cast was full of beloved figures from the art and fashion worlds. Alongside current top models like Adut Akech, Rocha included faces from the '90s and 2000s, including Kirsten Owen, Lily Cole, Jeny Howorth, Jade Parfitt, Marie-Sophie Wilson-Carr, Iekeliene Stange, and the semi-retired Lindsey Wixson. Adwoa Aboah's younger sister Kesewa also walked, as did Edie Campbell's sister Olympia. Argentinian sculptor Conie Vallese opened the show. "Almost all of these women are are personal friends," Rocha told i-D. "Lily and Chloë are friends who are really wonderful, inspiring writers and directors in their own rights. I said 'I'm doing a collection that's all about intimacy, would you be interested?'" We're glad they were.