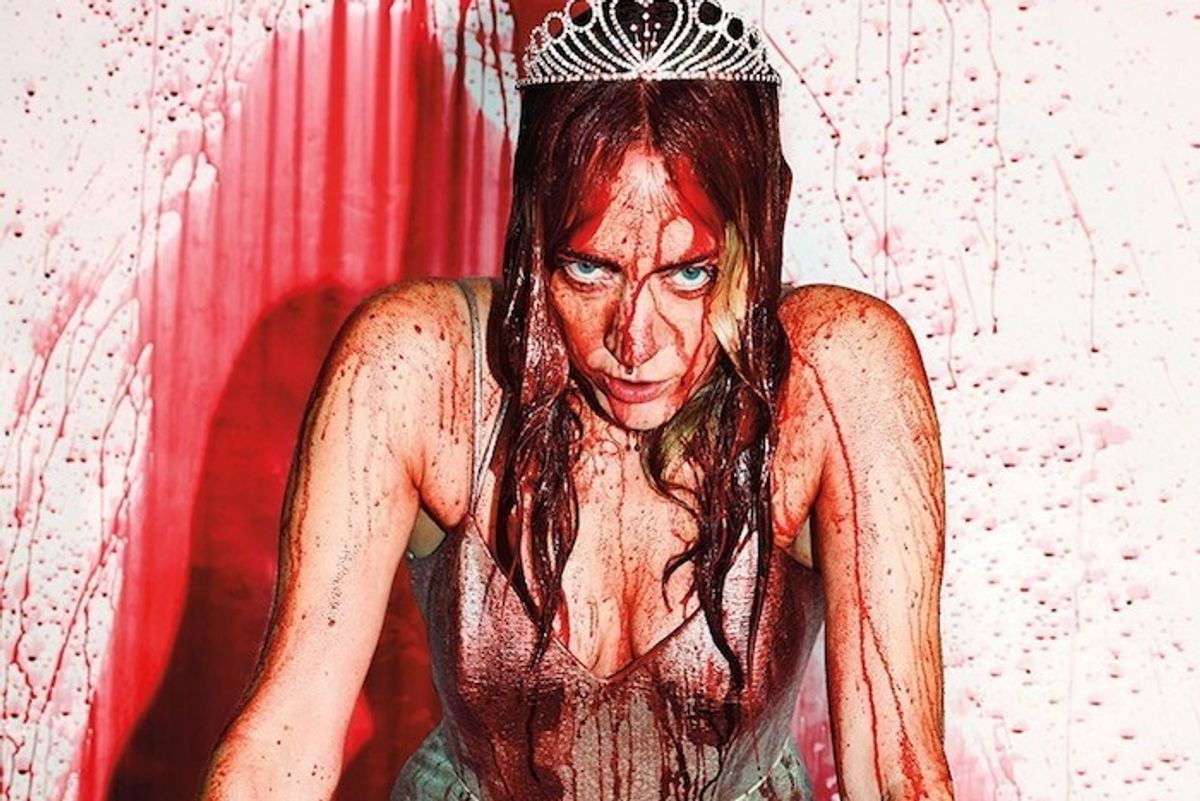 Chloë Sevigny On Horror Films, Cyberbullying And Working With Her Friend Tara Subkoff

If there's one thing that can be said about eternal downtown cool girl Chloë Sevigny, it's that she doesn't half-ass it when it comes to committing to a role. That goes for photoshoots as well. Sevigny didn't just don a prom gown and tiara for her PAPER spread promoting her starring role in the Tara Subkoff film #Horror. She invoked the very essence of the iconic Sissy Spacek character, complete with the piercing scream she let out as the corn-syrup blood substitute was dumped on her. Given her horrified shriek, you'd think she was actually doused in pig's blood.

Sevigny brings this same intensity to her role as #Horror's Alex Cox, a detached, struggling addict that's too lost in her own head to notice that the middle school slumber party in her charge is going all Lord of the Flies on each other via cyberbullying. The actress took a few minutes from getting glammed up as Carrie to discuss her #Horror role, what it's like to work with Subkoff, and how she weathers her own instances of people behaving horribly towards her on social media.

Why did you choose Carrie for your character?

I didn't choose it, they gave me an option of three. They said I could be Mia in Rosemary's, Carrie, or maybe Deneuve in Repulsion. I didn't know we were allowed to choose, but I can speak at length on Carrie and how much I love Carrie and how formative it was for me.

A few years ago I went to see Carrie; they were playing it in Los Angeles at the Hollywood Forever Cemetery, and it's always difficult to see movies outdoors. People are always drinking and talking, it's not like being in the movie theater where people are rapt and their attention is solely on the screen. I guess I didn't know the degree of the kind of camp following it has. You know, the credit sequence is that beautiful, slo-mo shot where they're in the locker room, and in the shower and they're in the towels and it's very romantic and very beautiful and then Carrie gets her period for the first time in the shower, and then the girls are throwing tampons and the crowd starts mocking and jeering and yelling at the screen in a very funny way. I got so upset, because for me that's such an emotional moment. I just feel so much for Carrie and I have such a deep love for her that I can't be around these people mocking this, the horror that was happening to this poor girl, so I got up and left.

Getting your period in public in front of a bunch of people does tap into a universal fear for girls.

Lots of girls can relate to that, she's obviously an outsider in school, she didn't know what was happening to her, her mother hadn't protected her (or gave) her any information about what was happening. It kind of relates back to my character in Tara's film, the absent mother. I think that's a character that reoccurs in horror films. Or any kind of scary story where girls find themselves with absentee parents, which made my character not so sympathetic, but she has her own faults. She's struggling with her addiction, and she's damaged in her own way, and they talk about her husband and his cheating. So I think she's more narcissistic and selfish and not as involved with her kids as she should be.

Do you ever wonder about all the ways you could have ruined your life if social media was around when you were in high school?

Hopefully not ruined my life, but I'm very happy that I grew up in a time where it wasn't there, and I wouldn't change it for the world. I don't know how I would have dealt with it as a teen, but I remember just dealing with the media in my own way when I became an actress. I made big pronouncements, like people do when they're really young, and I was like "The first time I'm in People magazine I'm gonna quit acting," so I probably would have had some kind of version of that in dealing with social media in some way. I also think the anonymity overall has changed so much, maintaining that.

Do you have to deal with cyberbullying, or people being horrible to you online?

I do, and I try to not read the comments. I started my own Instagram page so I could have my own voice out there and not someone pretending to be me. It's just such a business tool now, and for promotion you just kind of have to have it, contractually, as part of different things I've done and projects I've been involved with. Sometimes people write things that are really hurtful on that and I delete them. And I want to be as democratic as possible and just leave everything up but, it's like, "this is not appropriate." I put up this picture of Princess Diana on the anniversary of her death and people were writing the craziest, cruelest, most unkind things. And I see this with like Lena Dunham, or Tavi, and all of those young girls who are trying to keep it posi, and trying to show a different side of beauty and whatnot and it was just shocking, the comments.

They also target me as well and I see that all over. I always say that I'd rather cut off my pinky than Google myself. The unkind words and photos that come up. People just love to criticize; I guess it just makes them feel better about themselves. They have it in their minds that they don't like you for this, that, or the other reason. Certain tabloid magazines have it out for me. They continually, no matter what, make fun of me. I wore some Louis Vuitton dress and I was in "what was she thinking?" (spread) and they were saying how it was awful, and the next week they have a double-page spread all of girls wearing dresses from basically that collection. But because I was wearing (the dress) and they have it out for me, or because I don't embrace the mainstream culture as much as they'd like me to, I don't play the game the way they want me to, or that I'm unattractive... it can be very cruel and very hurtful and I do find myself crying.

I had an event the night before and I saw some comment online, and I spent the day like "I don't know if I can handle this." I wanna think that I'm punk and I'm not gonna let it bother me, and I have to show I know who I am, but you can't help but be broke down by it. Even Trent Reznor was like, you know you're my fans but, fuck you. They were so critical of his wife when he got married that he was like, if this is how you're going to treat someone that I love, I'm gonna stop performing, and he did.

In addition to Carrie, what are your other favorite horror films?

I'm a child of the '70s, so I like Exorcist, Poltergeist, any of those things I saw in my formative years that really terrified me. I do like the Freddys and the Friday the 13ths, but I'm more into the psychological ones: The Rosemary's Babies, The Shining, the classics.

What is it like working with people you've known for so long, including a close friend like Tara Subkoff?

Tara and I have been friends for almost 20 years, we've worked together as actresses. She's directed me before, in short things that she did. She's one of my closest friends. We have a rapport and a trust there. It felt very comfortable to try things that maybe I wouldn't with a director I didn't know or that I was intimidated by.

What kind of thing would you try with Tara?

Just pushing it as far a performance. In the scene where I was accusing my husband of cheating, she'd be like "Remember when this guy did this, that, and the other thing?" She'd push my buttons in that way and say "Just let him have it!" So then I would do a really big take, and then a quiet take, and then I'd do a crying take, a fuck you take. Just feeling safe enough to be playful enough and experiment and trying different things. Maybe that's more a testament to her as a director than her as a friend.