Kate Christensen first caught our attention in 1999 with her debut novel, In the Drink. The boozy, gritty book about a down-and-out ghost writer came as a much needed antidote to the fluffy, unrealistic, happily-ever-after drek about chicks finding Prince Charming. Christensen continued to deliver in her smart, saucy way, following up with Jeremy Thrane, a spoof of behind-the-scenes celeb life, about a man whose boyfriend, a closeted movie-star, keeps him in golden handcuffs until he dumps him. Then came The Epicure's Lament with the misanthropic ex-gigolo Hugo plagued by an obscure disease, for which Christensen recently co-wrote a screenplay, slated to be directed by Oscar-nominated director Juan Campanella. (Robert Downey Jr. should play the sexy, scathingly witty genius Hugo; it would be unfair if anyone else did.) What these novels share, besides staggeringly eloquent prose, astute social observations and the promise of a good story, is an offbeat, love-inducing antihero. But here, in the hilarious yet poignant The Great Man (Doubleday, $23.95), there is more than just one offbeat hero or, rather, heroine. The great man referred to in the title is already dead by page one. Instead, the novel homes in on three chicks, well, older chicks, that the famous painter Oscar Feldman, narcissist par excellence, left behind. There's Teddy, the free-spirited mistress with whom Oscar fathered two daughters; somewhat passive Abigail, the wife, who bore his autistic son; and cantankerous and pining Maxine, the gay sister, octogenarian and matriarch, a painter who never quite achieved her brother's level of success. The three collide when two wide-eyed biographers come knocking. They scramble beneath Oscar's swooping shadow as they try to uphold the myth of the manâor not. I decided to come a knocking, too, but at the door of Ms. Christensen's house in Greenpoint. Or so I thought....

Kate Christensen: Yes, this is the house where she lived when she was with Oscar.

GD: And I'm here like Henry Burke, the biographer who arrives to interview Teddy about Oscar in the first chapter. But instead of meeting a sexy septuagenarian, I'm finding a sexy young author.

GD: No, you're not! I hate that term. It's old-fashioned, and it doesn't apply to you.

KC: I hope you're hungry. I'm cooking you dinner...

KC: Teddy always cooked for Oscar as a way of seducing him, and her meals for the biographers are meant to manipulate them a little, too.

GD: Are you manipulating me?

KC: Well, I'm buttering you up a little.

GD: Food is becoming increasingly more prominent in your books.

KC: It's essential to this book. It drives what someone at Kirkus called the "flimsy plot." It gets everyone together, the women with the biographers and with one another and other various characters. There's food in every chapter. It reveals a lot about each person --

GD: Flimsy plot? I thought the plot was fine. This book is a character-driven novel, like all your novels. You're very traditional that way. I think of Thomas Mann's Confessions of Felix Krull, Confidence Man. It's not like you're writing a fucking screenplay for Hollywood. Haven't these people studied literature? I'm getting all heated up!

KC: The buttering up is working... I think they meant the secret about the painting Helena, using a secret as a device. Anyway, what interests me most, besides food, is trouble -- setting up situations in which there's tension or a power imbalance or an unresolved conflict, something to irk everyone, get under the skin and provoke a kind of energetic exchange.

GD: I devour your books because of that. You don't shy away from those uncomfortable awkward places, which creates awesome drama and, in your case, a lot of brilliant, hilarious humor.

KC: Thank you! Loki, the Norse god of mischief, is my patron saint. I find that the mercurial and mischievous nature of my personality can only be fully expressed when I create problems between characters. If I let this deep, dark side have free rein in the real world, it's disastrous. So I try to behave, but then I have all this leftover and unfulfilled badness, and I think this is the most constructive use of it. If it is interesting or funny, good, but really I'm just scratching an itch.

GD: The characters you write about tend to live on the fringe.

KC: The characters in my books are on the periphery of fame, money and/or success -- you're absolutely right. I see the characters in this novel as satellites around a sun, which is Oscar. He is the central character, though he's dead. The women have never achieved their true ambitions; they live in Oscar's shadow -- incomplete lives. Oscar's the one in this novel who does and says what he wants and isolates himself and is limited because of it.

GD: Like Claudia in In the Drink or Hugo in The Epicure's Lament?

KC: Yeah. But this time I didn't give that kind of character first-person control. Oscar didn't interest me as a narrator because he didn't suffer. He wasn't tormented, and he was successful. So I wrote about the people he affected and left behind.

GD: So this is about the havoc Oscar has wreaked through his egotism.

KC: Yes, and about the complicity of these women who in some way made themselves the caretakers of his ego, his handmaidens.

GD: Are you saying something about man/woman dynamics? These women existed through Oscar, so are they really full-fledged people?

KC: All the women gave up something. Teddy gave up being a wife. Abigail gave up being a professor. Lila wanted to be a novelist. Maxine wanted to be far more famous than she ever was. But in some way, they were all happier, more fulfilled by their unrealized lives -- they all still have a lot of yearning left, not smugness or detachment. "If you were a woman, you could never have anything," Teddy thinks. Meanwhile, Oscar did, but was he as interesting as they are? I would say, "Very much not."

GD: One thing that does become clear is that Oscar needed these women to be complete. So are they, in fact, more complete than he is?

KC: In a way, yes. They tolerated him and adored him because he provided a vicarious sense of what their own lives were missing. So everyone won, because they didn't really want to be like Oscar.

GD: Do you think things are different now? Between younger people?

KC: We live in a profoundly conservative time. The pendulum has swung backward to "family values," whatever the fuck that means, fundamentalist religions, and a tame and docile population who's being scarily and almost cartoonishly manipulated by the most criminally dastardly government this country has ever had. We dress alike, we talk alike, we are a big homogeneous bunch of domesticated cows in Pottery Barns.

GD: Wow, you talk the way you write... Every sentence perfect. Keep going...

KC: That's because I'm writing out loud, not really talking normally. In the novel, Abigail, Oscar's widow, says kids don't fight the status quo anymore, and it worries her. Not that she fought it, but she watched from the sidelines and admired the women who left their husbands and burned their bras and the kids who protested the war. I don't think we ever learn from history, actually. We're stuck living wherever our own pendulum has swung.

GD: What are your influences?

KC: I read and love everything indiscriminately. I love detective novels --there are some great series by women now that I'm addicted to -- and John Burdett's Bangkok books. Edith Wharton is an enormous influence. The House of Mirth is one of the greatest novels I've ever read, a modern tragedy, sad and brilliant. Thomas Hardy is bitterly realistic and nostalgic and romantic, all at the same time.

KC: I think the thing you're best at turns out to be the most fun. Nothing gives me more pleasure than creating a curmudgeon or a bad girl or a loser of some stripe. I think my feelings are largely subversive, but I'm apolitical in the extreme, so this is my way of protesting the way things are, with fringe characters who shoot themselves in the foot and are driven largely by spleen.

GD: Do you identify with that?

KC: I wake up every morning in a panic and get through the day by kicking myself in various ways. No matter how far away I get from who I was in my 20s, which is a tamer version of Claudia, I feel that it would take very little for me to end up there again. I am where I am by dint of luck... and a lot of hard work. I have extremely high expectations of myself, and I don't know whether I'll ever live up to them.

GD: When did you first start wanting to be a novelist?

KC: I wrote my first story when I was six and have been writing nonstop ever since. I'm bad at everything else. So much of what drove me to write when I first moved to New York was a kind of prickly, nettled, insulted pride, a determination to show all those people who humiliated me -- men who didn't love me and treated me badly, bosses who were mean and didn't see who I was or care. "I'll show them!" has sort of been my mantra.

GD: Well, I'm sure they're eating their hearts out now.

KC: I doubt it, but I can always dream. 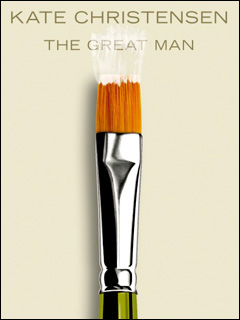 How to create your own single-purpose Tumblr