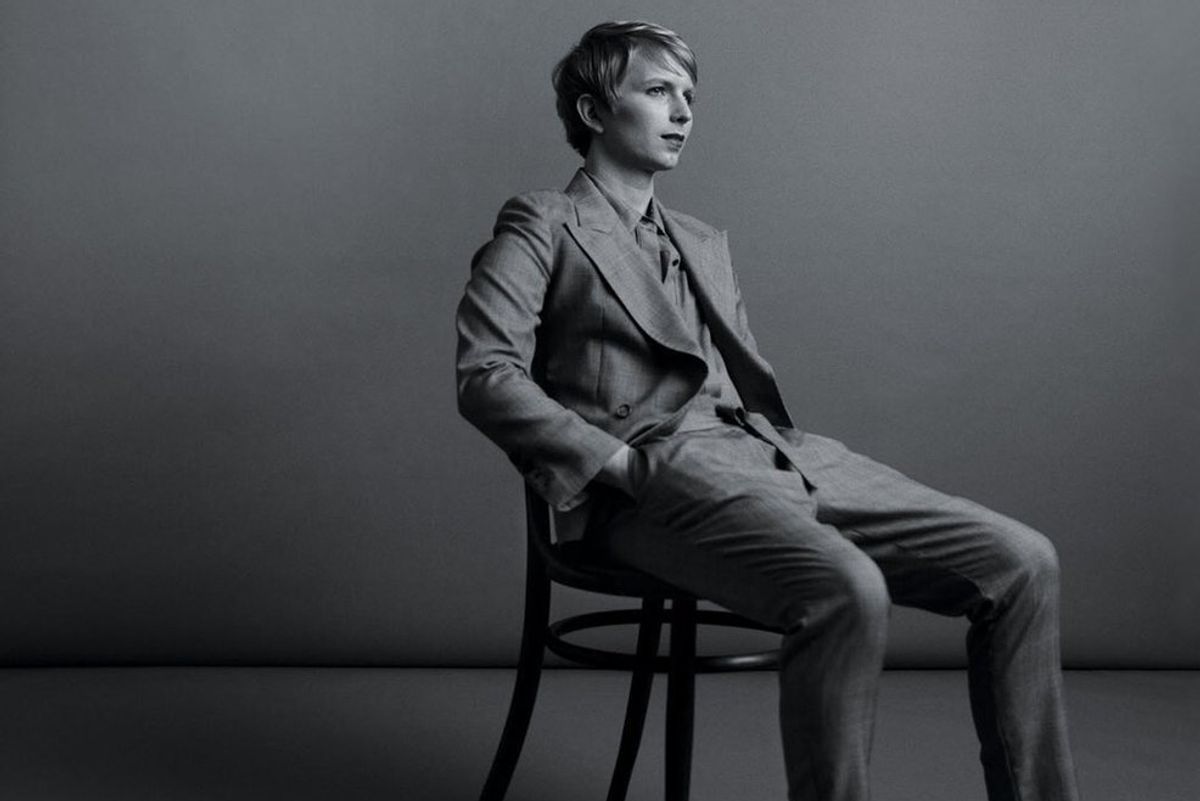 Known primarily for leaking confidential information through Julian Assange's WikiLeaks, Chelsea Manning's May 10, 2017 release from prison (after serving seven years of a 35-year sentence) has placed the so-called "whistle-blower" in the spotlight. As a media circus erupted around her re-entry into the free world, early reports seemed to suggest that Vogue would secure the first in-depth cover story on the revered legend. But this morning, that claim was proven false when The New York Times revealed their own story on her. Vanessa Friedman, the Times' chief fashion critic and director, addressed the situation in a tweet.

That rumor abt Chelsea Manning making her post-prison debut in Vogue? Actually, it's the @NYTMag, and it's a corker. https://t.co/KSAei3ZxAd
— Vanessa Friedman (@VVFriedman) June 12, 2017

Though there is much to learn about the enigmatic figure from the detailed profile, the most powerful part of the story focuses on Chelsea's transition and the long, arduous path she had towards accepting her gender identity as a trans woman. Chelsea, "a name she used as a child for her handle on the Sims video game," admitted to experiencing gender dysphoria as early as five, when she confided in her father that she wanted "to do girl things." But as information on transness was scarce at best at the time ("The closest I came to knowing anything was from the portrayal of drag-queen-style cross-dressing on sensational TV shows," she says), Manning assumed she was gay, and came out to a close friend in elementary school.

Manning agreed with the interviewer's comments about gender dysphoria being similar to a "giant, cosmic toothache," noting, "Morning, evening, breakfast, lunch, dinner, wherever you are. It's everywhere you go." She discloses that she had always experimented with girls clothing and makeup, but notes that it really picked up when she moved with her mother to Wales, where she began walking around in public wearing it — but only because she could "jam [the makeup] into a waste bin on her way home."

At 18, when she returned to the United States to live with her father and his new wife, she opted to forego gender identification at all. As she told the interviewer, "I thought, Maybe I want to just eradicate this gender thing and be gender neutral, like androgynous." Unfortunately, her stepmother did not support her decision and ostracized her — even going as far as forbidding Manning from going into the kitchen, which Manning believed resulted from her stepmother's feelings that she was "unclean."

While enlisted in the army, Manning describes experiencing homophobia, where she was constantly called a "faggot" by other soldiers. Later, despite having a boyfriend that she met on an online dating site, Manning never felt comfortable revealing or discussing her identity with anyone else — a decision that was only amplified by the implementation of the since-repealed Don't Ask, Don't Tell policy.

In 2009, after uploading the confidential files that she would later leak to the public onto her personal laptop, Chelsea Manning left her war post to return to the United States for a two-week leave. Once back stateside, she took her first big steps towards embracing her true gender identity when she went out dressed fully as a woman:

Days later, Manning put on a blond wig and ran in a low crouch from the side door of her aunt's house, out of view of the neighbors, and drove to the train station. She wore a dark coat and, under it, business-casual woman's wear she bought at a local department store; she claimed it was for her friend who needed it for a job interview. In Washington, she went to a Starbucks, ate lunch at a busy restaurant and wandered through the aisles of a bookstore; later, she climbed back on the Metro and rode it aimlessly around. She took great pleasure in being seen as she knew she was and comfort in how easily she passed — rarely did anyone give her a second glance.

As for the reason that she decided to own her trans identity at this point in particular, Manning specifically cites the things she was forced to witness while deployed in Iraq. She said she didn't have the guts at first, but, "Being exposed to so much death on a daily basis makes you grapple with your own mortality," and she wanted to live the rest of her life as her authentic self.

The final step in her affirmation came when she sent a picture of herself as a woman (at the time, using the name "Brianna") to one of her superiors in the Army. The subject was "My Problem" and the body found the former soldier openly disclosing her new gender identity as something that was "not going away." At the same time, Manning was undergoing the beginning of her court trial for accusations of treason. Though she initially thought it best to withhold any information about her gender identity, she ultimately decided to come clean and write a statement that she signed as Chelsea.

"As I transition into the next phase of my life, I want everyone to know the real me. I am Chelsea Manning. I am female."

Read the entire cover story at The New York Times.