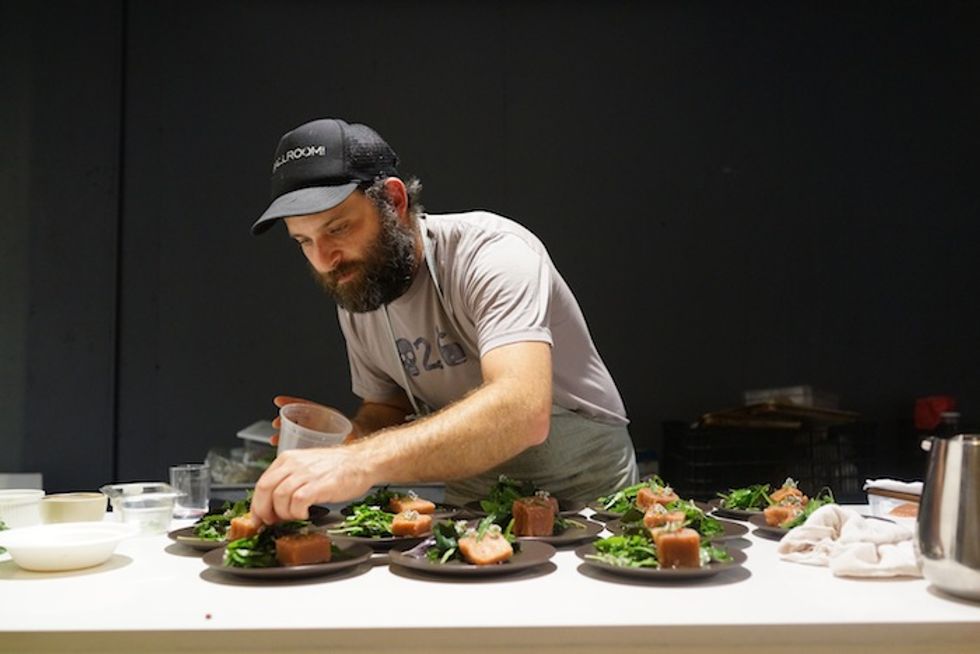 Chef Leif Hedendal
On September 6th artist Doug Aitken's nomadic happening-cum-public art project, Station to Station, starts its 22-day journey from New York to California. The train will have a changing cast of characters and site-specific stops in places like Pittsburgh, Chicago and Winslow, AZ. On board for the project are Savages, Patti Smith, Thurston Moore, Beck, Cat Power, Ed Ruscha, James Turrell, Nam June Paik, Catherine Opie and many more too numerous to mention. Food, and lots of it, will be needed to keep everybody from going off the rails. San Francisco-based chef (and one of our 2013 Beautiful People) Leif Hedendal, 35, worked with Alice Waters to curate local ingredients along the way. He talked to us by phone before taking off on the adventure.

How did you get involved in Station to Station?

Elise Van Middelem, the artistic manager, came to an event I cooked for called An Exhibition in Your Mouth, a dinner put on by Ben Kinmont in San Francisco. She said that ever since that night she had me in the back of her mind.

Can you explain An Exhibition in Your Mouth?

It was a really interesting project, a tasting menu based on artists' recipes. The only way to experience it was by eating it.

One of the dishes was based on a work by the artist Geoff Hendricks, called Clouds. I made ten different flavors of mashed potatoes on one plate, with flavors like vanilla, almond, orange, mint and bay leaf.

Do you know how many people you'll be cooking for on the train?

I have a feeling the kitchen is going to be really confining.

I can roll with the punches. I've been stuck cooking in broom closets at galleries.

What have you done to prepare?

Not only am I the train chef, I'm the food co-curator with Alice Waters. We built this yurt to bring along with us. Local, Slow Food-type producers will be vendors in each of the cities so they'll have this ready-made booth we designed. I've also been organizing with Ed Ruscha to make a cactus omelet dinner for the stops in Arizona. He has the recipe.

So you haven't been able to practice making it yet.

I'll be doing it on the fly. My goal is to serve food that's almost entirely local from the cities we're passing through, plus humanely raised meats from small producers. I'm making it difficult for myself.

Nope. I'm an independent chef and do a lot of catering and work with artists and art spaces instead of working in a restaurant.

I like to set my own hours and be more creative. I've worked in restaurants and didn't enjoy it that much. You're always doing the same thing, and the pay and schedule isn't that good. It didn't suit my personality.

What are you looking forward to most on the trip?

I'm really excited to go to some of these cities I've never been to before, especially Minneapolis -- and Santa Fe because of all the great artists there. And I'm excited to cook for Cat Power.

How much staff will you have on board?

Three people will be helping me in the kitchen. Not Alice Waters. I'll be serving lunches and dinners, not cooking 24/7.

What about passengers with dietary restrictions?

Just a few vegetarians, not too much to worry about. The Congos are Rastafarian and have an Ital diet, which means vegan and no salt. That could be a little bit of a challenge, but they're just riding the last leg from LA to Oakland.

Will the meals that you'll be cooking on the train be art in some way?

Conceptual art, in that I'm going to be sourcing in each city and serving it as we leave so we can think about what that means.