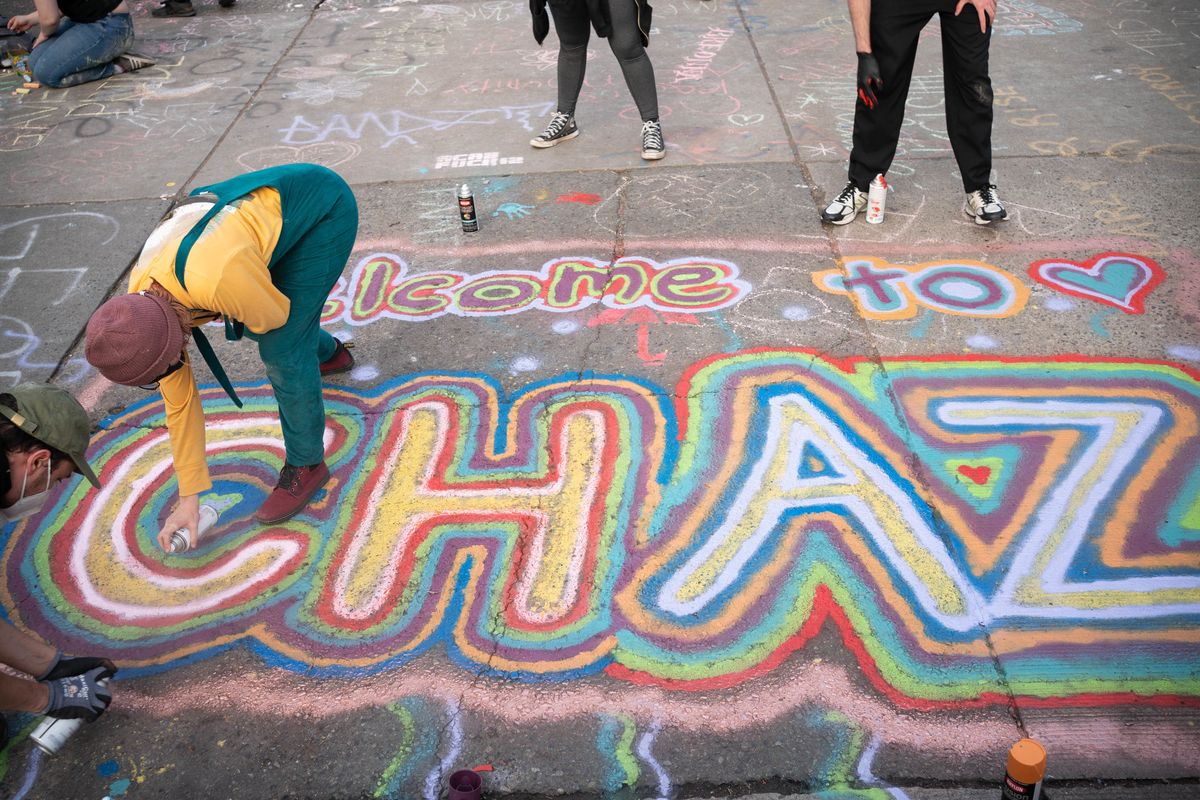 Ok, But What Is the 'Capitol Hill Autonomous Zone'?

In the wake of George Floyd's death at the hands of Officer Derek Chauvin, Black Lives Matter protestors across the US are calling for the defunding and abolition of police. But while some are still having trouble imagining what a nation without police could look like, Seattle residents have already decided to give it a go.

On Monday, June 8, Seattle police gathered their belongings, boarded up the east precinct and abandoned their post. The former precinct, which now reads "Seattle People Department," is the backdrop for the newly formed "CHAZ," or, "Capitol Hill Autonomous Zone." CHAZ, which is aptly situated in the city's Capitol Hill neighborhood, is occupied by protestors, activists and artists alike aiming to demonstrate a peaceful, police-free society.

When Police Chief Carmen Best opened up Pine Street for protesters to march through, she wasn't expecting them to stay put. Seattle residents, however, chose to set up camp across six blocks in the surrounding area, providing food and shelter for supporters looking to charge up after their respective demonstrations have ended. The Black Lives Matter chant "We ain't goin' 'til we get it" ringing true.

Pine Street has since been painted to display "Black Lives Matter" days after police tear-gassed protesters, despite declaring a 30-day ban of its usage.

Since Monday, the "police-free" zone has been bustling with activity. Late-night screenings of documentaries and films centering black experiences, like Ava DuVernay's 13th and the 1990 classic Paris Is Burning, are being projected on the streets; makeshift markets called "No Cop Co-ops" are offering free food, coffee and books; smoking and non-smoking sections are being erected.

The back alley wall of the SPD East Precinct has become an art mural. Streets, sidewalks, and boarded up windows ar… https://t.co/7MIPZcgFKI
— Casey Martin (@Casey Martin)1591852275.0

"It's nothing aggressive or violent or nothing like that," Rooks said. "We didn't come out here for any of that. All we wanted was what is equal and what is right."

Unsurprisingly, President Trump expressed his qualms with the zone in a tweet on Wednesday night, writing that "radical left" Washington Governor Jay Inslee and Jenny Durkan, mayor of Seattle, are "being taunted and played at a level that our great Country has never seen before."

"Take back your city NOW," he continued in the threatening message. "If you don't do it, I will. This is not a game. These ugly Anarchists must be stooped IMMEDIATELY. MOVE FAST!"

Gov. Inslee responded to the initial tweet, pointing out Trump's spelling error, among other things. "A man who is totally incapable of governing should stay out of Washington state's business," Inslee wrote. "'Stoop' tweeting."

Durkan responded as well, showing her support for CHAZ and turning the focus onto Trump's leadership (or lack thereof): "Make us all safe. Go back to your bunker."

After Trump spoke out on the matter, many locals are engaging in heated debates about whether police should re-enter the space or not, with some fearing crimes, like break-ins, not being monitored by police and others worrying for the safety of the peaceful protesters.

According to KOMO 4 TV, Seattle police said that they are "reaching out" to leaders of CHAZ so they can eventually "move back into the east precinct without inciting more civil unrest."