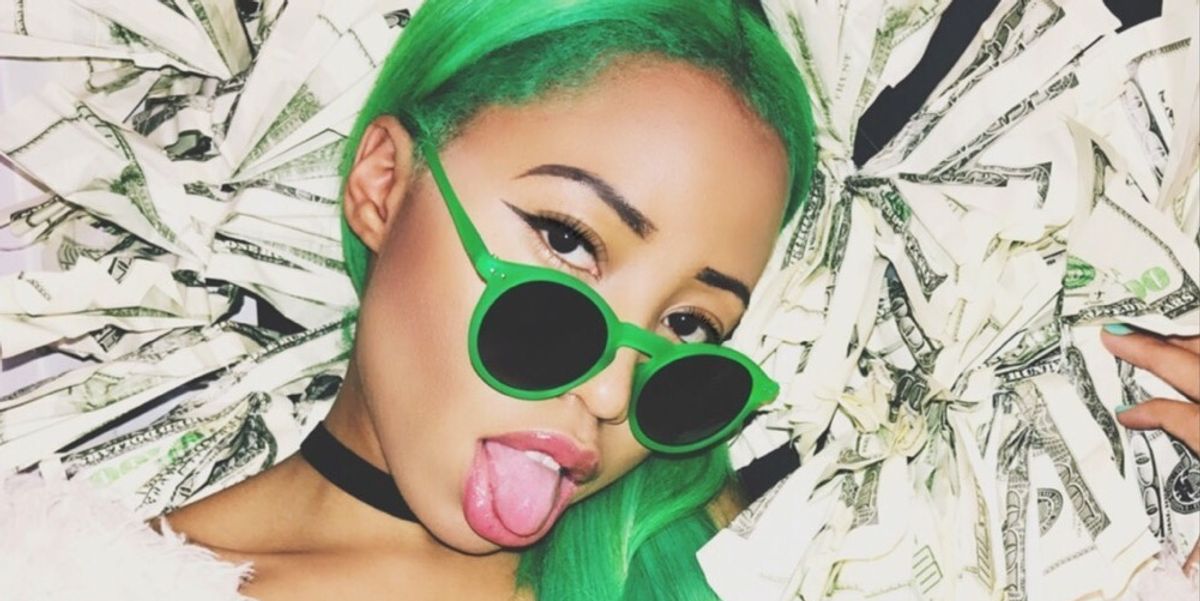 Chatting with Liana Bank$ About "BENJI," Bright Colors And Being "INSUBORDINATE"

Immediately recognizable by her bright green locks and neon sneakers, New York native Liana Bank$ has been accruing an impressive list of songwriter credits since the age of nineteen, having written for artists like Lily Allen. However, as the release of her debut solo project INSUBORDINATE draws near, Bank$ is stepping away from behind the scenes and is promoting her debut the way true performers do -- by putting herself out there. Whether it's teasing fans with consistent single releases and a colorful music video or appearing front row at this year's New York Fashion Week, Liana Bank$ cannot and will not be ignored.

We chatted with Bank$ about growing up in Queens, the making of INSUBORDINATE, and coming to love her unique sound -- alongside the premiere stream of her brand new banger, "BENJI." Listen below.

You're originally from Queens, NY. How do you think growing up there impacted your connection with music?

It's really rich in culture. I moved so many times around Queens that I grew up with all different kinds of backgrounds. I was around a whole different array of people when I was in Flushing than when I was in Jamaica. I picked up from all the different cultures and put that into my music. I told myself I didn't want to put myself in one box and wanted to be as broad as I possibly could.

INSUBORDINATE is set to release at the end of this month. How long in the making was this project?

Some of the songs I've had for a really long time, like years ago, and some of the songs are like two weeks old. I've been with my management team since December of last year so we've just been going for it.

The project is very upbeat and positive. Would you say that was the mindset you were in while you were making it?

I think my mindset in general is usually positive. I'm not going to say every single day is squeaky clean, but my message is really about overcoming obstacles to get to the other side; that's what I've been experiencing being in this industry. I definitely feel like that's my main thing, overcoming obstacles and winning.

One thing that stuck out in the "LVLUP" music video was the use of light. Do you have a special relationship to bright colors?

Honestly yeah. I have an addiction to light in general. It resonates in me and makes me happy. I bought the sneakers, maybe four months before the shoot. I had bought them originally for a show and then thought they would be dope for the video. I passed by the train station we shot at with the lights in it everyday. I thought it would be so sick if I just sat on the escalator. Everything was super simple. I shot one scene in my apartment, in the train station, and then in Times Square we did it guerilla style.

It seemed very effortless and natural.

It was super chill. I called my friends to be in the music video and they asked what they should wear and I told them to wear what they wear on a regular day. It's not a production, this is real. We had so much fun.

Who are some of your biggest musical influences?

People with weird, unique voices. My voice is super raspy and I hated it growing up. I was in choir and my voice was so different I could hear myself out of everybody else. I hated the attention. I even stopped singing for a little while and just kept writing. But then I started discovering artists like Sade, Lauryn Hill, Norah Jones, and they all had these really weird tones and stories to their voices and it was amazing. It was a whole new world for me. They were really telling their truths and the way they sang it it just hit me in a way that other music hadn't.

So who would your dream collaboration be with?

You were a front row fixture at some NYFW shows this year. What's your relationship with fashion?

I've always had a crazy connection with clothes. My mom would always tell me that I was the best child and I never gave her any problems, but if she tried to tell me what to wear I would cry. As a little kid I knew what I wanted to look like for school; I had my vision. It makes sense because even to this day if someone tries to tell me what to wear I'm like 'no'. It's how I express myself.

What's next for Liana Banks?

We're probably going to lock in a deal somewhere and take it to the next step. Right now everything is super indie but we have a lot of people interested and I think the next step is just to get a real budget so we can actually do the crazy things I have in mind.

INSUBORDINATE is out October 28th.