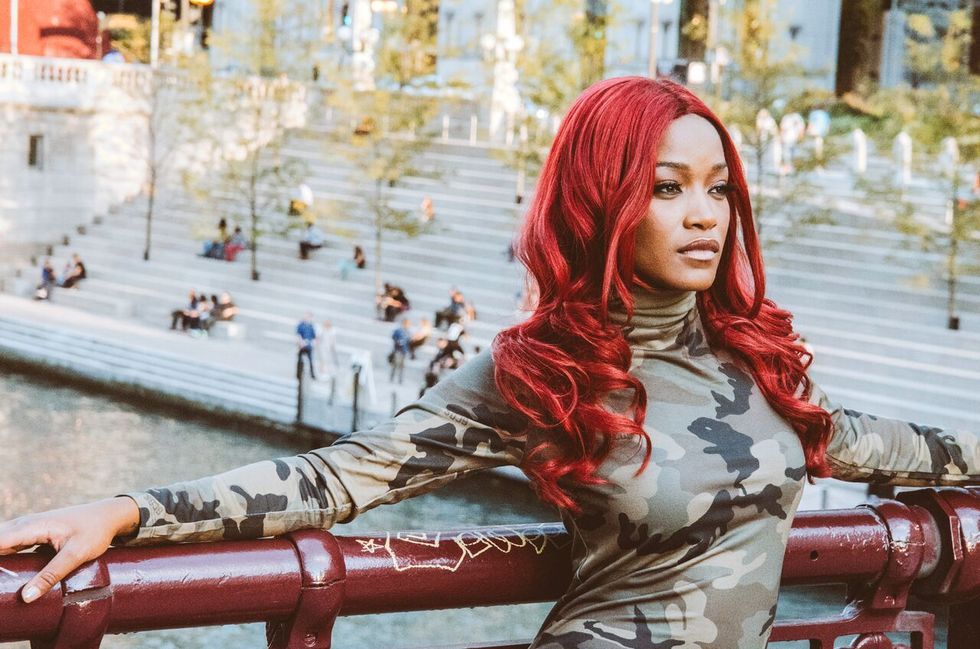 Chatting With Keke Palmer About Her Stellar New EP, 'Lauren'

Keke Palmer has been a force to be reckoned with since her big break in the 2004 film Barbershop 2: Back in Business. Since then, she has also acted in Akeelah and the Bee, True Jackson, VP, and Scream Queens, among countless other shows and movies, and has released two albums, So Uncool and Waited to Exhale.

Today, she dropped her visual EP, Lauren, presenting the world with her newest, boldest self.

Pairing up with producer and songwriter Sean Garret and with Lil Yachty and Dreezy, she explores a diverse range of emotions, from vulnerability and romantic doubt, to empowerment. The EP is stitched together with interludes that serve as meta-commentary on both the production of the album and on Palmer's journey to self-love. We chatted with her about naming the EP after her birth name, bringing emotion to her music, and as with any good conversation, how aspirational Rihanna is.

Could you start off by telling us about the process of creating Lauren?

The process has been pretty thorough. I've had the outline since I wrote, "I Don't Belong To You". I roughly knew what type of project I wanted to put together for the people that support me. I really, truly, appreciate everything they've done, especially with my music career. I haven't always had the confidence in myself, so I really wanted to give them a project that would help them to see my journey of accepting myself and coming to the place where I can put a project together that expresses where I am now and really feel like I didn't hold back.

Yeah definitely. I've consistently done music all my career starting with my first album, then to my mixtape that I dropped when I was 18, and even between that time I've had tons of records I recorded for an album, but I think there are always different phases you go through as a creative, and I think I'm most excited about this phase because I feel like finally I see myself as the artist that I've always wanted to be. And of course, without those other three projects, I wouldn't be who I am today. So this process was different, because of those other projects I'd gone through and knowing what I didn't like then and what I do like now. And knowing what I wanted to express that I didn't express before. And I think that's why the process was so thorough, because I had so many other experiences and so many other projects before, so I was ready for this one to make its mark as me being my 23-year-old self.

The EP is named after your birth name, Lauren. How did you decide on that name?

When I even thought about the concept for the whole thing, it wasn't like I knew in my mind, "I'm going to name this Lauren". I knew what I wanted the basis of it to be. I knew I wanted it to be visual, I knew I wanted it to have interludes, there were certain things I knew I wanted it to be, but the Lauren thing, I always leave my concepts open so other things can let in, and then the whole Lauren aspect of it came in when I realized that a big portion of what I'm saying is, "This is the girl that created who you know today. These are the characteristics; this is the foundation. And this is the person that is beyond the perception of the fame created under the career I've built under the name of Keke Palmer." It just felt like I had to name it Lauren because it so much epitomized the sentiment of the EP.

I was reading a bit about your song and video, Reverse Psychology, and I saw you spoke about your concept of shadow kids in the video. Could you elaborate on that concept a bit?

Sure, yeah. Shadow kids are something I've been putting in my music since Enemies. They represent different character traits of my subconscious [like] my fear [and] my excitement. Shadow kids represent my inner voice, and they represent my inner strength, and they got my back at the end of the day. It's really the inner voices. I visualize it and materialize it in my music as shadow kids, but honestly, it's the inner voices that you tap into when you need help and when you're unable to be yourself that's the voices that's telling you it's ok to be, and they got your back. And representing your emotions, representing the things you're maybe too afraid to say or speak about.

Do you think it's useful to have a visual element to materialize shadow kids?

Yeah, of course. I definitely felt it was necessary to have them in Enemies, Reverse Psychology, [and] in Yellow Lights. When I go on tour, I would love to have them. There's layers to it. I've had them in some [songs and videos], and some of them I haven't. But people who follow my music will understand that that narrative or that undertone is always there.

What is your favorite song to record on the album? What was hardest to record?

My favorite song to record was probably Jealous because it's so throwback and it's talking about Chicago, and I love the attitude of it. I just felt the energy. Hands Free was hardest on a critical sense. Currently, Hands Free is my favorite, but I know when I was recording it I was very very critical- I wanted the vocals to be on point. Even more than the notes, I wanted the energy of the record. Because there's so much more to creating music than just being a good singer, honestly. You have to add the attitude. I really wanted to make sure that came through.

It's all about emotion, too, right?

That's what separates it! The reason why people like Whitney Huston- yes she hits notes, but people love her truly because of the emotion behind those notes. Even if you're not hitting those notes you can still find ways to bring emotion to the table. There are plenty of great artists that do that. And I feel like sometimes I was lacking that and totally depending on, "I can sing" but that's not always [what it's about]- nobody can feel your emotions on the record. I grew up performing in church. And performing and singing that comes so easily- its so easy for people to see you, and touch you, and feel you but when you're listening to a record at home, you're not able to see the person all the time. So you want to be able to feel the emotion even when you're not able to watch their visual video. For me it was a real process, growing up listening to Rihanna, I will always love that about her. I love her voice, but I also love the emotion she can put behind her record. That's the magic. That's what makes you want to listen to an album over and over again, is like "Damn, I can feel that emotion!"

I think of Beyoncé, too.

Beyoncé! Beyoncé! I remember as a kid [hearing] "Ring the Alarm," and just being like, "Beyoncé is pissed. Move out the goddamn way, cause she's gonna kill your ass!" Like literally, I felt the emotion of that song legitimately. The same thing with Brandy. Her voice is so genuine and vulnerable.

I was also really interested in Reverse Psychology and you reversing roles with the guy you're singing to. I'm wondering if you think of the song and the album as feminist?

I can't say that my intention is necessarily to be a feminist, but I think I have a lot of feminist views and values and I definitely try to push female power through my influence. I try to do the same thing for millennials in general. But I think being a female and an African American female, people who are also female or African American immediately relate to that. Of course, coming from my culture, I think it's always important as a black American for me to be able to tell that story, because I know that story as well as I know the story of being a female. So I try to always put those different types of influences in my work of those positive messages that keep us going. I'm very much so always looking and watching and getting inspired by what's happening in the world. Even if I can't immediately relate to something, it still inspires me. My main thing that I try to do, is I want people to be empowered. Whatever subgroup you relate to I want you to be able to listen to my work and be a part of my work and feel connected to me, but not only me, to other people that are different from you, that you feel that universal thing. I'm talking about everything. There's nothing that's being held back. Even with I Don't Belong To You, [which] covered sexuality and sexual fluidity, I'm all about acceptance and understanding, and I love telling those stories through my music and my art.