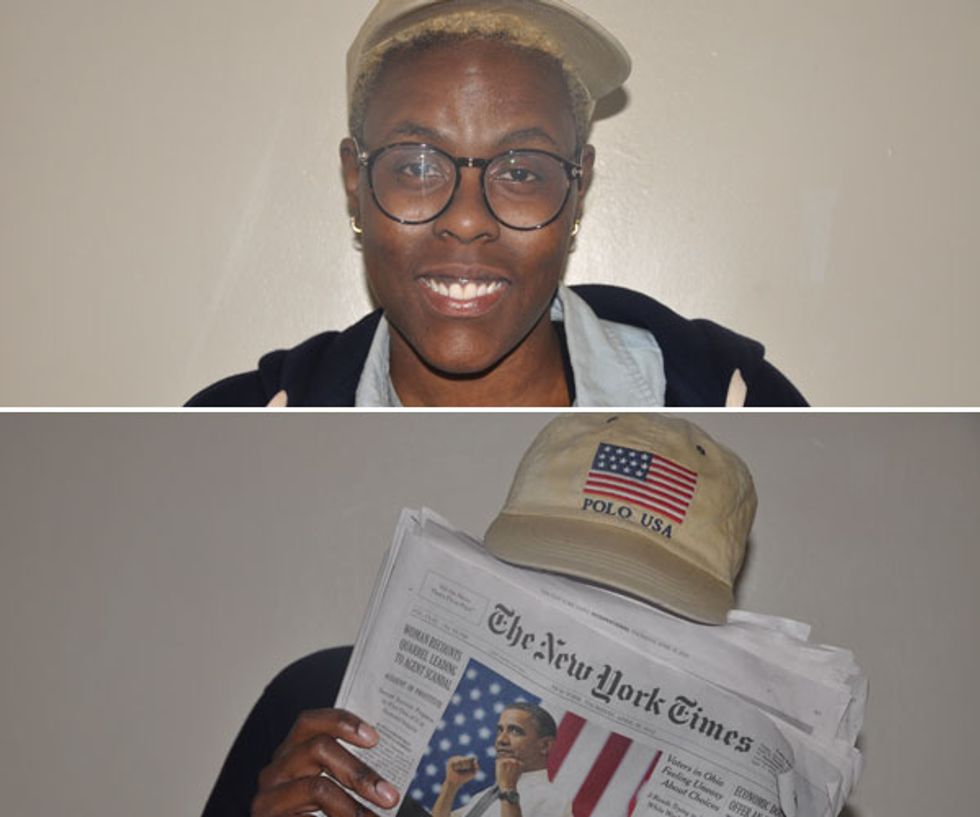 DJ and promoter Helen Harris thinks Brooklyn could benefit from a little more bass. Harris, who has DJ'd at a number of venues throughout the city including the Ace Hotel, Public Assembly and the Bell House, says that although she's all for playing crowd-favorites like Prince and Madonna, after a while all the parties she was going to started to sound the same. Particularly absent from playlists, she noticed, was Southern hip-hop, including artists like Waka Flocka Flame and Juvenile.

So Harris and Adam Radakovich, of the rap group House of LaDosha, started the queer Southern hip-hop party H.A.M., an acronym for the cities Houston, Atlanta, and Memphis, at Tandem bar in Bushwick. The monthly party started small, with a turnout that was mostly Harris and Radakovich's friends, but now, Harris says, the invite list has nearly 3,000 people on it. Here, we ask her about her affinity for Southern music, the queer dance party scene in Brooklyn and her secret to staying up late.

How did you come up with the idea for H.A.M.?

I wanted to play what I wanted to hear for people who wanted to hear it. And what I love most is Southern hip-hop. Adam also loves it. From there, we wanted to start concerts. Artists from down South don't usually tour here because they just don't have enough of an audience to draw a crowd. We wanted to support, list, promote, and show enthusiasm for the type of people who make the kind of music that we love. We brought La Chat down from Memphis, and it went really well. We're going to bring her back this weekend.

What do you think H.A.M. adds to the queer party circuit?

This is a party where people go to actually have fun. You see people smiling and dancing really hard at our party. H.A.M. is a gay party because me and Adam do it [and we're both gay], but we always invite guest DJs who draw their own crowd. People come for the music. It's bigger than being gay. It's not about gayness, it's about wilding the fuck out. At other parties people are uptight and really self-conscious -- you see more people outside smoking and talking than on the dance floor. But not at this party.

Did you grow up in the South?

No. I grew up in Milwaukee, but my family is from down south. Culturally, they're not identical, but the pace is really similar. A lot of people I knew spent summers in the South and would bring music back.

When you're not DJing, where do you hang out?

I make a point to go out. I really like to go to other people's parties. I go to Amber Valentine's dance party at the Woods in Williamsburg called Misster. I go to Trap Rap Fridays. They play trap music and down-South music, which I love. My friend Elliott (also known as DJ ++4eva) does raves.

Do you have a favorite dance craze?

What's your secret to staying up all night?

It's mostly about going places that you don't want to leave.

What song always gets people dancing?

Juvenile's "Back That Azz Up," "Yanking" by Lady and Waka Flocka's "Round of Applause."

What's the hardest thing about organizing this party?

What direction do you see queer nightlife in Brooklyn going?

I have no idea. Pretty much every good party has someone queer involved in it. We're a part of making culture.


The next H.A.M. concert is tomorrow, April 28th at Public Assembly in Willamsburg. Special guests include La Chat, House of LaDosha and Girl Unit. The free dance party is the first Friday of every month at Tandem Bar, 236 Troutman Street in Bushwick.