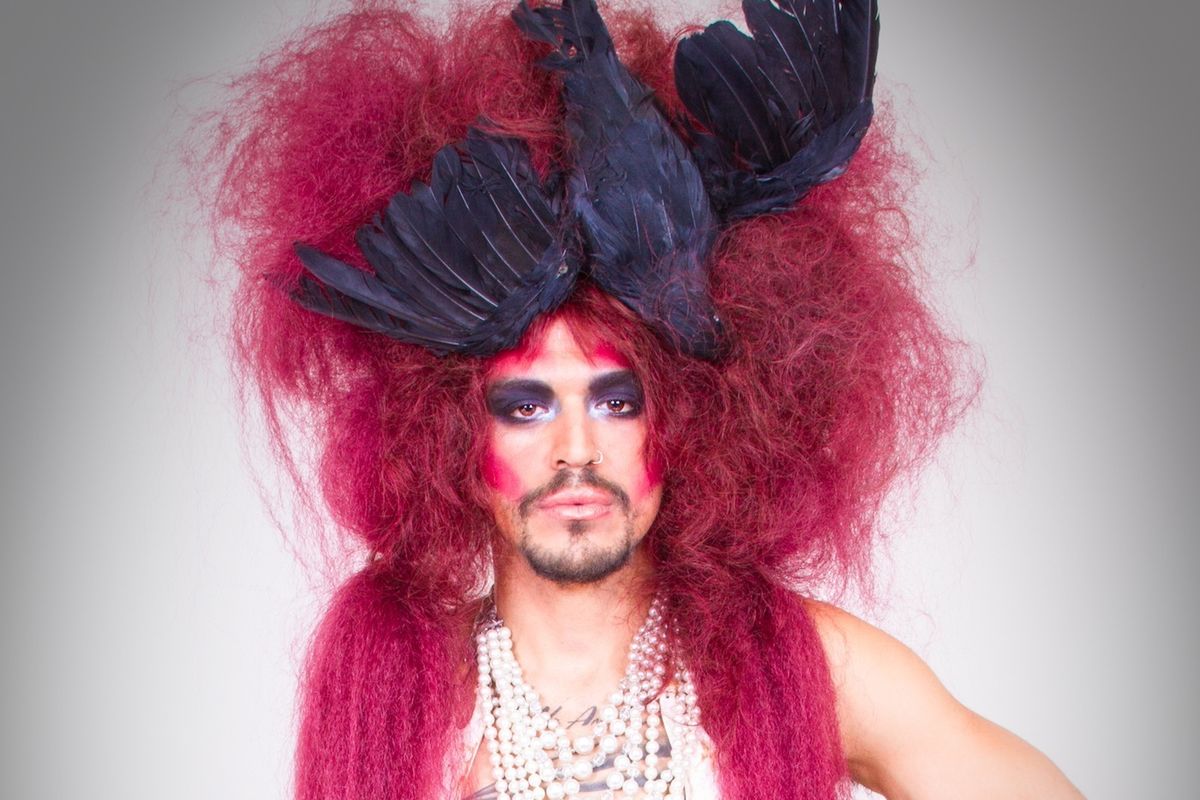 In New York City's gay nightlife scenes, there seems to exist a line between sexy boys in jockstraps cruising on the dance floor and drag queens lip syncing for tips. While gender maybe be part of our cultural dialogue in a way it never has been before, sometimes it can feel that mainstream gay culture lags behind when it comes to conversations about gender fluidity and androgyny. But genderfucking go-go goddess Rify Royalty is leading a revolution in Brooklyn with Straight Acting, a monthly party celebrating its one year anniversary this week. Straight Acting trolls gay men who uphold rigid definitions of masculinity when it comes to who they'll sleep with, all while shrieking "Yasss queen!" at the latest episode of RuPaul's Drag Race.

At Straight Acting, bearded boys in mini skirts and pastel wigs can celebrate their sexuality alongside female burlesque dancers, trans women and men, and an entire spectrum of gender identities. Ahead of the one year anniversary party tonight at Williamsburg's This N' That, which is powered by Scruff -- the very app whose dating-and-hook-up preference choices inspired the party's name -- and will feature music by DJ Nita Aviance and performances by Charlene, Manifestany Squirtz, and more, we chatted with Royalty about why he created the party, the state of gender in Manhattan nightlife, and the power of trolling.


What is your gender identity?

I'd say I identify as a cis male, but I don't know that I always have. I came into that [identity] very recently, and I'm learning to accept that that's OK. For a long time I felt very ambiguous -- I felt genderless.

Do you consider yourself a drag queen?

I do, yes, in the context of what drag is. I lip sync, I wear clothes designed for the opposite sex, I create a character and perform as that character. I don't think drag necessarily has to be feminine or masculine, and my drag has never been about female impersonation as much as it has been about character development, so to speak.


One of the problems some queer people have with drag is that it mocks femininity, and there is certainly a huge undercurrent of misogyny in gay culture that does sometimes come out through drag. How do you prevent the drag you're doing from receiving similar criticism?

For me, I don't take the dress up portion of drag to the extreme of hiding a bear and making sure that things are contoured to look as feminine as possible and wearing pads to make my body as womanly as possible. For me, it's about taking elements that I enjoy like clothing and hairstyles and makeup and twisting them around and making a drag character that's not necessarily a woman, but something along the lines of [Rocky Horror Picture Show's] Dr. Frank-N-Furter or something. I try to make sure that my acts aren't directed toward women, they're more about me.


It seems like your drag and exploration of gender is more about genderfucking then female impersonation.

I like being a boy in heels and a boy who challenges masculinity as opposed to trying to be feminine. I think being feminine is beautiful and I think that masculinity has its own responsibilities that people have bestowed upon it, and I want to challenge that and say, "I don't know about you, but I don't think masculinity has to be this way." The way that I'm giving it to you can still be sexy. Create your own masculinity. I'm not saying that I've created something new -- genderfuckery has been around forever -- but currently it's missing in New York City nightlife, and there's a divide between drag queens and men in general. It's "he's a go-go boy and she's a drag queen" and those worlds can't mix. But I said no, I'm going to do something different.


And that prompted you to create your party, Straight Acting.

I was working a lot of parties and strictly being booked to go-go dance, and I was getting bored of being expected to wear certain things and behave a certain way to generate interest and entertain people. I also really loved performing and fagging out, and I needed a platform where I could do that. So I started performing more in Brooklyn and creating more looks, and I had ideas for performances in my head, and people were giving me a platform to do them at these parties. I think my first gigs in Brooklyn were Hot Fruit and Bathsalts, and I was fully embraced doing whatever I wanted to do, and it was fun. But I was still go-go dancing, and I started noticing that some people had stopped booking me because the fantasy of the sexy go-go boy that they had had kind of deteriorated. And I'm ok with that, that's their loss.


It seems like Straight Acting came out of you wanting to express different forms of sexuality that weren't being represented anywhere else.

Well sexuality and gender and drag and identity -- I wanted to make a party for everybody, really. Specifically for people who wanted to challenge their gender roles and gender identities.


Straight Acting obviously uses the language of hook up apps, where people feel comfortable really harshly defining what they're into. Straight Acting really trolls that "masc for masc" culture -- can you talk about the power of trolling and why those assholes deserve to be trolled?

Since apps have been a thing, people feel very comfortable with that kind of dialogue, which can be very hurtful. I'm not shaming anyone for being masculine, I'm more about celebrating [different interpretations of masculinity and femininity]. No one on those apps is saying "femme for femme" or "femmes welcome" -- there seems to be a desire for "masculine" men. Using words like "straight acting" and not actually behaving in that way is giving them the middle finger because we're gonna do what we wanna do, and hopefully they'll realize that behavior is silly. There's nothing "straight" about getting on all fours and getting fucked by another man.


Isn't it crazy that that's the language? People who are literally looking to get bent over and plowed want someone who is "straight acting" when the least straight thing you can do is take a 9 inch dick up your ass?

I've had people not be interested in me because I wear nail polish. I think when I was a younger gay I allowed those things to bother me, but now -- I'm cute, I'll find someone else who doesn't give a shit about my painted nails, and maybe wants me to paint their nails. And that's Straight Acting.


One of the genius things you've done with Straight Acting is having your hosts put photos of themselves in crazy looks on Scruff and use that as a promotional tool. Did you ever leave one of those photos up and get some interesting responses?

Sometimes my hosts don't have Scruff and I'll chose a picture and use it on my account. Usually I change them back quickly, but one time I made one for Untitled Queen and I forgot to change it, and people were messaging me saying "I think you're great, I wanna get to know you." And I had to say, unfortunately that's not me in the photo, that's another queen, but I'll let her know that you fancy her. I'm seeing more trans people and more queer people on the apps, and that makes me really happy.


Do you think that Straight Acting as a party could happen in Manhattan?

I think it needs to. It's a very Brooklyn party, but it definitely should happen in Manhattan. I feel like that's where it is needed the most.


In Manhattan nightlife there are much stricter lines between the sexy "boy" parties and the drag shows, but it feels like that's starting to blur. Now you might see an ad for a huge circuit party and the go-go boy will be wearing heels. Is that the Straight Acting effect?

I hope so. That makes me really happy to see. I make an effort to invite a lot of boy boys, who don't do drag all the time, and have them as hosts, because I know that they'd be willing to dress up, and I want them to post the pictures, so that other people will see them and say, "Oh, he went to this party in heels and a wig and he's still sexy!" And I can't expect to do all of that on my own, it's a community effort, making sure the party is present and accessible to everyone.


We were talking earlier about how there's a lot of ugly misogyny in gay culture but your parties always seem to include cis women in your line-ups. Can you talk about that decision?

It's very important that women are included -- both cis and trans women -- in our scene and in our world. A lot of gays want to dress like women but don't want to party with them. The problem isn't as big in Brooklyn as it is in Manhattan -- there's a lot more diversity in the Brooklyn scene. Straight Acting is about overcoming obstacles and breaking down gender norms, so I think women are very important to the party.


When Straight Acting started you had a dark room set up on stage -- do people actually hook up there or is it just part of the fantasy?

It was part of the fantasy of the party, that people could fag out and hook up in looks. I thought that would be really sexy and cute. But as the party grew, the dark room was not as successful, but I also didn't set out to make it that way. It was there if you needed it, and a lot of people didn't need it. A lot of people were just making out on the dance floor, and I was just happy to be creating a space where people could dance, get closer to each other, make out, and take someone home.


How happy does it make you feel to see two boys in heels and wigs making out on the dance floor?

Especially the hairy legged boys in mini skirts, who are feeling hot and feeling their damn fantasy! I've done it -- I never really make out with people at Straight Acting, I don't have time because I'm always running around. I've hooked up with a few boys I knew, who were in dresses and it was so hot, there was lipstick all over the place. And I've gone home with boys too, I just tell them, "Wait for me, I'll go home with you at 3:30."