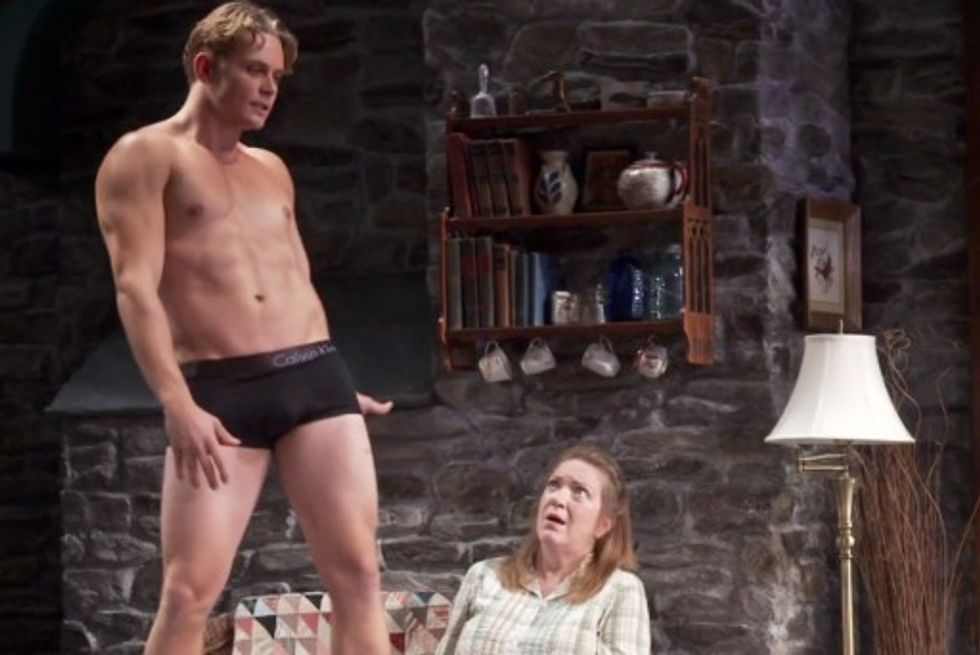 Ok, we'll admit it: one of our favorite aspects of Christopher Durang's utterly entertaining new Broadway comedy Vanya and Sonia and Masha and Spike -- a hysterical, modern send-up to Chekov -- was seeing one of our most beloved former soap stars Billy Magnussen strip down to his skivvies. Magnussen, a star of the erstwhile CBS soap As the World Turns, plays Spike, the much younger airhead/aspiring actor/lover of the famous actress Masha (played by Sigourney Weaver). After seeing the play -- which centers around Masha's trip home to the country to visit her brother and sister Sonia (Kristine Nielsen) and Vanya (David Hyde Pierce), and which features Magnussen dropping trou in one memorable scene -- we called up Magnussen for a chat about keeping his Magic-Mike-esque body in shape for the role, As the World Turns' demise, and, for good measure, we threw in a question or two about Chekov.

Can we get some tips on how you keep up your very admirable physique?
I do the eight meals a day thing -- I even eat during the show. And I don't eat carbs. On Sunday, I have a cheat day and I eat half a pizza and bagels, all in one day. I go to the gym twice a day for this play. It is hard to be in that good of shape. I am not meant to be in this good of shape. I have to bust my ass. When I am not doing this type of play, I eat what I want.

What did you think of the role of Spike when you first read it?
My first thought was that he's a fun character -- I didn't read him as dumb. I read him as innocent. He is just kind of experiencing life and enjoying himself. He isn't malicious or anything, he is just curious about life. And then he meets these weird people who sort of get crazy.

I get it. Chekov's not for everyone. I don't love Shakespeare and I feel bad about that.
Oh! I love Shakespeare. My dream role is Iago in Othello. And I could nail Hamlet -- he has blonde hair, blue eyes, he's my age. It would be great. I am serious.

What's it like backstage at VSMS with all those veteran actors?
Backstage is chaos. Everything is very tight -- there's not a lot of room but it's great and I love everyone. It's been about a year that I have been doing this show with these people and it's like a family.

Had you seen a lot of Sigourney Weaver's movies before this show?
I'd never seen Alien until I started doing this show. And I watched Frasier after I met David. I watched all eleven seasons and I would say, "David, I have been falling asleep to your show every night." I don't know if that was a compliment.

If you had a night off, what would you see on Broadway right now?
I would go see Matilda. I heard it's good and I'm going to be on their softball team. Our show doesn't get their own softball team.

How did you audition for this? Did you have to do the crazy dance moves that you do on stage?
I had to try out like five times. My last audition was in L.A. and I went to meet all the producers and it was kind of chaos in the room. I was doing the scene and there was a piano in the room and I can't play piano, but I tried. I was just banging around on it. I can play guitar. I play in my band, Reserved for Rondee.

We here at Paper were big As The World Turns fans. Are you sad that it was cancelled?
I was sad when As the World Turns ended, but I'm not that sad about [soap operas] going off the air. I appreciated it and I think they're a very cool thing, but times change.