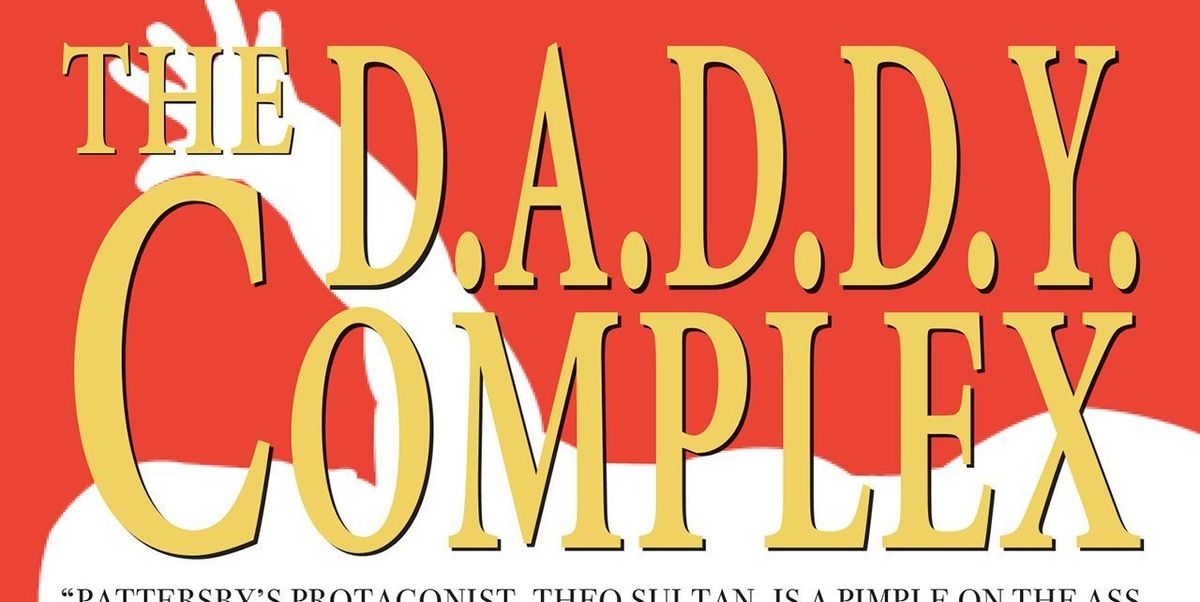 In this paranoid climate of feverish, hyperbolic displays of bastardized Americana (thanks, Trump!), writer Ryan Sandoval has decided to flip it on its head, in his new humor novel The D.A.D.D.Y. Complex. Sandoval, under the pseudonym Luke Pattersby, lampoons the Jason Bourne, Jack Ryan/Reacher trope--aka lonewolf patriot (usually grieving their own father's ultimately death or disappearance) who is divinely skilled in martial arts/gun-fire/technology, taking on foreign enemies one punch at a time. For America! His hero(ish), Theo Sultan, exalts himself as the portrait of the ultimate nationalist, who puts the safety of this country over even his own family (or in Theo's case, families).

In this parody of those bestselling thrillers sold in airports and grocery stores, Theo must battle against a maniacal, foreign business man who hatches a plot to kidnap the world's most famous dads. Teaming up with a "sassy hacker girl," Theo must stop his foe, and potentially find his own father, who'd been missing for decades before.

D.A.D.D.Y. Complex examines the holes in these absurd, hyper masculine caricatures that seem to dominate certain parts of modern literary culture. You realize, despite all their self-imposed-grandeur, they're kind of deadbeat assholes. We talked with Sandoval about Theo Sultan, the myth of the rogue patriot, and why this book is so timely.

What fascinated you most about these caricatures initially? When did you decide you wanted to lampoon them?

How needlessly OCD these lone wolf action heroes usually are. For shabby tough guys they're all super fussy. They all want things done their way. Jack Reacher in particular is supposed to be a salt-of-the earth drifter, but has all these unnecessary rules where he only pays for things in cash kept in his sock and throws away his clothes whenever he buys new outfits. Also he buys new outfits instead of washing his clothes. And he's probably killed like 75 people at this point - many with his bare hands. But the guy still cracks Garrison Keillor style jokes about "diner coffee." He's a genuine psychopath, but relatable to dads I guess?

So with The D.A.D.D.Y. Complex I wanted to parody bestselling thrillers because its a genre that is so ubiquitous, but never really joked about. Your John Grishams, Lee Childs, James Pattersons. Those big thick books with glossy covers sold in airports and grocery stores. Millions of people worldwide consume these things. I think Lee Child just put out his 21st Jack Reacher book today. Someone had to pay homage.

These books usually fall into the "thriller genre" which is a funny sensation to evoke in a reader. Like you're being "thrilled." Not fully scared or romanced, but thrilled. It's kind of amorphous. I guess its a little bit being stressed, but also titillated. Low-key horny about taut political intrigue? Right around the time Fifty Shades was making it okay for office workers to read about nipple clamps I started reading some Bournes and Reachers and discovered that they're super violent and very sensual. Like "brain matter" gets described a lot, as well as "steam drops clinging to panties." It's funny to imagine millions of "normal" people secretly reading about things that are considered taboo or inappropriate.

All those things seemed pretty great to joke about, so I just tried writing an honest thriller but elevated all the tropes to ridiculous degrees but ground the circumstances. Like instead of having disposable love interests in his past, my hero Theo Sultan has started and abandoned three entire ex-families. I pushed him passed the point of anti-hero and into "piece of shit" territory.

Did you always want to write it in book form? Or did you ever think of it as a screenplay?

Truth be told, I originally intended to share this tale through the oral tradition at storytelling festivals and gothic sleepovers a la Mary Shelley and Frankenstein, but I have the memory of a potato and am scared of castles.

I studied English in community college and then again in "real" college, and always wanted to poke fun at the cross-section of things like summoning the Muse, and being writerly, with commercially-driven, formulaic page-turners. They're both valid reasons to make things, I think. In my heart of hearts I always wanted to be a Dead Poets type professor screaming about Milton, but I suppose writing a 200-page comedic thriller is the next best thing. But I wanted to parody the concept of a "novel."

I use a pen name. My book has an "Author's Note" that is very defensive and immediately starts attacking critics. There's a "Dedication Page" that front loads all the business people who made this story happen, then thanks Geoffrey Chaucer. Books are a funny thing!

Who are some writers who've inspired you from the get-go? Ironically and non-ironically.

I genuinely enjoy real life bestselling author Nelson DeMille, who wrote The General's Daughter. He was even kind enough to provide a quote for my book cover. He calls my main character "...a pimple on the ass of American literature." Lot of love there. Ironically, I think James Patterson is entertaining. As a TV critic, I covered a show of his called Zoo about how pesticides from an evil pharmaceutical company made the world's animals rise up against humans. I respect big swings like that. Just keep me entertained!

Why do you think, even with how cynical our country is today, this kind of character continues to be so popular?

I mean, I get why a "shoot first and ask questions never" maverick ideal is appealing. Problematic, but appealing. Escapism, the need for "justice," and nostalgia for simplicity--even if that same simplicity makes things super terrible for folks like my Mexican people. A frustration with "red tape." You want to tag a long with a character who sticks it to the greedy politicians and stands up to local bullies. That's why Trump's had the following that he has. Someone like him presents this strongman persona that oversimplifies complex problems and then positions himself as the only one who can solve them (see: demagogue).

The real world is way more complicated, obviously, but these heroes let the reader focus on a single character dealing with a lot less. Like, "Ah, this small Mississippi town has a meth syndicate, run out of the only public library, that needs to be taught some manners - fist first." Everyone can get behind that sort of thing, one book at a time. Surprisingly, these main characters are also very anti-politics. They hate career politicians and bureaucracy. Even though those things are totally necessary--but I hate how the IRS works and how government websites are usually shitty, so I get why readers get all riled up.

"Daddy complex" is obviously a trope that's just become a mainstay with these Uber-American heroes. What do you think the deal is with that? Where is America's deadbeat dad REALLY hiding out?

There used to be this couple below me who moved in while the woman was pregnant. In the days leading up to the birth, the dude just got SO invested in perfecting this one song he was working on. To the point where it seemed rude to his lady. And it's weird because this is the second time I'd lived next two new parents where music took on this metaphorical last gasp of whatever era these guys thought they were being yanked out of.

Eventually someone got non-lethally shot in front of our apartment and the couple moved across the country. The point is, there's this lone-wolf archetype we celebrate in pop culture, and the other side of that coin is the man child. In both forms, the idea of settling down or growing up is shunned. Like, that's when the fun and adventure supposedly ends and you have to tone down your bullshit enough to care for a helpless thing.

So as far as a daddy complex goes, which basically means being obsessed with your "father" in a good or bad way, there's this American ideal of "leading," and creating a world for the next generation. I think people grow up with examples of guardians in their lives and then get older and begin to disagree or agree with how they were provided for, and there's all these complicated emotions. Resentment, understanding, a yearning to be protected, or start protecting on your own. It's all very messy.

In terms of where our deadbeats are hanging out, I think a lot of them are already in families they got fooled or coerced into starting. I mean, be a dad or don't, but make sure you're doing it for a good reason. I see people I know who love taking that family step, and then I see others who are just putting a lot of stress on their kids because they're not fully committed to moving on, and end up smoking weed and posting about it on social media.

"Sassy Girl Hacker" is a frustrating, hilarious stereotype that crops up in your book that hasn't been explored as much as it should. Who are some of your favorite Sassy Girl Hackers who almost ALWAYS save the day?

Well, there's that girl with the dragon tattoo. Her name escapes me, but I do know she at least had a dragon tattoo and was a girl. Chloe from 24, Abby from NCIS plus Kate from Hackers. Was Claire Forlani's character in Antitrust a hacker? Hacking in pop culture is a funny thing because it generalizes a complex and boring process that no one knows about except experts. So in shows you'll just see a red bar on a computer screen that says "download processing." Or in that movie Blackhat the camera went into the motherboard nodes to make software seem exciting. Software is just ghost math. I also like how hackers are portrayed in pop culture, with Alice in Wonderland tattoos and chunky boots. I used to skateboard and always laughed when "skaters" would be on screen.

These hyper-American ideals—i.e. crushing foreign oppression, etc—are really pervasive, especially with this current election nightmare. Do you think Trump secretly (or not so secretly) sees himself as a Jason Bourne/Theo Sultan type?

Donald Trump is a walking bestselling novel, and this election cycle has been a heart-pounding thriller. Do not be surprised if this election is sold in the candy aisle at Vons this holiday season and your mom and dad can't put it down after the presents are all opened. Trump's first in line to bring up all the conspiracies going on in Washington and the media, and talk about nuking countries, and being a disgusting monster to the LGBT community, to minorities, women and immigrants. His main thing has been to make sure people feel terrified about all the unfamiliar elements of the world. He's thrilling people! Dummies forgive him because he's a big mouth maverick. He totally thinks he's this rogue maverick taking down the Beltway Bandits.

Pre-order The D.A.D.D.Y. Complex via Devastator