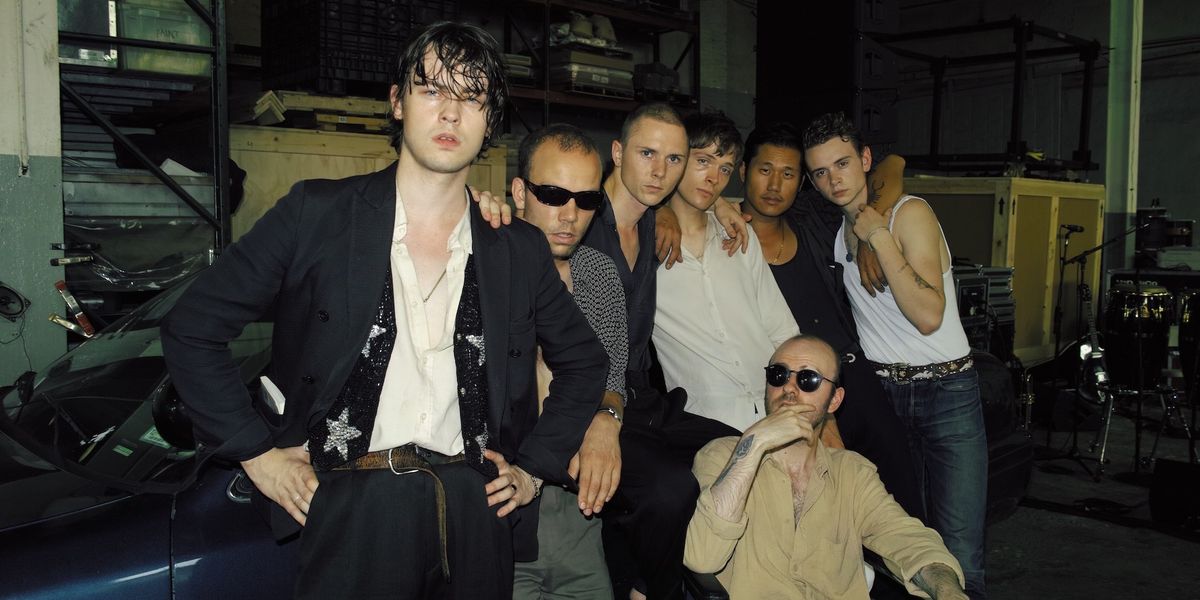 Elias Bender Rønnenfelt was born in the wrong decade. The frontman of the Danish punk outfit Iceage is only 24, but would not seem out of place standing in CBGBs next to Patti Smith, or Richard Hell. It's perhaps a tired comparison for any rocker, but the emotional, uninhibited music Rønnenfelt makes nevertheless feels more suited to the raw urgency of '70s and '80s punk acts than much of what's out there today. This should be no surprise to longtime fans of Iceage, a band that has, since its first studio album in 2011, made a name for itself with a hybrid sound that draws on everything from classic punk to country. When not making music with Iceage, Rønnenfelt helms a side project, Marching Church, which has a new album Telling It Like It Is (out now via Sacred Bones). Like Iceage, it's a similarly multi-genre affair, incorporating blues elements and jazz rhythms, but it's also his most topical. Just take the song “Inner City Pigeon," in which he sings: “I saw people put their power on display / Like pigs who shoot dark skinned men in the U.S.A. / They might be executive heroes amongst their friends / But no soap will make their hands smell clean again." It's moments like these when it becomes clear that, behind what Rønnenfelt may term his “existential fucking bullshit," there exists in his music nonetheless a desire to tackle weighty topics, and to do so by reaching beyond language and hitting to the core. We chat with Rønnenfelt about his new project, below.

You've talked in previous interviews about the importance of urgency and honesty in music. Have your thoughts on the subject changed at all as you've developed your sound?

I think urgency is important. I'd say that that's the more accurate word that you can put on music that matters, or jumps out. That's what I want music to do. Honesty… I don't think that matters actually. You can do something that's deceptive. You can lie, and it's still valid as an art form.

Your lyrics and vocal delivery are often very honest, at least emotionally. Do you ever feel any anxiety about opening yourself up like that?

Rarely… It's more this thing where you're about to get up on stage, and you can't possibly imagine that you have the capability of tapping into that thing you want to tap into. Sometimes you don't! But surprisingly, most of the time, the transformation happens from the first note, (or sometimes a little latter on). But no matter how impossible it seems to get there, usually by the very very beginning of the first song, it just sort of flicks: your mind completely alters and you forget that just a moment ago you were looking at that stage that you're standing on right now, feeling like you couldn't possibly stand there and make loud sounds into a microphone.

The reason I ask is because your lyrics seem so personal. Am I right in saying that? You did just mention deception.

I'd say there's an element of both. It has roots in a very real place -- a very true place. But you alter it. You fictionalize it. You take liberties in changing up the truth for effective purposes.

Do you see yourself trying to cultivate a persona?

I think I've convinced myself that [songwriting] has the ability to almost take distinct directions on how to alter yourself. That what you write becomes the truth, later on. This may or may not be true. I think, maybe on a minor scale, you're maybe able to kind of push your core being into different places deliberately and consciously, but I think there's also the element that you have this particular mind you're born with, or is a product of your upbringing, or whatever, and whenever you have to make documents out of that mind, you look back in the mirror and say “shit, is this what I am?"

Were you thinking about anything in particular when writing the lyrics for Telling It Like It Is?

When writing lyrics, I never have a fully-fledged idea for a song, or where it's going to turn. I never sketch out where the song is going to go… I actually hate writing. I don't “hate" it, no, but it's not an easy thing for me, and not a particularly joyous experience, either. You really have to sit down, take your brain, and wrench it like a wet cloth until something worthwhile comes out of there. Suddenly, after a while, you look down at the paper and find like two sentences and go “this could be about that," and then you know what the song's about. You can elaborate on that, but I've never ever tried just being like “oh, I should write a song about this particular thing," and then sitting down and doing it. It's always about been carving it out – forcing yourself to write. Then whatever fucking meaning presents itself later – and sometimes, I haven't really dealt a lot with these more fictional things – but even with the last song on the album, called “Calenture," that's kind of nothing about me, but about a bunch of soldiers that read their map wrong or something and got lost in the desert and are now dying of thirst. That was not even a thing I thought of: I was just writing, and, looking back on it, thought “oh, that's probably what's it about." (laughs)

It's also gratifying. Once you're further in the process and you've arranged a bunch of words in a little format that actually has this little life of its own, or presents a little rush of feeling, or a world or something, it's like incredible that typing or carving out letters can do that, you know? (laughs)

Wrenching out my brain on to a piece of paper, though, sounds terrifying! I wouldn't want anyone to see. That's what I meant when I asked if you felt nervous at all when writing.

No, I don't have that anxiety. I guess if I feel it, it's good – it's worth presenting! I don't think it's ever good enough – maybe some of the earlier lyrics are shit. There's also times where I was like, “oh, God, man, I wish I had changed that, or done that differently." But I think that it makes sense that it should be presented. I understand what you mean: exposing yourself… I don't really have that fear.

I hope that some people will get the intent. I don't know if people really pay attention or read the lyrics in general, really. But I hope that, if they do, people misconceiving it and making it about another thing – that's part of it, as well, for any kind of communication. It's communication: it has the ability to do that thing. We don't know why music works. We don't know why a rhythm kind of tricks us into feeling all these emotions and ways. It doesn't make sense that wailing over notes in a particular kind of way can strike you, but it can! We don't know why it works, but there is that thing: that if you hear the right person wail in the right way over the right notes, then you can recognize whatever feeling that is, if you've had that feeling before. That's the joy of feeling like you can relate to somebody, you know? And, if you can't relate, then sometimes at least you can step back and enjoy the atrocity that is that person, you know.

Get a copy of Telling It Like It Is HERE and catch him on tour (see dates HERE).