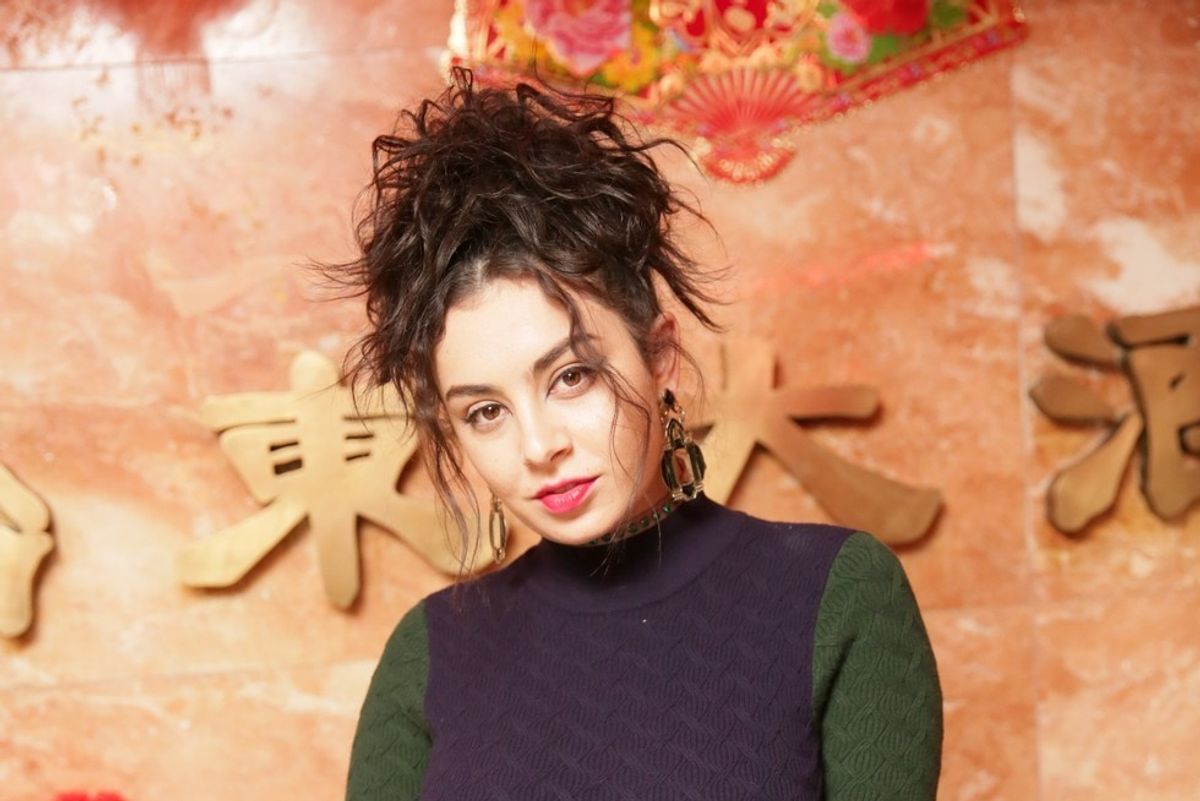 Charli XCX Answers Marina and the Diamonds Over Similar Images

Apparently they have similar taste in photographers.

What better way to welcome the weekend than with some social media sniping! Today's pop star participants are former touring buddies Charli XCX and Marina and the Diamonds, and the subjects in questions are some very similar photos.

In a recent campaign for a limited edition perfume she created for UK brand Impulse, Charli was photographed in front of a bright tropical background, promoting the citrusy scent.

It bears a strong resemblance to the art for Marina and the Diamond's single "Immortal."

The similarity isn't too mysterious: Both were shot by photographer Charlotte Rutherford. (You might have seen her shots right here, like the fierce portrait of Gwendoline Christie, or Amber Rose as feminist icons.) Lush bright backgrounds and candy colors are Rutherford's signatures, and both Charli's ad and Marina's single art certainly share that aesthetic.

Marina reportedly commented on a since-deleted photo on Rutherford's Instagram, saying "That FROOT looks familiar." She followed it up with a tweet noting "Imagery is artistic property."

fyi i'm not shading/dragging/beefing. that's not something I do. I'm just being direct and setting the record straight. 💜
— CHARLI XCX (@charli_xcx) March 11, 2016

There she explained, "I had not seen the artwork for the Marina And The Diamonds song 'Immortal', and it was not an inspiration for this photoshoot or the campaign as a whole. I've seen it now, and yeah unfortunately it looks similar." She went on to clarify that this was an unlucky coincidence, driven in large part by the needs of the perfume brand's advertising, and everyone needs to just chill out a bit and appreciate that it's Friday.

You know what, sometimes you do a photoshoot standing infront of a plant, sometimes you do a photoshoot in black and white, sometimes you wear purple eyeshadow. Sometimes you shoot with the same photographer a fellow artist has shot with. That's just how things happen in the industry I work in. The image in discussion (not this one), which a lot of fans have been making noise about online, was from a photoshoot for a fragrance brand I have been working with for a while. The point of the shoot is to make the promotional image reflective of the packaging, as I have done on previous collaborations with them. This particular scent is a summer scent, with lemons and hints of burnt orange, the design is tropical, bright yellow with pineapples, palm trees and sunglasses printed on the can. The whole brief for the campaign was based around a tropical theme, which is what the brand aka "the client", wanted. Hence the direction of the photoshoot. I had not seen the artwork for the Marina And The Diamonds (@marinagrams) song "Immortal", and it was not an inspiration for this photoshoot or the campaign as a whole. I've seen it now, and yeah unfortunately it looks similar. It was shot by the same, incredibly talented photographer, and it's a shame for both myself and Marina that this has happened. I'm not here to replicate or "steal" art or things that have already been done. What's the point in that? I'm here to do my own thing and create my own art. As I've said, the image in question, which I believe Marina had previously commented on on the photographers Instagram, was for a brand based photoshoot for a tropical, lemon scented fragrance campaign (what was I supposed to do - shoot it in the snow?!). It is not the artwork for my own album or single. That's all I need to say really. Everybody enjoy your Friday. Love to all. 💜 Tonight is the launch of my record label Vroom Vroom Recordings. Im very excited and can't wait to start releasing more music from myself and other artists that I love.
A photo posted by CHARLI XCX (@charli_xcx) on Mar 11, 2016 at 5:28am PST