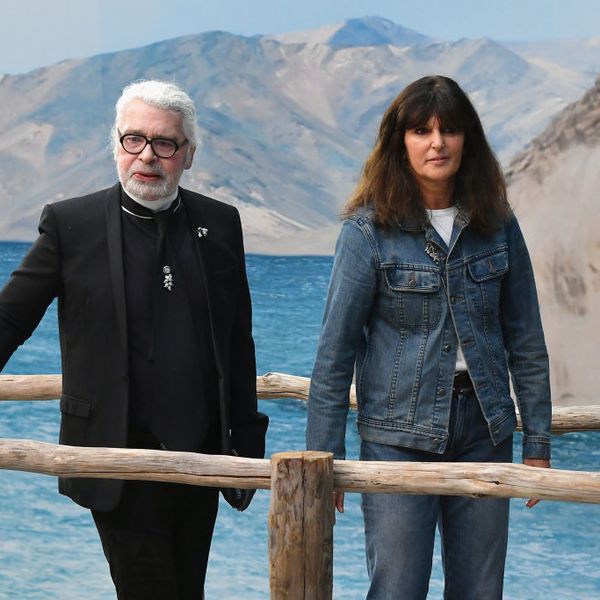 Karl Lagerfeld's legacy is insurmountable. Since 1983, the designer led one of the most iconic fashion brands of all time, upholding the heritage of Coco Chanel while imprinting his own notable aesthetic into the brand's fabric. Prior to his death, the question of who could possibly fill the shoes of such a prolific designer created mass speculation. While notable names like Marc Jacobs and Haider Ackermann previously floated around, Chanel has announced that Virginie Viard will sit at the creative helm of Chanel following Lagerfeld's death.

It is with deep sadness that the House of CHANEL announces the passing of Karl Lagerfeld, the Creative Director for the CHANEL Fashion House since 1983. An extraordinary creative individual, Karl Lagerfeld reinvented the brand’s codes created by Gabrielle Chanel: the CHANEL jacket and suit, the little black dress, the precious tweeds, the two-tone shoes, the quilted handbags, the pearls and costume jewelry. Regarding Gabrielle Chanel, he said, “My job is not to do what she did, but what she would have done. The good thing about Chanel is it is an idea you can adapt to many things.” A prolific creative mind with endless imagination, Karl Lagerfeld explored many artistic horizons, including photography and short films. The House of CHANEL benefited from his talent for all the branding campaigns related to Fashion since 1987. Finally, one cannot refer to Karl Lagerfeld without mentioning his innate sense of repartee and self-mockery. Alain Wertheimer, CEO of CHANEL, said: “Thanks to his creative genius, generosity and exceptional intuition, Karl Lagerfeld was ahead of his time, which widely contributed to the House of CHANEL’s success throughout the world. Today, not only have I lost a friend, but we have all lost an extraordinary creative mind to whom I gave carte blanche in the early 1980s to reinvent the brand.” Bruno Pavlovsky, President of Fashion at CHANEL, said: “Fashion show after fashion show, collection after collection, Karl Lagerfeld left his mark on the legend of Gabrielle Chanel and the history of the House of CHANEL. He steadfastly promoted the talent and expertise of CHANEL’s ateliers and Métiers d’Art, allowing this exceptional know-how to shine throughout the world. The greatest tribute we can pay today is to continue to follow the path he traced by – to quote Karl – ‘continuing to embrace the present and invent the future’.” Virginie Viard, Director of CHANEL’s Fashion Creation Studio and Karl Lagerfeld’s closest collaborator for more than 30 years, has been entrusted by Alain Wertheimer with the creative work for the collections, so that the legacy of Gabrielle Chanel and Karl Lagerfeld can live on.

Chanel made the announcement on Instagram Tuesday, noting Viard's longtime role as Lagerfeld's right-hand woman. "Virginie Viard, Director of CHANEL's Fashion Creation Studio and Karl Lagerfeld's closest collaborator for more than 30 years, has been entrusted by Alain Wertheimer with the creative work for the collections, so that the legacy of Gabrielle Chanel and Karl Lagerfeld can live on," the statement reads.

Rumors surrounding the possibility that Hedi Slimane would take the reins at Chanel were officially shut down in 2017. "The house of Chanel has no projects with Hedi Slimane," the brand told WWD.

Viard on the other hand started as an intern at Chanel tasked with haute-couture embroidery in 1987. As she moved her way up the ranks, she and Lagerfeld formed a strong working relationship, prompting her to accompany the creative director to Chloe in 1992. Following her five-year tenure, she returned to Chanel as a coordinator for haute couture, before transitioning to the ready-to-wear collections in 2000.

During an interview with The Telegraph, Viard detailed she and Lagerfeld's creative process, noting their collaborative approach to developing the many brands debuted each year. "I coordinate the teams, liaise with suppliers and choose fabrics. Then, of course, I do fittings with Karl. As soon as I receive his sketches, the process begins. I try to please him, but I like to surprise him too," she explained. Lagerfeld did not attend Chanel's Spring 2019 Couture show in January due to his weakened health. Viard, tasked with representing Lagerfeld, then took the final bow upon the show's conclusion.