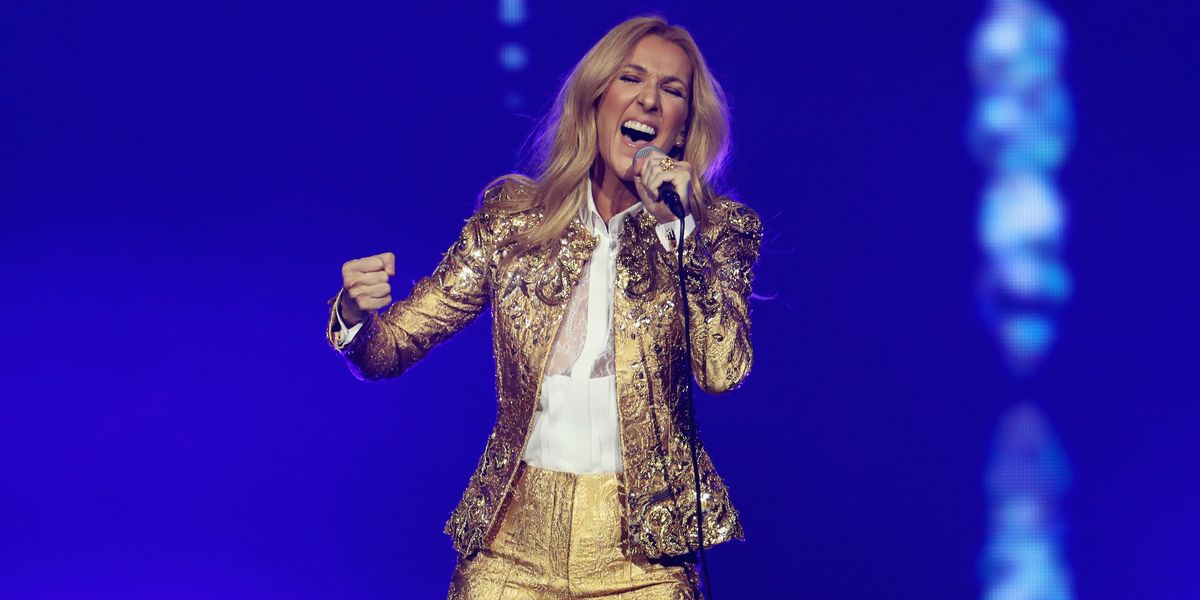 Celine Dion has made her mark as a true style icon over the past few years, recruiting stylist Law Roach who took her larger-than-life image and refined it — just to the intersection point between eye-catching and elegant — right before a look goes too far over the top. This past weekend, Dion kicked off her tour in Sydney Australia wearing a golden suit that we can't stop looking away from. The suit was designed by Schiaparelli Couture, featuring high-waisted gold brocade pants and matching structured shoulder blazer with a classic white tuxedo shirt underneath that boasted two panels of sheer lace on her chest. On her feet were a pair of metallic pointed-toe booties with stiletto heels.

It was Dion's first time performing in Australia in more than a decade, which means that it was also the first time she had been seen there with her new high-fashion look. It's safe to say that she knocked it out of the park—and then a little further. Dion has tried out nearly every silhouette to-date, perfectly walking the line between refined and other-worldly. From her white gown with gigantic sculptural sleeves from Stéphane Rolland for her performance at this spring's BBMAs to her über casual Titanic hoodie and jeans for a daytime stroll (because, why not?), she's a true force to be reckoned with, especially when it comes to her fashion iconship.

This is not the first time Dion has opted for bright suiting, as another one of her much-discussed looks as of late was a canary yellow boxy-cut style from Ribah Kayrouz which she struck a pose in while in Bangkok, wrapping up the Asia-Pacific leg of her tour just a few days ago. Here's hoping Dion's next few appearances feature bright suiting…heavily.