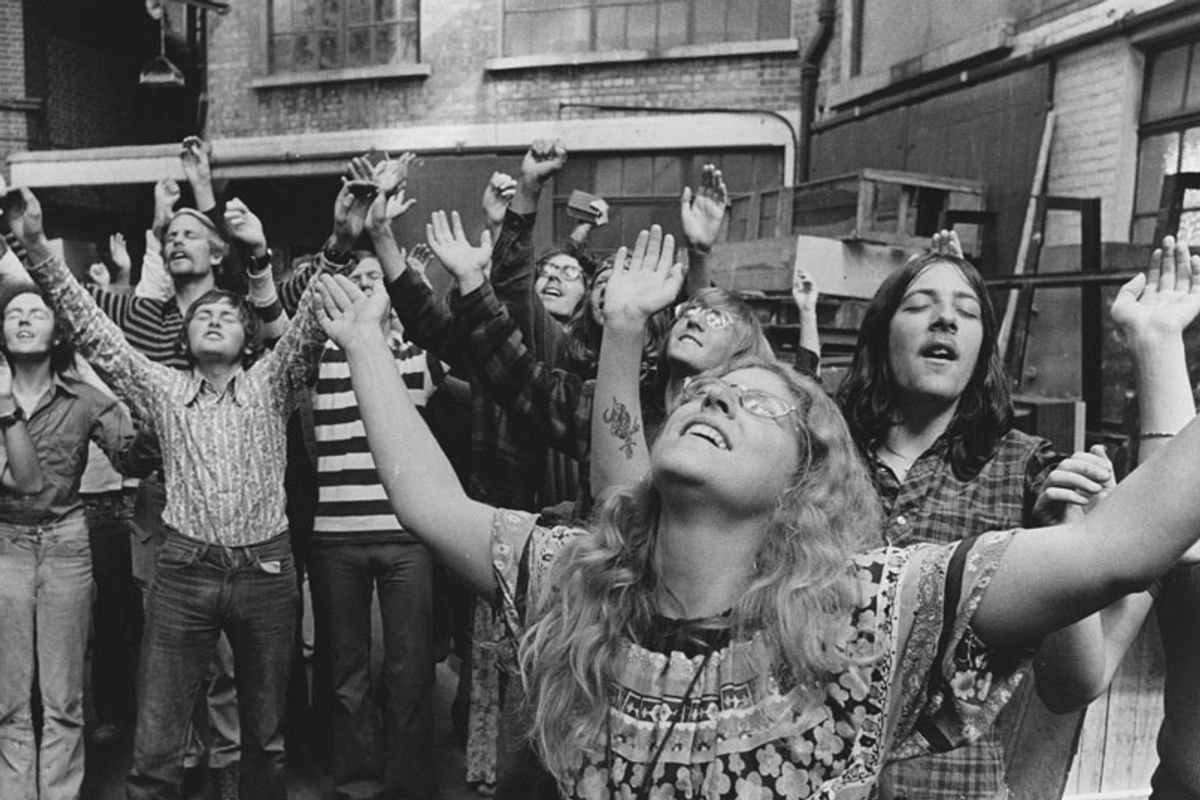 7 Celebrities Who Dabbled In Cults, Communes, And Extremist Religious Sects But Turned Out Pretty Swell

It's 'Gossip Week' on papermag.com - check back in each day as we tackle the wild world of celebrity rumors, crisis management, and true tall tales about your favorite famous people. Yesterday we looked at the 9 biggest celebrity rumors that just won't die and today we turn our attention to true stories of famous people who were once members of cults...but managed to get out alright.


When thinking of "celebrity" and "cult," the most prevalent gut reaction is to think of Scientology (I see you, Leah Remini!) despite the church's unwavering stance that they are indeed a religion (their tax exemptions would have to agree).


But there are still a host of famous folk who've either willingly joined -- or were born into -- cults, and countless others who were once part of communes or religious sects with enough repressive beliefs and, in some cases, Messianic leaders, that they very nearly fit the accepted definition of a cult.

Here are a few of the stars (that we know of) who've dabbled in them, and made it out OK.

The ice-eyed screen legend arrived in Los Angeles as a young aspiring actor, and became attached to a couple who were teachers of " Breatharianism." In case you don't know, Breatharians are convinced that like plants, human can achieve photosynthesis, and achieve any/all nutrients solely from sunlight, without food or water. K!

The 'practice' has resulted in multiple deaths over the years, and are currently under the guidance of leader named Jasmuheen, who is a self-proclaimed "Ambassador of Peace, International lecturer, author and leading researcher into pranic living."

In an interview with the Telegraph years back, Pfeiffer said, "I had to pay for all the time I was there, so it was financially very draining. They believed that people in their highest state were breatharian."


Pfeiffer and the other impressionable minds this couple instructed lived in strict ordinance with this insane lifestyle, and it was only until Michelle was helping her first husband, Peter Horton, prepare for a role in a movie about Reverend Sun Myung Moon's cult, did the actress realize that she, herself, was involved with one. She promptly got the f*ck out and never looked back.

Born to a prominent family, the Hollywood icon's physician father had her family join a religious faction called the Moral Re-Armament (MRA), founded by religious evangelist, Frank Buchman. The order's lavish headquarters were at a hotel in Switzerland, where Close and her siblings lived for years. The puritanical sect restricted any free-thinking, and "unnatural desires" were reviled. After her father, who was the personal doctor for Congolese dictator Mobuto Sese Seko (holy shit), went missing for an entire year after a revolution within the African nation in the 1960s, she and her family returned to Connecticut.


It took an epiphany while attending William and Mary college for Close to realize how dangerous this religion was, and she quickly left. Despite the psychological trauma, Glenn believes having to "pretend" to agree with the cult's oppressive beliefs gave her a natural ability to act.

When the doe-eyed '90s It Girl was seven, her family relocated to the "Rainbow Family Commune of Living," which was a large farm in Mendocino, California. There, the family lived with seven other families without any electricity, television, or music.


Due to the external repression, Ryder escaped into literature, and developed an interest in acting after her mother secretly showed her siblings movies projected onto a screen on their farm's barn (that is some Martha Marcy May Marlene shit).

The Rainbow Family still convenes each year in Utah, and has gone on to have a pretty sinister-sounding reputation.

David, Roseanna, Patricia, Alexis, and Richmond Arquette lived with their parents on Skymont Subud -- a spiritual commune in Virginia that followed the still practiced order of Sudub, an organization founded by Indonesian prophet Muhhamad Subud Sumohadiwidjojo. The community lived without electricity, running water, or bathrooms, and was fully supported by members holding job's outside the confines.


Mardi Arquette, the family's matriarch, taught acting classes that her children attended until the family left the community in the late 70s; Skymont has since been abandoned.

The renegade thesp, along with his late brother River and their other siblings, were raised by his parents in the Children of God cult, originally founded by David Berg, in Puerto Rico, then moved around South America.


His parents soon became disillusioned by the cult's dangerous practices, which allegedly involved child molestation, changed their last name from "Bottom" to "Phoenix," and broke away back to the US in the late '70s. Before getting their children into acting, the Phoenix parents made their kids perform on the streets for money (fun!).

Another former Child of God member, the outspoken actress was born in Italy, where her father ran the religion's chapter, and moved with her family around Europe to the order's various compounds. McGowan maintains that she never experienced any of the abuse alleged by so many former members of the oppressive organization; her parents left the group in 1978, and moved the family to Oregon.

The revered indie musician was also born into Children of God in the late '70s, and traveled with his family around Europe and Asia.


In an interview with the Guardian, Owens said, "Imagine being raised in the Taliban. Being told everybody else in the world is bad, rejecting technology, rejecting medical research, being devoted to God and believing America was evil and the end of the world was coming: all the same principles."

The rocker escaped to Texas where his sister and boyfriend lived, who had left the church years before; it was there that he discovered music, which had been deprived from him his entire life.

The fierce, openly bisexual, and gender-neutral MC was raised in the Greater Apostolic Faith, a pentecostal Christian sect in Michigan.

After a minister in the order threatened Haze's mother, the family disaffected, and moved to Brooklyn, where the rapper first became introduced to the underground music scene. The lingering affects of the repression she endured is often explored in her music.