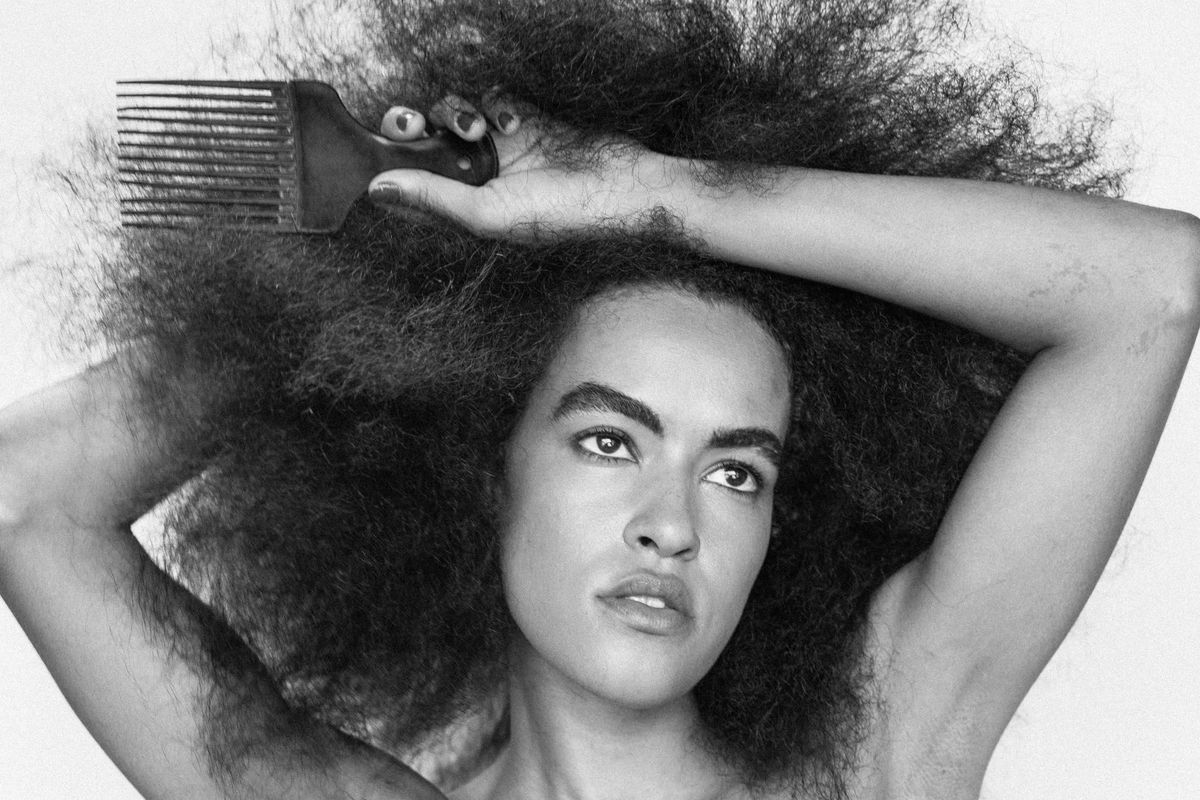 It's hard to find moments of joy in the fight for social justice.

Since the murder of George Floyd in May, thousands of Americans protesting racial injustice in support of the Black Lives Matter movement have been met with drastic violence from police officers aiming to whittle down crowd sizes. These demonstrators have been portrayed as lawless rioters and looters, but the reality is that a majority come in peace as they demand immediate anti-racist legislation, plus an end to police brutality and even police altogether. In fact, some activists are relying on messages of love and joy to get their point across.

Casey Malone is a 27-year-old Los Angeles-based artist who recently went viral for the enchanting and healing way she's chosen to participate in Black Lives Matter demonstrations. A self described "Jack of all arts," the singer, songwriter, model, and comedian had me laughing earlier this month when I discovered a video of her colorfully singing "no justice, no peace!" — one of the more popular protest chants — on Instagram.

In it, Malone and a group of Angeleno activists break from the justifiably somber tone most demonstrators adopt to instead deliver those four words in a reggae-like fashion that'll make you want to sing, dance and perhaps find something to celebrate. It now has over 100,000 views. "I be making people laugh!" she tells me over the phone, laughing.

Malone may carry herself like a seasoned activist, but when we speak she's only attended three protests in Los Angeles so far. As a Black woman, she says she felt compelled to hit the streets and have her voice heard in the wake of Floyd's death. "What happened to George Floyd was terrible. All of the uproar, anger, unjustness — it hit everyone. Even with coronavirus, there was no choice but to go out. I grew up in church, so it's like, use your gifts wherever they're needed, you know?" she says.

By sharing several clips of herself protesting, Malone has earned 14,000 new Instagram followers in just over a month — and new work has come her way. Just last week, she signed with Freedom Models L.A., and has had conversations with another modeling agency. With Ubiquity Records, she's also gearing up to release a new single, "Hey Amerika," which speaks to the Black experience in the U.S. A jazz singer who cites Ella Fitzgerald, Billie Holiday, Frank Sinatra, and Amy Winehouse as inspiration, her electrifying and soothing vocals are also sprinkled throughout her feed.

PAPER caught up with Malone to discuss her artistry, the story behind her viral protest clips and her approach to joining the movement. As she proves, sometimes a little levity is what's needed in order to make the demands of marginalized communities louder.

You first hit the streets at the end of May, chanting "Say His Name!" What inspired you to do so?

My friend hit me up and said there's a protest in Hollywood, do you want to come? I was like, "Yaas!". I thought, I gotta go sing. I'm a jazz singer. "Strange Fruit" [by Nina Simone] is close to my heart and I've been singing these songs about Black freedom and injustice. I thought, I'm just gonna go out there and sing to the government, really. I call it the Battle on Fairfax and Third 'cause that shit was crazy. That was my first protest, actually.

There's so much energy in that first video. What was going on around you — and what do we see you pushing?

I brought my little cart, Bose speakers, a mic cord and the mic. I'm actually so hype in that moment because all of us were running away from police fire. We had just turned and ran for our lives. Someone looked at me and they were like, 'Leave the cart! Leave the cart!' I was like, "No!"

That's ballsy! I would have run.

I didn't know how dangerous it was going to be. Everything was very mysterious at this time. Now we can protest and I don't fear going out. But we left that protest and my friend whose white was like, "Is it white privilege that I don't want to get tear-gassed?" I was like, "No, babe! Let's go. I don't want to get tear-gassed either." That's not everyone's calling. There was a lot of fear and police brutality going on, and it was really scary. All my friends I saw got hurt.

So how exactly did this footage of you go viral?

Stevie Mackey, J.Lo's vocal coach, actually posted that original cart video of me from a different angle and it went viral. And he kind of was making fun of me, like, low-key making fun-of vibes. And then Amber Riley commented on the video and threw all this shade and hate at me. [Riley wrote, "This was part of the problem yesterday. Dear white people, if you're gonna protest with us (and I say WITH because it's OUR movement) FOLLOW THE FUCKING LEADER!!! Do not show up your own agenda.] I've never been trolled before. I wasn't trying to get attention or anything. I was just going out there fighting the man.

I felt very hurt as a mixed Black woman who wasn't raised with a Black father because I felt like I had no right to speak on Black matters because I'm too light-skinned. I never felt that before. It very much made me question my place in the protests at first. People in the comments called me KKK Beyonce, Mayonnaise Beyonce. However, I did not let it stop me and I continued to protest. Seeing positive comments made me get back out there.

I'm glad you did. The video you shared from your second protest, in which you sing, "no justice, no peace!," has received over 100,000 views. And it's so funny, but powerful.

Someone DM'd me and said, "A few weeks ago you were singing next to me and it changed me forever. You're important. Thank you." I have been receiving a lot of these types of messages. It's really cool that me being my full self is so welcomed and appreciated. I had around 2,700 followers and now I have like 16.8K. Bella Hadid posted one of my folk songs on her story. Things have totally been changing.

You wrote in that caption that you were afraid to march with your fro. Why is that?

I grew up in Orange County, which is super suburbia. I personally haven't faced much police brutality. But seeing violence on Instagram made me realize I'm a target, my afro is a target. I'm Black, and they know I'm part of the resistance because I'm not gonna be on their side. I was scared to go to that protest and almost didn't go. I thought, I don't want to be trolled or made fun of again, but I do feel like I have a voice because I'm Black and I care about this shit.

The reason I'm so hype in that video is because people were like, "Oh my God! I saw your video from Stevie Mackey's post!" People were like, "Woo! Woo! Woo!" The guy next to me was yelling, "Say his name!" mimicking my other video. I was like, "Yass! These are my people. People are for this." I jammed. This is a way that we can protest that is bringing peace and light into a movement so full of fear.

Your political freestyling is also hilarious, and you gave us a taste at your third protest. I loved when you said, "We aren't like the people of the past, no, because we like ass."

Freestyling is a huge strength of mine, and that video is like an accumulation of all of the knowledge that I've been absorbing since these protests have been going on. I try to bring light into my chants. Rather than say, "Fuck the police!" or "Black lives matter!" I try to be extra positive, like "Black lives are awesome!," "We more than matter!," "We are stronger together!" and "Together we can!"

Let's talk about your looks. To honor Pride at that last protest, you wore a bathing suit and fruit hat. How do you decide what to wear for these?

For the first protest, I thought, "What does freedom look like to me? How do I want to look?" Freedom looks like red boots, a leather skirt, and a bathing suit top. That's my power outfit. The fruit hat is my boyfriend's; he's the one beat-boxing. I want to be unashamed in celebration. For the Black Lives Matter movement, people are wearing black and white, and shorts. To me, that doesn't say revolution, that doesn't say freedom. To me, freedom is being your biggest self, grabbing whatever fruit there is, being that big, full person you were meant to be, filling up the space and giving your life. I never try to fit in. I don't wear jeans. It doesn't make sense to be uniform when we're fighting against uniformity. If you look at protests from the past, people are dressed in their best. People look fantastic. And it says something when you're not afraid to be loud.

I feel incredible. I feel so proud to be a part of this generation that is choosing to look at a wound 400-plus years deep and do something about it. We're not sitting back. My life as a Black woman has gotten way better in the past three weeks, just in the acknowledgement of my music, my art, my everything. All of my Black friends around me have benefitted so much. One of the dancers in my videos said he was on the bus and an old white woman offered her seat. He was like, 'I almost started crying.' I can't believe how much shitty treatment we were getting before. I definitely see a change. I see Black people being way more respected already and I think that's definitely going to continue.

So can we expect to see you at more protests?

Absolutely. I go at least once a week, whenever I can get out there. It's really important. I'm also protesting from home and memorizing more political songs and poems to share on Instagram — I've realized now how huge a platform it is. My friends in New York are doing it every day and I feel like such a debutante. Up next I'm hosting "Frofest Protest," a historical trip through Black music, as a Fourth of July alternative in Boyle Heights. I'll be promoting it on my page!