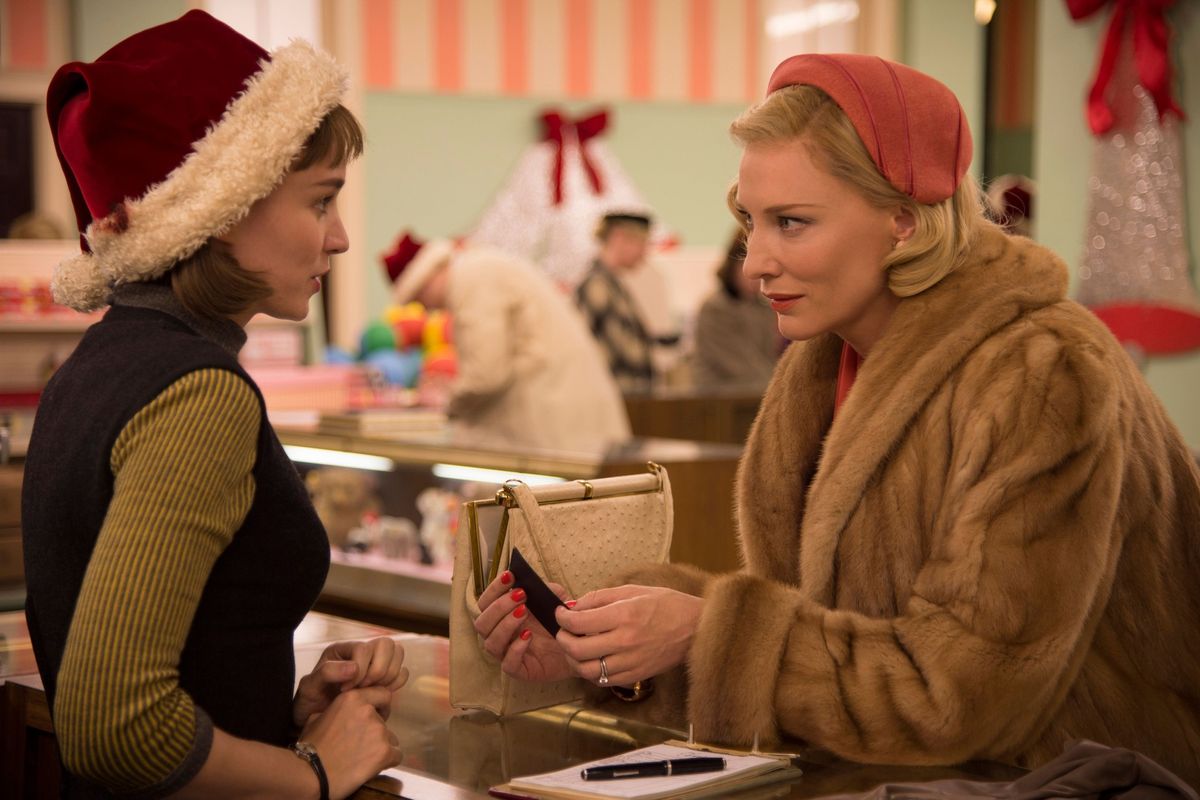 With the release of the 2016 Oscar nominations this morning, Internet backlash ignited almost immediately; another twist of the knife in an already heinous week of pop culture.

With righteous criticisms of the audacious lack of color within the acting categories (and basically everything else); Eddie Redmayne, a white straight man, was nominated for playing a trans woman in The Danish Girl, while Oscar hopeful Mya Taylor (Tangerine) who IS actually a trans woman (of color, no less), was ignored for Best Supporting Actress.

Another source of outrage (it's all about outrage this week, y'all) lies in the Academy snubbing Todd Haynes' lesbian-themed drama Carol, starring Cate Blanchett and Rooney Mara, for a Best Picture nomination.

Both Blanchett and Mara were nominated for Best Actress and Best Supporting Actress, respectively (although, one can absolutely say Rooney's tour de force portrayal of Therese Belivet deserves a Best Actress spot, alongside her phenomenal costar).

The two decide to risk it all (Carol, custody of her daughter with Harge; Therese, her job and social standings) embark on a clandestine road trip, which, if you haven't seen it, doesn't end too, too well.

Regardless of the painful sacrifices the two women make to live their authentic selves, and be together, they make them, and in the end -- though more ambiguous than clear-cut -- it appears Carol and Therese will live a happy life together.

Here are two financially independent women, who fearlessly (and quite literally) give up everything to live their truth, and live together; it's remarkable, considering the grand tradition of LGBT-centric movies ending in melodramatic tragedy.

As Vanity Fair writer Richard Lawson points out, Carol is not melodramatic.

It's a complex, bittersweet story of two humans (who happen to be women) finding refuge and sameness in one another -- the sameness that alienates them from the repressed world they're apart of.

It seems that gay romances are only Oscar surefires when they use the following equation: tragedy + time + secret+ desolation + more time + demise.

Brokeback Mountain was nominated for Best Picture in 2005; its depiction of two star-crossed Wyoming ranchers with a doomed, decades-long (and secret) relationship that ends as violently sad for viewers as the violence that physically destroys their earthly bond.

It's entertaining, in the most ghoulish sense.

But most of all, there's inherent condescension from the mainstream world, compelled by a story like Brokeback; they can leave the theater thinking, 'How sad for them! How sad for gay people," and go home to their ostensibly not-sad, not-tragic life.

In some way, the LGBT experience, to many Americans, is still perceived to be one forged in oppression, depression, disappointment, and brutality -- despite all the "advancements," and inclusion in the heteronormative mainstream (yay, gay marriage!).

So when a gay romantic relationship is depicted on the screen, it's only natural that people -- including, apparently, the Academy -- can only make sense of it if it ends in misery.

Meanwhile, a movie like Carol defies those expectations, especially since it's female driven; an unconventionally made film about two strong women who understand themselves, their bodies, their minds -- with self-ownership of all three.

That self assurance and sheer will to survive with their truth intact seems to be threatening to those 'in charge' of what is considered excellent in entertainment.

The fact that a depiction of two strong women in love with each other, no less,and who end up being pretty OK with the OK-ness of their functioning, romantic, lesbian relationship, seems to still be troubling to many? I find that more troubling.