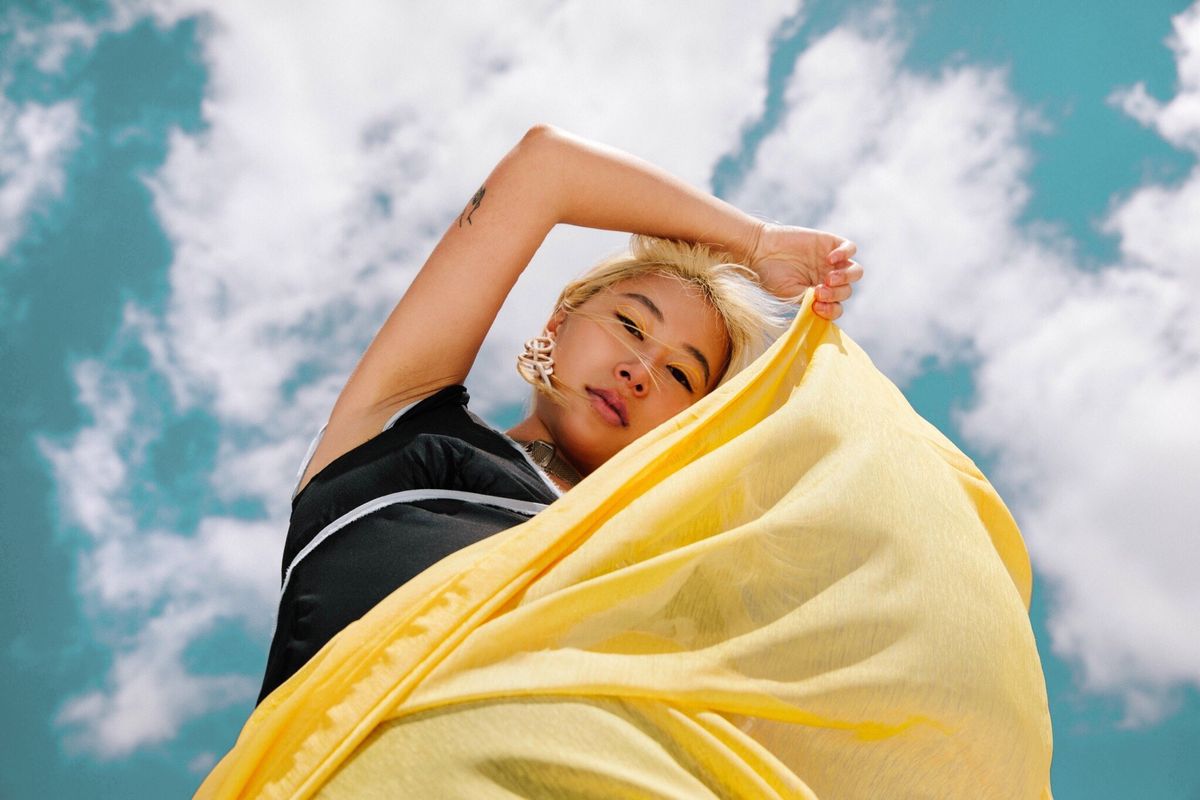 Caro Juna wants to write a love letter to all the Asian women around her with the short but sweet bouquet of a debut EP that is Flower Language. The Brooklyn-based independent artist who was born in Korea, raised in Japan, and moved to the US when she was in high school has always loved love songs. And while she might not necessarily be in love with one particular person right now, she wants to let her community know how beautiful and loved they are through the sweet sound of her jazz-inspired, lyrical R&B.

"Flower Language comes from the Japanese term hanakotoba, which is sort of like the Japanese art of assigning meaning to flowers," Caro explains to PAPER. "The reason I wanted to title it that way was that while I was writing the songs, I was thinking a lot about the amazing Asian women that surround me. And in my mind, I sort of envision them all as flowers that have their own layers and meanings and stories, and the different ways that we decorate the world."

PAPER spoke with Caro about her classical music background, Asian representation in music beyond K-Pop, and the most challenging parts of being a new voice in the industry.

How did you get into music?

I grew up playing violin, piano, and singing. I actually studied jazz and opera! I'm very classically trained. I think a lot of Asians study music, but I think something about it really... I love classical music. I really wanted to do classical piano. I considered it as a career, but I think that I listen to so many genres I feel like right now in modern music I wanted to experiment with pushing the envelope a little bit and see how I can incorporate not only the old, but also the new. My love for jazz and classical music happens to be very relevant right now, because I think a lot of jazz-inspired pop music is blowing up right now. I don't see a lot of Asian women doing it, so I wanted to try my hand at it.

What have been the challenges since pursuing your music career?

I'm also a data scientist by day, and I've been very blessed that I have a career that I love by day. Monetarily, I haven't struggled, but it's been a big struggle internally. I don't feel like I've fully fleshed-out my identity issues, or whether I want to include other languages in my music, and who I am and what I want. I think there's a lot of pressure to carry the burden of the Asian-American identity on myself, even though I don't have to feel that way. Because there's not much representation, every little action means that much more. I feel like it's so much easier to scrutinize something when people haven't seen it before versus something else that's been overdone. So it's been a lot of identity struggle, but I've also been really really blessed because I have so many friends who have been doing it and have been successful in music, and been very encouraging and willing to listen to me when I get anxiety about it.

A lot of people are now open to talk about the Asian-American diaspora — a lot of the discussion around it is kind of sad and depressing. But this EP is more joyful and celebratory.

Yeah! Definitely more joyful. I think there's a lot of anger. Understandably, there's a lot of anger, and I feel like that's because as my friend says, we're being erased from memory almost just because there's such a lack of representation. And I think right now is such a great time to be an Asian in media because there's so much going on currently. I just wanted to say something beautiful, and show that there is a beautiful side to it rather than just the anger.

"Because there's not much representation, every little action means that much more."

What do you think is the importance of having more Asian artists heard today?

When I think about Asian representation in music right now, obviously there's 88rising. And then there are two female artists under 88rising. But to think that everyone can just refer to that one label as being an all-Asian label is really sad to me because there's such a spectrum of artists and genres, and people trying to do different things. I feel like people can only refer to one thing right now as having become popularized. And so I think it's sort of our moral imperative to do what we can to increase representation.

There can also be the mistaken mainstream assumption that all Asian music is K-Pop.

Obviously, it's amazing that BTS is blowing up, and also as a Korean I feel so proud because of K-Pop representation. I love K-Pop and I think that there's so much great art coming out of it, but then there are so many K-Pop musicians. [A lot of the girls in these groups have similar features — light skin and perfect complexion, skinny with long legs.] And I think having grown up in Asia, I noticed a lot of pressure from Asia wanting to feel whiter. People value if you speak English, for example. The whiter your skin is, the more beautiful you're considered. And there are all these little things that have been ingrained in Asian culture from all of the Western influence, and that's really sad. It'd be nice to see different faces coming to light, and being considered beautiful and successful.

What have been the best things that have happened since you embarked on this musical journey?

Honestly, it's been the people that I met. I feel like I've met a lot of other Asian-American artists through this that I never thought I would even get a chance to. I didn't even know there were so many out there. I always feel like I have this huge support system, and a commune of people that not only I believe in them, but they also believe in me. That's been really exciting.

I feel like I'm getting better at my music! I was always into poetry, and I started to put together a book of poetry, and then as I transitioned into music more because that's sort of where my foundation lies, I realized that it was kind of amazing how I could combine my love for writing and reading with my love for music, just because those two felt so different and separate for a long time. I feel more free in my expression now more than I've ever felt before. It's very liberating.

Listen to the full Flower Language EP below.