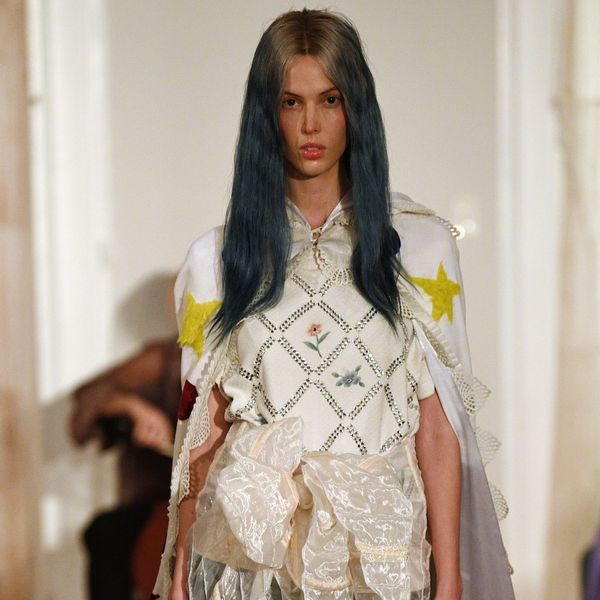 The Story Behind the Coolest Debut at New York Fashion Week

Back in 2016, FIT-trained designer Ayla Argentina lost a job as a freelancer in Victoria's Secret cotton bra and panties division. They had hated the work; the endless meetings, the designs pulled from Pinterest, sitting in front of a screen for eight hours a day. "In terms of design, I was gritting through my teeth," they said. "I was so heartbroken and so upset all the time. Like, why did I get a degree and go into debt for this?" It feels notable that their Instagram handle is now @pantyboner.

But still: losing the job and source of income was terrifying. Argentina's friend was working with the artist Carly Mark at the time, and so they headed to Mark's Brooklyn studio ("showed up crying," as Mark put it). Mark was preparing for her first solo show, at the Breeder Gallery in Athens, and Argentina began working with her on costume pieces, enormous sculptures with names like "Gold Bear" (after the Haribo gummies mascot) and "Fat-Shaming Birthday Cake." They made medieval gowns and cloaks for Mark's short horror film, Know Nothing.

Last summer, Mark was hired to create two covers for King Kong magazine: one featuring the virtual model Lil Miquela and another for the French musician Charlotte Gainsbourg, offspring of Jane Birkin and Serge (who famously sang a song with his daughter about "lemon incest"). Argentina sewed several custom pieces; Mark went to Los Angeles to produce the shoot, sourcing venues and a photographer and special items from Paris. And then Gainsbourg canceled with two days notice.

They didn't want to waste the work. "That was the jumping off point for the rest of this," said Argentina. "In September fashion week happened again, and we were like fuck it, let's just keep going until we have a full collection."

The result is Puppets and Puppets, a brand that toggles between streetwear (logo t-shirts and sweatshirts), pointy-eared medieval fantasy, and '70s-inflected shagginess. Mark creative directs and handles production, social media, and press; Argentina sews it all by hand. They christened the line after Mark's chihuahua mix, Puppet. And as she noted, Puppet is a loaded word, one that makes sense for fashion. Models are treated like puppets, those who obsessively follow trends behave like puppets. And you do put your hands inside them.

The Puppets and Puppets show was held at a glamorous West Village townhouse with chandeliers and the cellist Patrick Belaga, who eventually busted out the Game of Thrones theme song. The runway (Ruby Aldridge, Jane Moseley, Lili Sumner, Richie Shazam) and guest list (Chloe Wise, Paloma Elsesser, Ali Michael) were both full of shiny New York people, friends of Mark. The show was styled by the venerable Stella Greenspan. It was on the whole a smoother production than most of Puppets' downtown, DIY peers, and all a bit Courtney Love — who lives in her own townhouse nearby, with a house manager and a special room for Tibetan chanting.

It was received very well, which obviously everybody wants every time they do anything creative in public, but felt especially necessary in this case. Puppets and Puppets was partially born of Mark's dissatisfaction with the art world, in which she had been working for years — "swimming against a current. It felt like Sisyphus."

Mark had been pushing boulders up hills for a long time. Her work, which includes sculpture and video and painting, deals with the inherent creepiness of (forgive me) late capitalism and advertising, showing commercials as horror films. She got a lot of attention in particular for a video in which Eric Wareheim, dressed as the Haribo bear, plays around with a butt plug.

There was a lot of, in Mark's words, "cultural capital." Reporters (like, uh, me) interviewed her about her work. Fans approached her in public. A lot of photographers took her picture. She developed a big Instagram following. But even coupled with deserved critical praise, none of this translated into gallery representation or financial success.

"I was putting in so much time, money, energy, effort into [art]," said Mark. "But I wasn't represented by a gallery, and I wasn't selling. And right before we moved studios this summer, from our place in Brooklyn, I looked around and I had five seven to nine-foot sculptures, and I thought, oh man, where am I gonna put these. And it was a little heartbreaking!"

"In fine art you have to think about what context you want to be in, because each gallery means something different," said Mark. "Each gallery is a different conversation, and engages with your work in a different way. So you have to think about what you want as an artist, and then wait for those people to approach. And some people put on their own shows and things, but does the work sell? Not really. Are you in conversation with the artists you want to be in conversation with? Not really. And I wasn't really willing to take that risk."

"But I was more than happy to go rogue in the fashion world, one because that's so exciting in New York right now, and that does not make or break where you end up being stocked. You put on the show, and the retailers approach you."

After years of struggling for recognition, fashion feels like the right place for Mark to be. "We knocked on fashion's door," she said. "And fashion opened up and said, 'what took you so long?'"