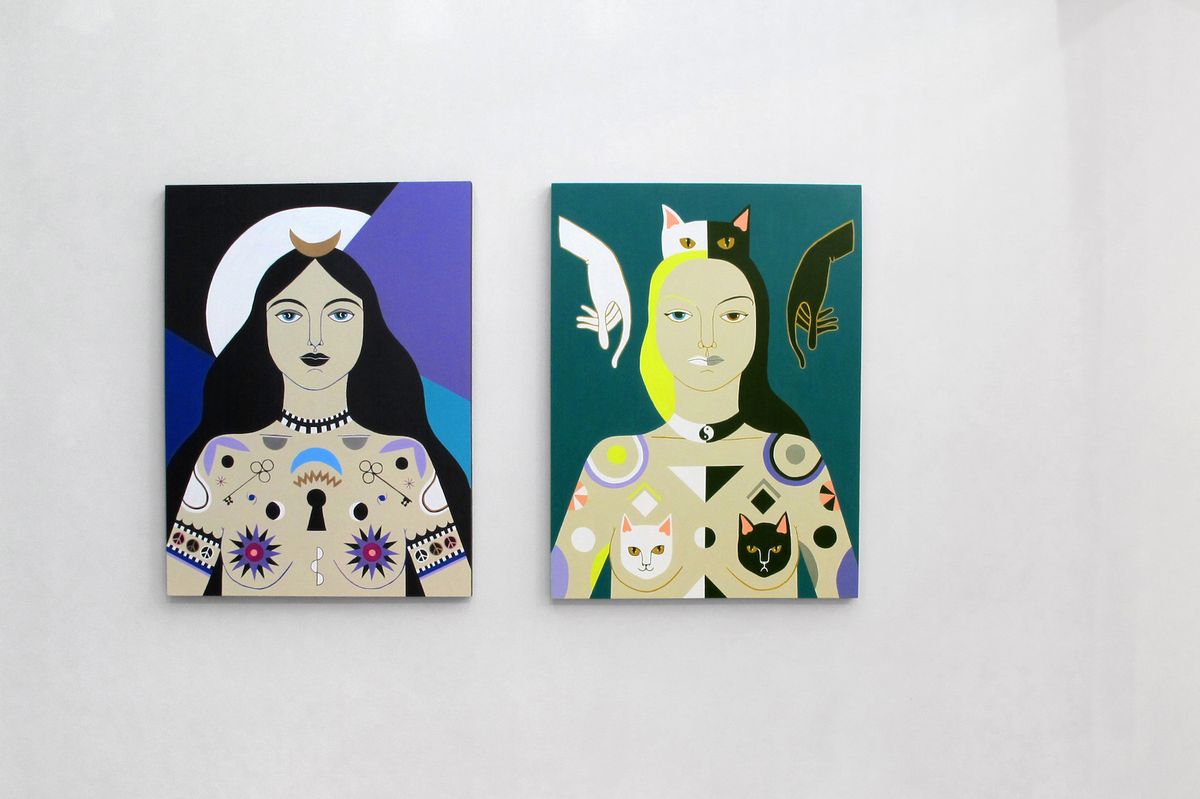 Tonight is a new moon, and we're all in it together. Throughout history, across cultures and time, the beginning of the lunar cycle is a symbol of new beginnings -- when tides change, when farmers plant crops, when women believed they had less of a risk to get pregnant. And now, at a small gallery in the Lower East Side, the new moon was not only the perfect time to open Amanda Valdez and Caris Reid's lunar inspired art show, it was set in the stars.

Valdez and Reid had known of each other for a while -- both Brooklyn-based artists wrote for Dossier magazine -- but it wasn't until 2014 that the duo truly connected during an interview for Women Artists magazine. The duo were similarly drawn to the ideas of ancient tradition, symbolism, mysticism and gender, and both found a practice in translating this interest into research and in turn, into very separate art forms. Valdez, who works mostly with textiles and fabrics, tells a story of history and the body in an abstract form, weaving colors and textures together on canvas. Reid approaches similar topics with a more figurative eye, painting bold, vibrant portraiture through a mystic lens, characters and symbols resembling something you might see on a new age tarot card.

The two artists have collaborated before, but after a series of conversations and research sessions about their interest in the moon and its effect on the body and spirit throughout history, they decided to bring their separate but connected works together for a moon-inspired show that would happen in two phases along with the moon. Time & Tide at Denny Gallery will not only open on the new moon, but on April 23rd, the day of the full moon, the artists will rehang new works to reflect this new phase. "The new moon is when things start," explains Reid. "The full moon is a period of completion and of destruction."

From initiation to completion, Time & Tide personifies both artists' connection to the symbolism of the moon, and gives us a reason to look up, dig deep and truly indulge in that monthly cycle.

How conscious was your decision to open the show on the new moon and rehang it a couple weeks later on the full moon?

Caris Reid: We had a few dates picked out but when we realized it would be on the new moon, we were all for it. In researching and paying attention to the rhythm of the moon, you see that there are certain times that things should be initiated, certain times of pause and completion. This just worked.

Amanda Valdez: The idea to do the second phase came much later. We had to shift things into high gear. It was perfect timing for a full moon, things transitioning and phasing, why not extend that to the exhibition and not just keep it locked into the paintings. It's this universal thing. All humans through all periods of time have looked up and felt something. No matter how vast and intricate your knowledge is of the moon there is something so sense-based in that. Our work is sensual, it has a physicality to it, so the moon is a conduit for that clarity and boldness.

Do you follow astrology? Does that affect the work or process.

Reid: I glean. It doesn't dictate my actions but it's interesting. I see it as a beautiful system of archetypes. I both believe all of it and none of it. It's a beautiful and fascinating construct, and even if you don't believe you can still look at it as metaphor.

Valdez: I think of all the 12 signs as vessels, and you can fill those vessels with ideas... I'm a pretty thorough Gemini. I have that complete ability to be on my own and focused, I can go days without talking to people. But then I have this other side, this extroverted, 'let's collaborate, let's party' attitude. It helps in collaborating.

Reid: It's true. She's an air sign, and I'm an Aries, a fire sign. Aries tend to be very independent and initiate things, and what's nice about fire and air is that when they come together correctly, they fuel each other. Air makes the fire bigger and directs it.

What is your process for collaborating?

Valdez: We start by reading together. Then getting together and talking about what interests us. Then we go separately to our studios. Then we cross over in each other's studios and start influencing each other's work. The work is still very much our own but we look to see how we can react. I'm very collaborative but my paintings are my paintings, I want that autonomy. But at the same time I don't want to be the lonely artist in my studio, I get energy from other people

Reid: Being an artist is such an independent venture. It attracts solo creatures. And it's nice to come together with our work. Our styles are very different but they work together.

Reid: It's the mandorla between us. The intersection spot between two circles.

In history and across cultures the moon is a symbol of fertility, womanhood and femininity. Do you feel that this work is particularly gendered?

Valdez: It's everywhere. And it's in a lot of the reading I was doing. It wasn't even that the moon was a symbol of fertility, of growth, it was growth and fertility. Seeds germinate at night. The farmers plant their crops with the moon.

Reid: In some cultures women would close the curtains during a full moon if they didn't want to become pregnant because they believed the light would make them more fertile.

Valdez: There's even a story about Mussolini being scared of the moonlight! He would sleep with the windows closed even in the summer because he was scared of the feminine energy. I love it, it's so witchy!

Reid: In this show there aren't any images of men necessarily but I don't see the female archetype, this moon symbol, as existing just in women. I see it as an energy, both present in men and women.

Do you feel that divide being female artists in a male dominated industry?

Reid: I think there is a sort of fear of the feminine in the art world by both men and women. Most of the things that inspire me tend to be more ephemeral, witchy or spiritual, things that are harder to qualify. But my aesthetic is actually very bold and confrontational. It's not a conscious decision but I wonder if I were doing the same work in a more sensitive vocabulary would it translate.

Valdez: One of the things we talked about when we first met and interviewed each other was our experience working in a male-dominated career and the frustrations. I think there is a camaraderie that gets built and a history of females coming together around that lack of access to exhibitions, institutions, collections and support. As an artist working with textiles and fabrics I'm very acutely aware of how men are able to work within this material and the context and language that is used around it. It can be extremely frustrating.

Like the act of weaving as a feminine art form as opposed to textiles being a masculine artform.

Reid: As a woman painting women, I feel that, too. I notice that male painters who paint women rarely get asked those harder questions about who is she, who does she represent.

Valdez: I think representing that diversity is really important. This gallery shows a lot of female artists and when Elizabeth was opening it we had a lot of conversations about that feminist stance. Feminism is about equality for everyone and men are just as limited by a patriarchal system.

At least the moon isn't gendered. It affects everyone.

Valdez: It's true. It's a conduit for time travel. It's a way to connect with the past. It's a signal in other people's art that I can connect to.

Reid: There is a universality that transcends time. The moon affects the tides, the coming in and the coming out. And we forget that our bodies are made primarily of water. If you think of what happens to the tides when the moon is full just imagine what that does to the human body. It's a real thing.

Valdez: It's totally connected. And there is something terrifying and at the same time completely comforting in that.

All photos courtesy of Denny Gallery