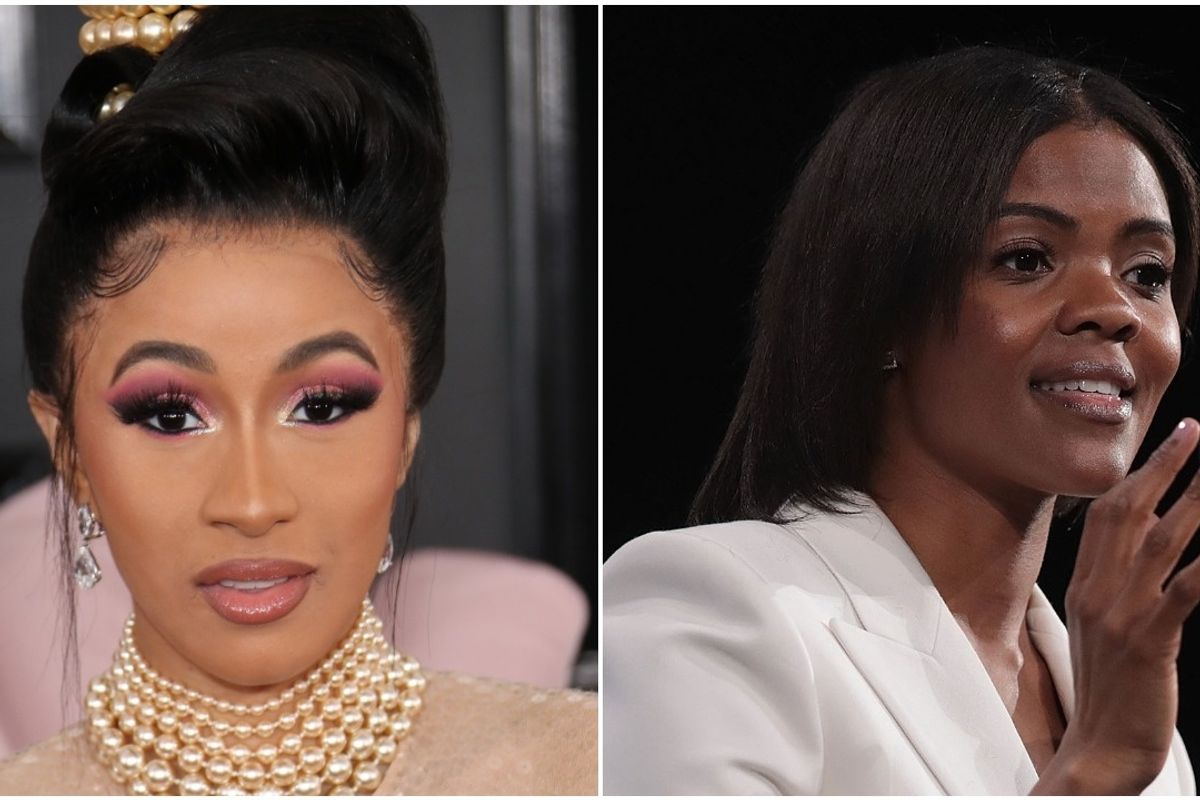 Cardi B is hitting back at conservative pundit Candace Owens, who called the rapper "dumb" and "illiterate" over her recent interview with Joe Biden.

Last month, Cardi sat down with Biden for a wide-ranging interview on everything from voter suppression to the coronavirus pandemic. However, according to Owens, having an "illiterate rapper" chat with the Democratic presidential candidate was, in her opinion, "one of the biggest insults" to Black voters.

"This would be akin to Donald Trump saying, 'I'm going to give no interviews, but he came up and he decided to give an interview to Justin Bieber…' it would be absurd," Owens told fellow conservative commentator Ben Shapiro this past weekend.

"You look at Cardi B's Instagram and she has millions of followers and you think, 'OK, this is an illiterate person and if I appeal to this illiterate person and she does "okurrr" like she literally did in the middle of this interview, they think she's cool, she's hip," she went on to say. "Just by sitting here and taking this interview, they will vote for me.' It's basically saying Black people, 'You are stupid, you are dumb and you're so foolish…'"

Since most black people didn’t have the spine to admit that @benshapiro was 100% correct about @iamcardib and how her music and platform contributes to the disintegration of black culture and values...here you go. #WAP #SundaySpecial pic.twitter.com/q5QxxX9G4e

Not only that, but Owens continued to hate on her last night via Instagram Live, alluding to Cardi being "uneducated" when it comes to politics when she said, "You continually keep saying you have a No. 1 song, it means shit. Nobody cares about a song about your wet ass pussy."

That said, the "WAP" rapper — who's no stranger when it comes to conservative hate — quickly responded to Owens's video with her own Instagram Live about the pundit's support of Trump, before reposting a clip of her attempting to justify the death of George Floyd.

"The type of people that drag me all day online all cause I hate Trump. This girl tho she makes me sad," Cardi wrote alongside the second video. "She have a identity issue. She hates her own kind."

@realcandaceowens here I hope these followers that you wanted from me sooo bad make you happy ...Now leave me alone....love yourself that one thing for me !

The type of people that drag me all day online all cause I hate trump.This girl tho she makes me sad.She have a identity issue.She hates her own kind.I never fucked a white men so idk how good white duck is to make turn against my own race but this girl is six months pregnant harrassing all cause of a song Called WAP and Trump .Well I hope I made your bay kick sweety

But Cardi didn't stop there. Shortly afterwards, she followed up by posting a screenshot of a tweet made by Owens in 2018, in which she called the artist a new leader for "the Black revolution for free thought."

"You been knew the power and potential that I have. I will never let ya silence my voice cause you threatened by the power that I have for a new beginning and change!" Cardi wrote in the caption. "People will call you dumb, stupid, but deep down inside they know you a fuckin' force."

Since 2018 you been knew the power and potential that I have.I will never let ya SILENCE MY VOICE cause you threatened by the power that I have for a NEW BEGINNING AND CHANGE ! People will call you dumb , stupid but deep down inside they know you a fuckin FORCE.

Additionally, she later responded to Owens's recent dismissal of an incident — in which Cardi's sister, Hennessy Carolina, was harassed by Trump supporters — by writing, "I have a huge platform and I can make millions go vote to get the MAN THAT USED YOU." She also went on to point out that Trump has continually overlooked Owens's support and did not invite her to speak at the Republican National Convention.

"I don't want to argue with you Candace I really don't have the time," Cardi wrote, before concluding, "I honestly just feel sorry for you."

See Cardi's most recent tweets, below.

Yes you are right I have the number 1 song & I have a huge platform and I can make millions go vote to get the MAN THAT USED YOU .I don’t want to argue with you Candace I really don’t have the time .I honestly just feel sorry for you. https://t.co/haACwKRN13

Right they use her ass and they don’t even have the decency to put her in the Republican convention.She have a huge platform have Trump sat with her?gave her a interview? That’s the least he could do ? NO ? Ooo ok https://t.co/zZbCabnIXV