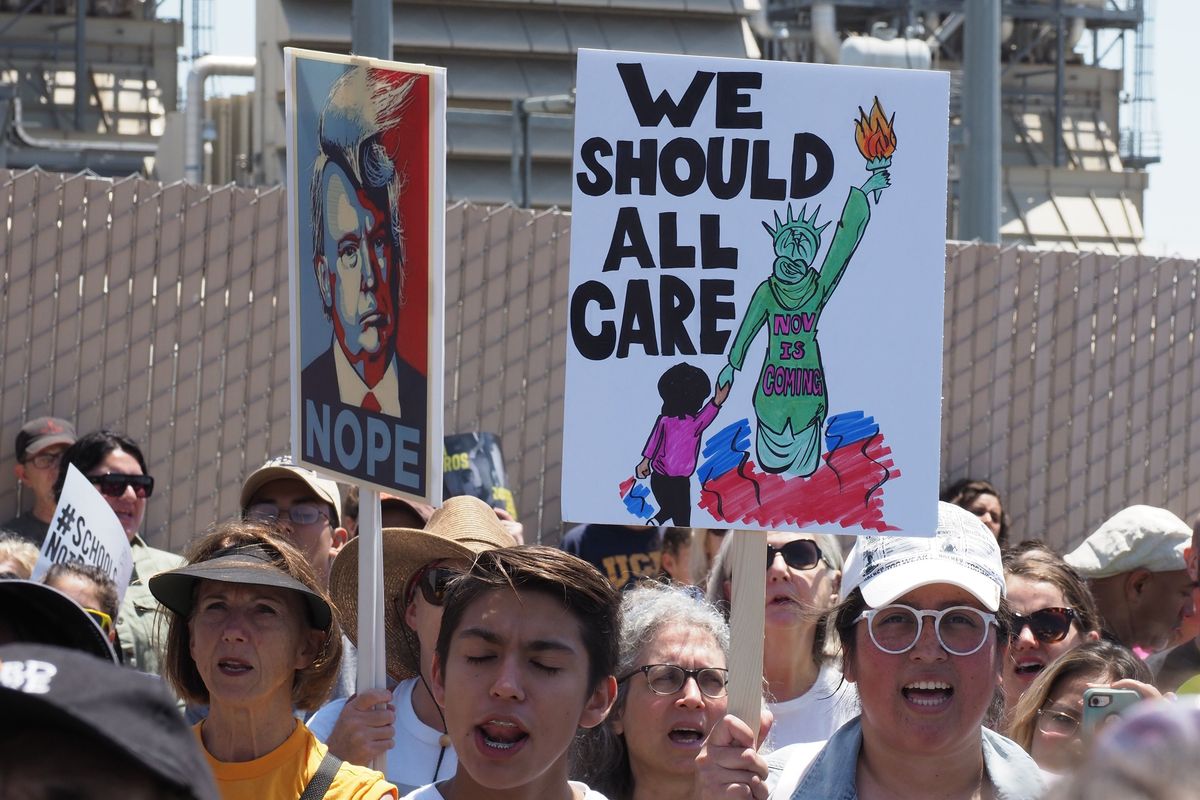 As an activist working with refugees, asylum-seekers, and immigrants in Texas, I'm heartened by the recent uptick of outrage against the separation of migrant families. In my day-to-day work, there's little reason to feel optimistic for migrant folks who are tremendously disadvantaged by a government and social rhetoric that works hard to articulate how little our country wants them here. This week, activist spirits have been buoyed by people who are up in arms against ICE's human rights abuses.

But I remain fearful for the people who have been left out of the current spotlight and outpouring of empathy—namely, the detained individuals who have migrated without families. As awareness of how ICE hurts migrant families grows, I hope we can expand our fight to rally against ICE detention of any immigrant.

Thousands of migrants undertake long, difficult journeys to the U.S. border every year attempting to exercise their right to plead asylum and seek refuge from violence and persecution in their home countries. However, seeking asylum, like immigration of all kinds, is becoming an increasingly criminalized activity.

Detaining asylum-seekers and immigrants has a long history in this country. The government started constructing immigration prisons in the 1980s in response to the arrival of Cuban and Haitian refugees, and the practice of imprisoning asylum-seekers proliferated towards the end of the decade, riding the momentum of the War on Drugs and the popular theory that incarceration could be a conceivable solution to social problems.

Today, more than 200 American prisons comprise the world's largest immigrant detention system. ICE detention centers incarcerate 350,000 immigrants annually. Despite waiting months, and sometimes years, inside detention centers for results of their legal proceedings, many migrants are deported right back into the violence from which they fled.

These prisons are in disparate, remote enclaves around the country, where holding cells, barbed wire, geographic distance from big cities, limited visitation hours, erratic translation services, and pay-by-minute phone accounts maintain a shield of discretion that enables their very existence. By obscuring the human rights abuses that regularly occur inside, ICE detention centers continue to flourish. In fact, private prison stocks are skyrocketing. Trump's promise to reunite the separated migrant families—by putting them together, in prison—offers a hot contract expansion to for-profit prison companies like GEO and CoreCivic.

"Trump's promise to reunite the separated migrant families—by putting them together, in prison—offers a hot contract expansion to for-profit prison companies."

Most detained immigrants do not have access to legal representation. The Trump administration is in the process of defunding the legal aide desks for immigrants, for whom language barriers, lack of legal representation, and unfamiliarity with asylum law already pose great challenges. Some detained immigrants undergo solitary confinement, ignored medical needs, lack of nourishment, and extremely limited "rec" time; Some speak of open-air toilets in the dormitories where 100 men sleep. Other talk of intimidation and sexual violence at the hands of the American guards.

This year, the Supreme Court reaffirmed the government's right to indefinitely incarcerate immigrants.

Part of my job involves corresponding with migrants held in ICE detention. In letters I read from detainees, I witness the profound psychological toll of an indefinite sentence; detainees become markedly distressed and increasingly hopeless as months go by in detention. One asylum-seeker whose request for parole was recently denied by a judge in Georgia wrote of his anguish; he told his judge that he would rather commit suicide than continue to suffer in ICE detention. The judge called security, saying, "This man is not normal," and the asylum-seeker cried back, "How could I be normal? You've locked me up for eight months, and there's no end in sight."

His request for liberation was denied because he has no family to offer "sponsorship" of his parole in the United States. He asked the judge, "What's my crime? Being in the United States with no family? My family was killed by the dictator back home—I've fled my country to avoid that same fate. You're punishing me for having lost my family?"

The judge called security, saying, "This man is not normal," and the asylum-seeker cried back, "How could I be normal? You've locked me up for eight months, and there's no end in sight."

ICE exists to lock up and remove "undesirable" people. Like the population most affected by prison mass incarceration in the United States, the majority of deported immigrants are men of color. In the swell of anger fueled by growing consciousness of ICE's human rights abuses against migrant families and children, men of color have been markedly absent from the conversation.

Migrants of all genders suffer unique challenges; women are particularly vulnerable to sexual abuse at the hands of American guards, and LGBTQ folks are denied a wide range of human rights in immigration detention. However, the specific disadvantages that male migrants face also make them vulnerable to exclusion from the mainstream concern about families, women, and children.

Migrant men of color, at the crux of racial and gender stereotypes that conspire to denote aggression and predation, are particularly susceptible to the label of "undesirability" and the fate of detention and deportation. A gory tradition of being stereotyped as sexual aggressors, savages, terrorists, and thugs has led to racial profiling, lynching, police shootings, and the mass incarceration of men of color in this country. Media depictions associating border-crossers with floods, diseases, crime, and drugs, the president's promise to keep out the "rapists" and "animals" south of the border, and right-wing preoccupations over national security, tightening the border, and "America first" paint migrant men of color as the most objectionable intruders. They exist in ICE detention under the unjust baggage of an identity that is less likely to elicit human empathy from judges, deportation officers, journalists, and even the liberal masses who may be moved by the plight of children and families.

Though many of these individual migrants may be detained alone, they have ties to people on the outside. Like the children and mothers currently in the news, many of the single men in detention centers are also members of fragmented, aching families.

Like the children and mothers currently in the news, many of the single men in detention centers are also members of fragmented, aching families.

Some of the men who write to me from detention mourn the families they have lost, the children who may go hungry without them. One man wrote of his debilitating grief over losing his partner, his first love, who was mutilated and burned alive by homophobic vigilantes. Some describe the horror of inescapable visions—the assassination of their father, the rape of their sisters, the dismemberment of their mother's body. Some have no idea where their family may be. Some tell me of their dreams to reunite with their families one day. Others tell me of their terror that they might never see their families again.

We might recognize these men's humanity through their relationships—sons, fathers, brothers, and husbands ripped away from their vital human connections are compassion-worthy characters. The family adds a degree of sympathy and vulnerability to men. But recognizing the humanity of detained men via their familial ties becomes a dangerous game of respectability and tempering the "dangerousness" associated with male migrants of color by associating them with softness that is not otherwise presumed to be inherent.

Other migrants remind me that they are entirely alone; they have no family. They're also worthy of our empathy.

Furthermore, migrant children in youth centers will be handcuffed and transferred to adult ICE prisons on their eighteenth birthdays. What of these young people? At what point do they cross the threshold from heart-wrenching child victim to threatening adult migrant?

How can we extend empathy to all degrees on this threshold of human suffering?

To achieve justice for those incarcerated and traumatized by agents of our government, we need to wholly re-envision who we perceive to be vulnerable, who we can read as recognizably human, and who we exert our empathy towards. We need to adopt a compassionate response that includes people not traditionally typecast as defenseless, and we need to imagine a notion of humanity that is capacious enough to encompass people who have been denigrated as "removable." We can't stop at the plight of women and children.

An asylum-seeker recently told me that while he was incarcerated, he grew to realize that Americans—who think of themselves as glorious defenders of democracy and international humanitarianism—must be wicked. Only wicked people would allow such injustice to happen to people seeking refuge in their country.

I cannot contain the shame I feel for how our country receives asylum-seekers with ruthless vitriol, with incarceration, and with policies that strip away human rights. Cultural theorist Elspeth Probyn has emphasized the productive possibilities of shame, calling it a "gift of humanity" in its capacity to link us to one another and move us into action. She asserts, "In its self-evaluative role, [shame] can even be self-transforming."

An asylum-seeker recently told me that while he was incarcerated, he grew to realize that Americans—who think of themselves as glorious defenders of democracy and international humanitarianism—must be wicked.

I am ashamed that the people who fled totalitarianism and violent repression in their homelands — the kind which Americans so loudly disavow — may fall victim to similar forces of intolerance in the United States. Americans have a tradition of complacency with our government's selective upholding of human rights. I hope our shame will continue to move us into action against ICE detention. I hope it will compel us to feel the pain of detained migrants of all legal statuses and genders and familial structures and to fight until we fully tear down the American tradition of incarcerating of people of color.