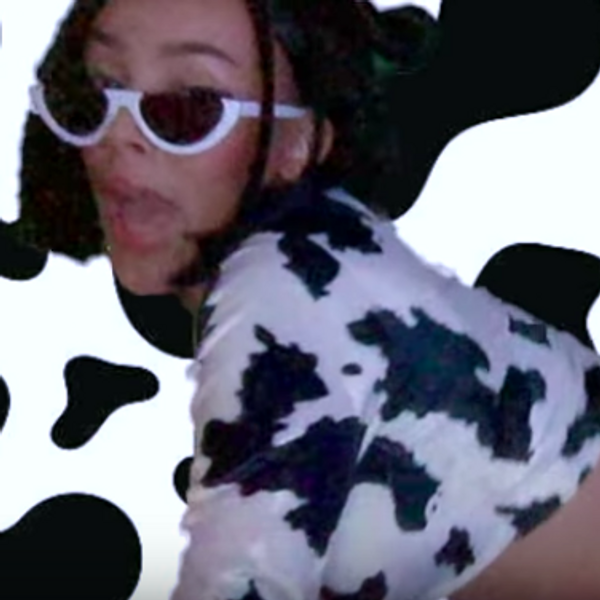 When it comes to social media, the phrase "double-edged sword" couldn't be more on the nose. Between the beauty YouTuber scandal that sunk a thousand subscriptions, and the viral rise and near-demise of Los Angeles-based singer, songwriter and producer Doja Cat (nee Amalaratna Zandile Dlamini), the month of August proved that the Internet remembers all. Dlamini, who has been making music for years ("So High" is still one of my fave bops), went viral last month with the release of a hazy, absurdist-leaning music video and single titled, "Mooo!" Yes, the song is written from a bovine perspective. Yes there are cow outfits. While the video was still making the social media rounds, some of the singer's old tweets re-surfaced, exposing her past use of homophobic language. The Internet's collective outrage quickly followed.

Of course it's disappointing when someone we've come to admire or whose talent has enriched our lives shows us that their actions don't necessarily align with our personal beliefs, but it's also important to be mindful that these very same individuals are undergoing their own process of growth and learning, just in a vastly more public setting. When we embrace the idea that visibility means our appointed champions can't make mistakes without being permanently dismissed, then we begin to chip away at the basic right to evolve. Although Dlamini issued three separate apologies, the first, which many felt was tone deaf, seemed to attempt to express this sentiment (though it rather unfortunately danced around the actual issue).

While it acknowledged her use of homophobic slurs as inappropriate, it was a pretty anti-climatic apology that left fans of the singer disappointed. After incurring yet another round of backlash she responded again, tweeting, "I've used horrible derogatory and hateful words toward people out of ignorance...I'm sorry for anyone I've offended or hurt deeply." She then amended the statement yet again, adding, "I apologize for the derogatory terms I've used in the past and no one should be discriminated against for their race, religion, or sexual orientation."

YouTuber Laura Lee sparked similar outrage and was subsequently dropped by from partnerships with several brands after her old racist tweets were uncovered following a spat involving Jeffree Starr, Gabriel Zamora, Nikita Dragun and Manny MUA. Lee also lost thousands of subscribers and was forced to issue a tearful apology that later became the fodder for memes. Both experiences demonstrate how simultaneously powerful and problem-riddled our connected culture can be.

On the one hand, largely self-policed platforms allow us to share our talents, eccentricities and unfiltered thoughts with anyone, anywhere and at any time. However, doing so creates a maelstrom in which high visibility and recognition can happen so suddenly that it simply isn't realistic or possible for the average person to prepare for what that actually might mean. As a result, infamy is unfortunately an equally as likely by-product to pure fame, particularly because most of us don't truly grasp the permanence of our online footprint.

Of course it stands to reason that sharing so much of ourselves while living in the metaphorical close quarters of the digital world is bound to breed these issues. Social media doesn't inherently lend itself to nuance — on Twitter we interact in abbreviated thoughts and on Instagram we tend to capture snapshots of our best moments. And when we interact with others within such limited parameters, there is a tendency to forget that someone's online presence is not a holistic reflection of their personality, nor is it always an accurate indicator of their personal evolution.

Even in a social climate where accountability is necessary to create change, it's still important to remember that we are all fallible. Admittedly, when you're deep in the throes of indignity it's quite easy to forget that even the most intelligent, empathetic and just among us are still one poorly constructed tweet or uninformed joke away from being slapped with a scarlet letter that justifies a life-altering public shaming. So rather than wielding the power of group outrage to act as the judge and executioner for every offense that falls into our purview, we should learn to distinguish when the complete derailment of a career or a life is warranted, and when correcting someone with compassion without withdrawing all support is a better option.

Imagine that the only thing you care about is people hearing you sing or seeing you act, but doing so requires your conscription and frequent participation in a massive group chat with half of the world. There's also no 'leave chat' or mute option because people need to have access to you for your brand to be successful — that's social media in a nutshell.

The upside of having our proverbial phone in a constant notification frenzy is the fluid exchange of information and new perspectives that have added dimension and depth to our culture. The downside is that it's hard to keep up while digesting and processing what you've already consumed; it's even harder to express our emotional and intellectual growth over long spans of time. Obviously that doesn't excuse poor behavior or insensitivity, but the truth is as tempting as it may be to fantasize that those we admire have always been poised, graceful, well-spoken and thoughtful, they rarely actually are. Like the rest of us, they say and do things they regret, and like most of us, they don't always know the right way to make amends.