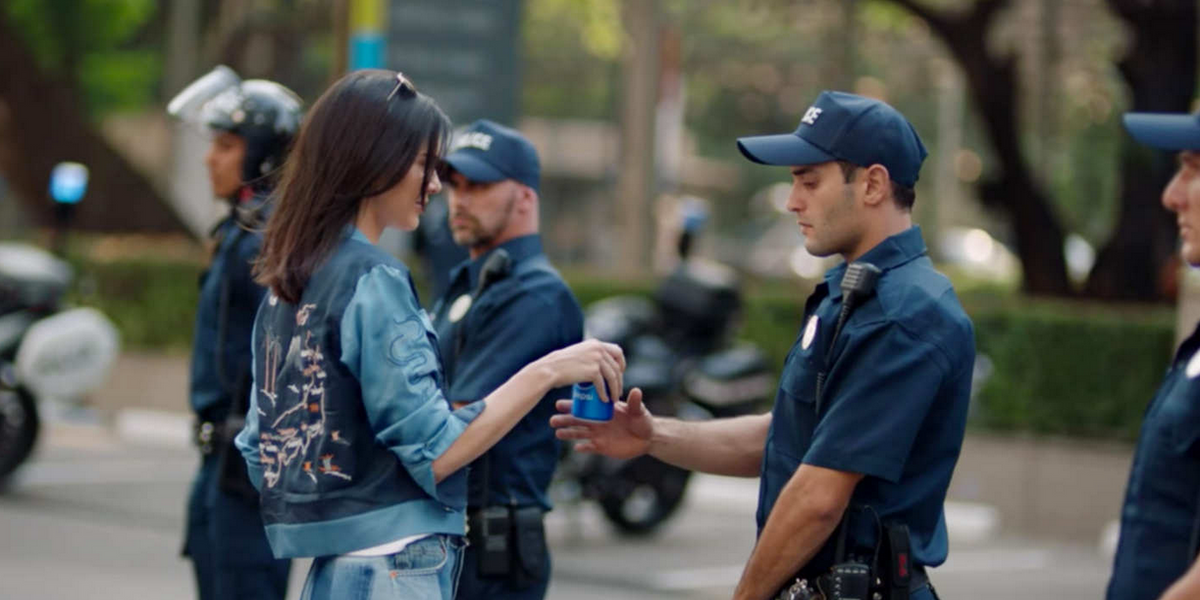 Can Brands Be Cool Anymore?

They've got their work cut out for them.

The last two weeks have been a crash course in branding gone terribly, horribly wrong. After trying to capitalize on activist culture, Pepsi was forced to pull an ad and issue an apology for the campaign that had Kendall Jenner achieve peace between protesters and police officers with the help of a soft drink. Then, after violently removing a passenger from an airplane, United Airlines offered a pseudo-sorry by blaming the incident on an oversold flight. And while both represented vastly different ends of the spectrum of nightmares (a marketing clusterfuck versus a breach of human rights), they still shed light on the crumbling nature of our relationship with brands: mainly, that maybe brands should just stop trying so hard.

After all, brands haven't always thirsted for friendship. As Mad Men helped illuminate, the industry once heavily relied on a type of marketing hierarchy: brands dictated the terms through which customers would be compelled to buy them, and customers would subscribe to a particular product or logo to assure that they were building a life defined by product-set norms.

With the rise of consumer (and general) cynicism during the nineties and noughties, brands began to adjust their 'top down' model and try harder to reflect the culture around them. And yet they still remained one step ahead. The massively successful Y2K-era Budweiser campaign (a.k.a. dudes shouting "WHASSUP?" into the phone) became a late '90s/early aughts touchstone and ode to male friendship and predated the explosion of Apatowian-style bromance flicks.

But if ten years ago brands were attempting to be in tune with the culture while still influencing it, that model has changed today. Social media became an equalizer and thanks to Twitter, Instagram, or even official Facebook pages, consumers now dictate the terms through which brands can operate. An @-reply leads to a conversation between social media managers and customers, all under the guise of communicating with the business itself. Or, when social media accounts go rogue (like when McDonalds' account was hacked and tweeted anti-Trump sentiments), the brands earn kudos and new customers. But both circumstances reflect the flipped dynamic of advertising's original model: brands are now at the mercy of consumers, who realize they can ultimately make or break them.

And yet by ceding complete control to the consumer, brands have become less cool. The Pepsi ad tragically demonstrated how brands desperately chase after their audiences and their audience's perceived ideologies ... despite these same audiences not wanting that. In 2017, we don't need to feel "understood" by brands, nor do we need to feel like they're our friends or our allies. (We can tell when a company is just 'talking the talk' and not 'walking the walk so if you actually want to be an ally, donate a portion of all sales to a non-profit -- or don't back parties or politicians who actively campaign against things like human rights.) We know the person helming an official Twitter isn't the CEO of the company, and we know that while our money is important to a brand or business, we -- as people -- aren't.

Which is why the only brands making real headway seem to be those who reject advertising norms -- and especially in fashion and beauty. Names making the biggest impact are ones staging a comeback after years out of the spotlight (like Adidas and Juicy Couture) and their campaigns rest squarely on showcasing the talent of artists like Petra Collins or their celebrity collaborators (see: Kanye West). Even Rihanna's recent collection with Puma has rejected the approach to marketing that gives consumers the power the way most brands tend to: her S/S 2017 campaign, shot by photographers Luigi and Iango, delivers only striking images of Rihanna wearing Puma. It doesn't care if you buy it, and that makes it cool.

We also know that with our increased awareness, we're wading further and further into the depths of post-marketing. As brands trip over each other to find new and #hip ways to appeal to younger demographics, repainting themselves in shades of the revolution, we edge away, comforted in knowing that we finally have the power in our longstanding relationship -- and that somewhere, Don Draper is freaking out about who clued us into not needing pantyhouse. And while it's a scary thing to imagine the reconstruction of an industry as familiar as it is powerful, it can work to create bigger and better conversations around marketing and branding and why products are still considered an extension of human worth.

And that ideology will also serve to make brands more creative and more interesting, too. With the pressure off to be our pals or to pander to our sense of fear in the wake of international crises, there's going to be more room for transparency or simplicity or even honesty -- and especially more campaigns that market the pieces and not the myth of the lifestyle attached to them. As we know, the world is changing and we are changing in it. And the best way for brands to adapt is to welcome those changes and let us make ours, trusting that if they're delivering something worthwhile, we'll always come back to them.