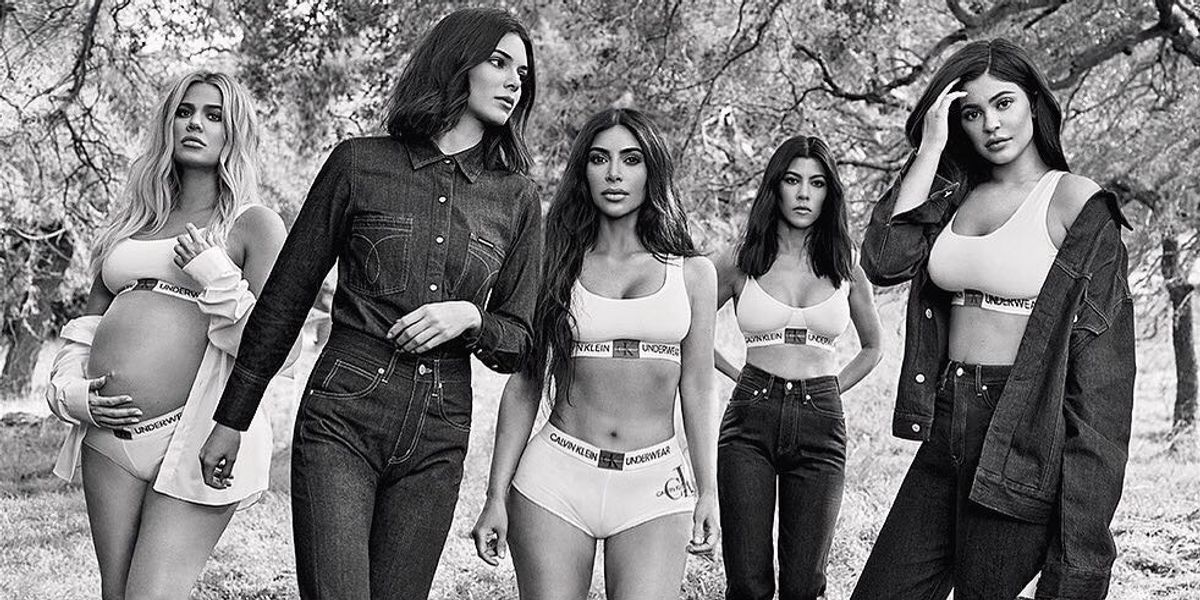 Calvin Klein has released a new family-centric ad campaign featuring none other than the Kardashian-Jenner family. Shared by both the brand as well as Kim Kardashian, the five sisters stand in a tree-filled grassy area in various stages of undress. It's a joint-advertisement for both Calvin Klein Jeans as well as Calvin Klein Underwear, as the group models some of the most essential items in a girl's wardrobe.

From left to right, Khloé wears a sports bra and matching white underwear, along with an open-front white button-down shirt; Kendall strolls across the image in a chic Canadian tuxedo; Kim stations herself in the middle wearing nothing but the underwear set, Kourtney hangs near the back in a pair of high-waisted jeans and a white sports bra; and Kylie rounds out the group in a similar look, topped by an oversized trucker. In her hand is a quilt not unlike the one she famously draped her then-secretly-pregnant frame in for last season's campaign. In contrast, with this image clearly shot before the birth of Khloé's daughter, True, she holds her growing belly in all her pregnant glory.

CALVIN KLEIN on Instagram: “Our family makes us who we are: @kimkardashian, @kendalljenner, @kourtneykardash, @kyliejenner and @khloekardashian are family, and so are…”

CALVIN KLEIN on Instagram: “Up close and personal: @kendalljenner captures her perspective on set of the #Fall2018 #CALVINKLEINUNDERWEAR and #CALVINKLEINJEANS campaign…”

The brand has also released a film of the shoot that plays like a home video, as the sisters play in the grass, hold hands, swing on a rope swing, and take photographs of each other in both the aforementioned looks as well as similar cotton underwear sets in a deep tone of black. The clip is captioned, "Daughters. Sisters. Mothers. Friends. Shot in March 2018."

Though these are the only images that have yet been shared by the brand, if last season's #MYCALVINS campaign is any indication, there are not only more shots of the Kardashian-Jenners, but also other families and best friends to come. Stay tuned!