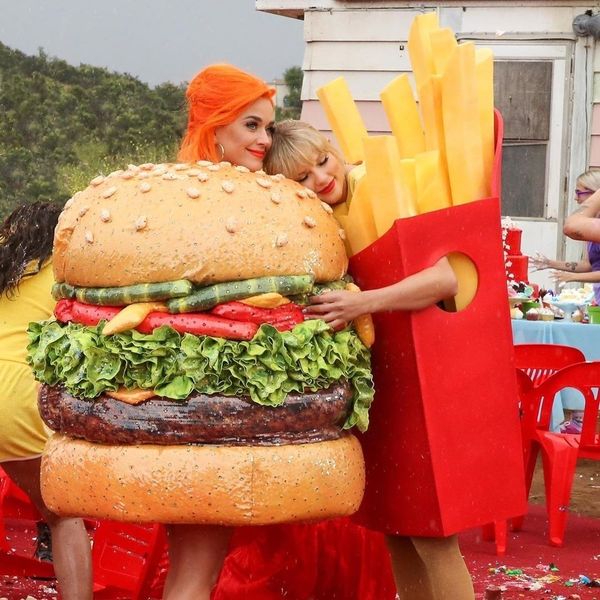 Katy Perry and Taylor Swift are no longer enemies — they might even be actual friends, at least according to this tray of cookies. The warring pop stars have been gradually healing their relationship over the past year, ever since Perry extended a literal olive branch to her rival. Now Perry has made one of several very notable cameos in Swift's new music video, wearing her Met Gala afterparty Moschino dress. Everyone's relieved, including... Calvin Harris?

Yes, the very same Calvin Harris who dated Swift between 2015 and 2016. He "liked" Perry's Instagram post about the burger and fries moment, stopping short of interacting with Swift's version of it. (They don't follow each other.)

Harris and Swift had a very public break up, and things didn't appear to end particularly amicably. Swift quickly moved on with Tom Hiddleston,and Harris appeared to take Perry's side in her feud with Swift post-breakup by collaborating with her on the song "Feels." He also made pointed reference to Swift's love of drama in that controversial 2016 tweet about his and Rihanna's hit song "This Is What You Came For," which Swift took credit for co-writing.

"Hurtful to me at this point that her and her team would go so far out of their way to try and make ME look bad at this stage though," Harris tweeted in August 2016. "I figure if you're happy in your new relationship you should focus on that instead of trying to tear your ex bf down for something to do. I know you're off tour and you need someone new to try and bury like Katy [Perry] ETC but I'm not that guy, sorry. I won't allow it."

It seems like everyone has put all that drama behind them, which is frankly for the best. 2016 can't come to the phone right now, she's dead. Maybe we'll get a Calvin cameo in the next Lover music video? Hanging out with Hiddleston?Wouldn't put it past Tay at this point.