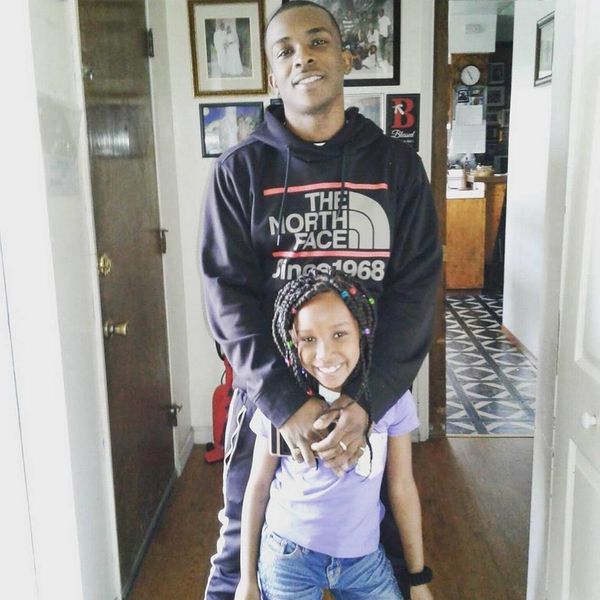 Twenty-two-year-old Stephon Clark was holding a cellphone when he was fatally shot on Sunday, March 18 by two police officers in Sacramento, California, the Sacramento Bee reports. Officers say they believed he was holding a weapon in his grandmother Sequita Thompson's backyard when they fired at him 20 times, killing him.

"He was at the wrong place at the wrong time in his own backyard?" Thompson said Tuesday. "C'mon now, they didn't have to do that."

Police say they arrived on the same block as Thompson's house, where Clark was staying, responding to a 911 call about a man breaking into parked cars. A helicopter from the Sacramento County Sheriff's Department was also on the scene. Deputies in the helicopter reported seeing a man holding a "tool bar" in a nearby backyard and directed officers on the ground to that location.

The deputies in the helicopter then say they saw the man using the "tool bar" to break into a window. Police later said the window was the rear sliding glass door of a home adjacent to Clark's grandmother's. (The resident of that home, 88-year-old Bill Wong, said he didn't see or hear anything that happened Sunday night). Police then say that after allegedly breaking Wong's window, Clark ran and jumped the fence into his grandparent's yard and headed to the front of the way, looking into a car along the way.

Clark was holding only his cellphone — not a tool bar or a gun — when he encountered police, who fired at him 20 times, killing him.

Clark's family said that because the front doorbell was broken, family members would often knock on the back window to indicate they needed the garage door to be opened, and that that's likely what Clark was doing.

A press release from the police department says they entered the front yard of Clark's grandparents' house and saw him along the side of the home. The department says officers "gave the suspect commands to stop and show his hands," but that he "immediately fled from the officers and ran towards the back of the home." Then they said Clark "turned and advanced towards the officers while holding an object which was extended in front of him."

Clark's grandmother said the object was in iPhone, and that a pair of headphones was also found at the scene. No gun was found.

Each of the officers fired 10 shots, for a total of 20, according to Department spokesman Sergeant Vance Chandler. Clark was pronounced dead at the scene. He also said that while the on-scene investigation was concluded Tuesday, the overall investigation would take longer and would be investigated by homicide detectives and internal affairs within the department. That internal investigation will then be reviewed, as is protocol, by Sacramento's Office of Public Safety Accountability, which will then release a public report.

There is body and dash-cam footage yet to be released, but it will be soon. A city policy was enacted in 2016 after the officer-involved shooting of Joseph Mann in North Sacramento that footage be released to the public, who is already calling for further investigation. Chandler said the Department would also release footage shot from the helicopter.

"This is a moment of truth," community activist Berry Accius told the Sacramento Bee. "This is the moment that I think a lot of us have been expecting. This is definitely where transparency, accountability and justice are really going to be put in full display with this new regime of policing. I think a lot of us in the community have been told there will be a whole other way of how the police in Sacramento police the community, especially black and brown people, and this will be the test."

Clark's family has started a GoFundMe to raise money for his funeral arrangements, and to bury Clark next to his brother, who was also killed by gun violence. Clark left behind two sons, 3 and 1 years old.

"They're asking, 'Where's Daddy, where's Daddy?" Manni, the mother of Clark's children, said. "He was a part of our family. He was our rock."