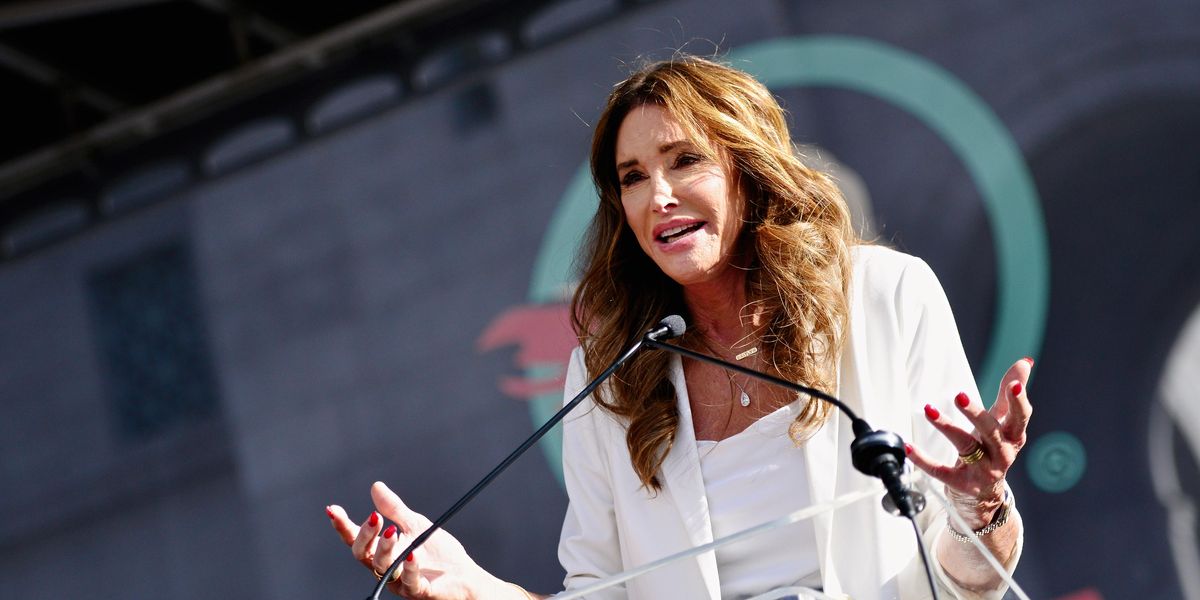 This past weekend, the former Olympic gold medalist responded to TMZ's question about recent Republican efforts to ban trans athletes from competing in sports consistent with their gender identities. And her response?

"It's a question of fairness," Jenner said. "That's why I oppose biological boys who are trans competing in girls' sports in school."

"It just isn't fair," she went on to say, before declining the reporter's follow-up about whether her stance "delegitimizes" a trans person's identity. "We have to protect girls' sports in our schools."

I didn’t expect to get asked this on my Saturday morning coffee run, but I’m clear about where I stand. It’s an issue of fairness and we need to protect girls’ sports in our schools.https://t.co/YODLDQ3csP

However, Jenner later went on to double down on her statement via Twitter by saying that while she was caught off-guard by the question, she was still "clear about where I stand."

"It's an issue of fairness," Jenner reiterated. "And we need to protect girls' sports in our schools."

Naturally though, her comments were met with swift backlash from those who wondered why she was trying to undo the "work that helped [her] be where [she is]," while others just called out her "hypocrisy."

"So wasn't unfair for her to take part in a golf tournament with women in 2016?," as activist Dr. Shola Mos-Shogbamimu wrote. "Pretend to thank trans athletes in sports for being themselves in her 2015 acceptance speech for an award?"

Another person added, "She's in no way an ally to the LGBTQ community. She's a horrible, selfish opportunistic fraud."

Why are you undoing work that helped you be where you are.

I just can't take Caitlyn Jenner seriously - it's the hypocrisy & double standards for me.

So wasn't unfair for her to take part in a golf tournament with women in 2016? Pretend to thank trans athletes in sports for being themselves in her 2015 acceptance speech for an award?

Starting out her campaign as I knew she would, MAGA loon Caitlyn Jenner Kardashian agrees with GQP bigots that trans children should be banned from all sports because it’s “not fair.”

She’s in no way an ally to the LGBTQ community. She’s a horrible, selfish opportunistic fraud.

Not only that, but others like actress Trace Lysette explained that "when you're on hormones and or blockers there is not an advantage."

"I ran track at the club level with college girls and trust me there is no advantage," Lysette said. "I would have went pro if I was able to run the times I ran before hormones etc."

Cait... this ain’t it. When you’re on hormones and or blockers there is not an advantage. I ran track at the club level with college girls and trust me there is no advantage. I would have went pro if I was able to run the times I ran before hormones etc.

Girls belong in girls sports. Trans girls are girls. There is NO evidence of trans girls outperforming their cis peers. There is only evidence of them being harassed and harmed by their peers. Drop this, develop your hobbies and spend your time NOT doing harm to trans people.

Granted, Jenner's comments aren't entirely surprising given that she's always been a die-hard Republican and is reportedly using the same GOP strategists who helped get Trump elected for her own gubernatorial bid. She was also a notable supporter of the former president until 2018, when she wrote a column about his "relentless attacks" on the trans community.

Even so, Jenner's views are worrying as they come at a time where a number of states have introduced anti-trans legislation targeting children, including 22 bills in 17 states specifically trying to bar trans kids from sports consistent with their gender identity. Not only that, but as some pointed out, what makes her comments extra concerning is the actual potential of her becoming governor of California — no matter how slim the chances are.

See what else Twitter is saying about Jenner's views below.

Caitlyn Jenner is running specifically to oust the Governor that helped protect transgender kids, teens and adults.
She's running as a Republican, showing her support for the party that made providing trans health care a felony in AR & is trying to expand that effort nationwide.

Caitlyn under this law you never would have made it to or competed in the Olympics.

Since all you're concerned with is yourself, think about how you yourself would have never been able to play or compete in sports as a trans kid.

You are such a traitor @Caitlyn_Jenner
So we need to “protect girls sports”from other girls now? And fairness? Don’t you know how testosterone blockers work? https://t.co/JI35faSdbc