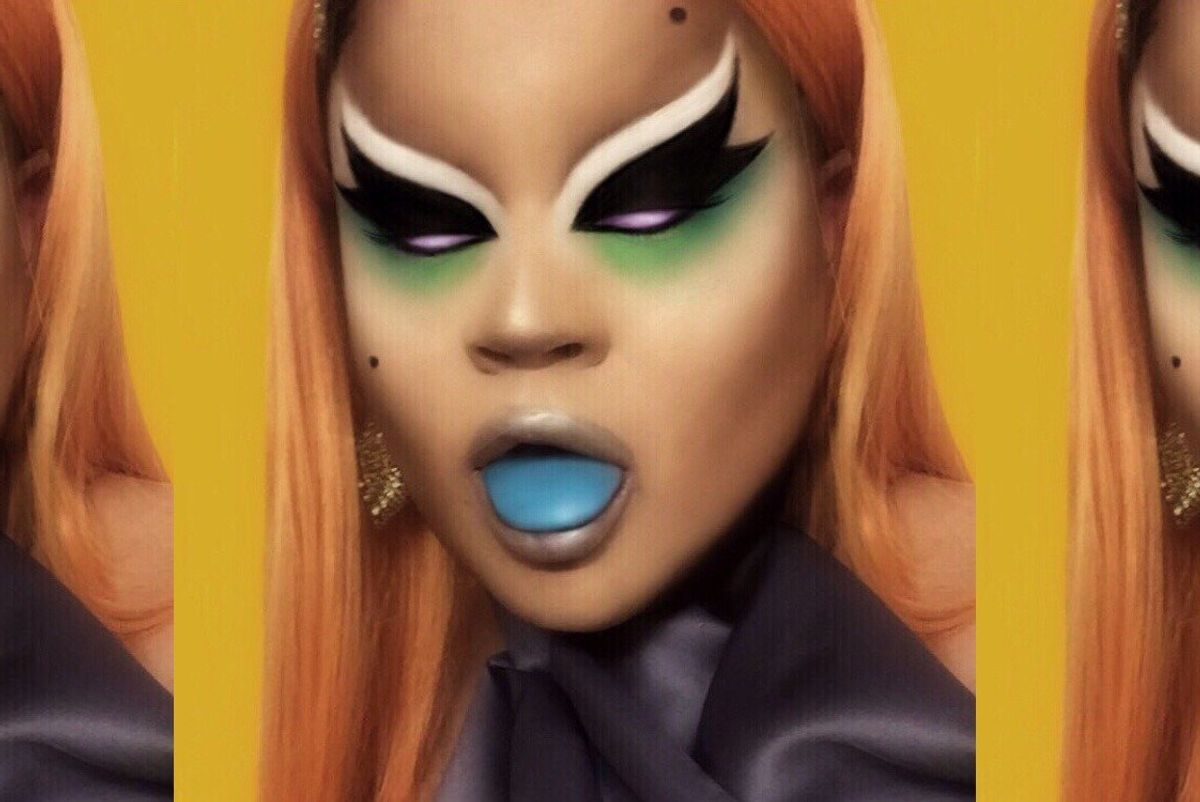 Cae Monae Wants to Liberate You With 'DICKGIRL'

The process behind Cae Monae's music isn't technically involved or motivated by some greater capitalist agenda — it's entirely instinctive, created exclusively on her iPhone and released to the world whenever she decides it's ready.

In the case of DICKGIRL, Monae's new three-track project, she began building the songs this fall, generously layering soundbites, beats and samples into something of a DIY epic. Dubbing it a "Transsexual Amateur Sextape" — not a mixtape, not an EP — DICKGIRL is finally ready for listeners, and it's sure to be disruptive.

The project artwork, also shot and edited by Monae on her iPhone, is a visual reflection of DICKGIRL's unruly sonic palette. On its opener, "Tropicana," batshit Willy Wonka synths bubble beneath the artist's manic rhymes. "I'm the fat tranny bitch, that'll start a riot," Monae declares, her voice pitched down with a devilish bravado. "We got John Wayne Gacy for a president," she continues.

Monae created the next track, "Cisphobic," to eradicate any argument that cisphobia exists in society, much like people argue "reverse racism" is real. It's designed to be ironic, politically charged, but grounded in irresistible dance production. "Cis people scare me," Monae admits throughout — a dramatic statement she says is rooted in truth, but ultimately aims to shake up the conversation.

"Shemail" takes a tongue-in-cheek turn, as Monae repeatedly demands, "Bend me over daddy," while lacing in lyrics like, "Suck my Zetus Lapetus," above bright, bouncy beats. "Welcome to the FFS Big Fat Pussy," she announces at one point, wrapping you in a dizzy orbit of queer references that at once acknowledge, celebrate and critique today's LGBTQ landscape.

Listen to the PAPER premiere of Cae Monae's DICKGIRL Sextape, below.

What was the production process like for creating this project?

Oh, bitch. The production process was very erotic and long. I began writing in October. It took about a week to get a substantial collection of rhymes and poetry. The initial concept for DICKGIRL was much different. I wanted a trap/rap album with an industrial twist. After spending almost a month trying to marry the track with the lyrics, I realized I needed to trust my roots in music, so I scrapped the instrumentals and began producing the tracks myself. Like the rest of my work, it was all produced and recorded on my iPhone. It took another week to build up a sound library containing sound clips and audio I've collected for years. Everything was distorted and remastered to build up the tracks to what they are now. After a week of producing the three instrumental tracks, I tested out some of the lyrics over them and it was magic.

When you look at this project in its entirety, what do you think is the greater message?

The larger message is one of liberation. This whole process was done with thick intensity and sexual passion. I was going through, what seemed like, yet another transition in my life — one of healing and rebuilding. This is my war cry, my freedom chant, and seduction spell all in one. This project is my arms held high in submission, but my fists are clenched in resistance.

How do you come up with your raps?

I spent afternoons and nights with a bottle of wine, a fat bag of hybrid, and my notebook sifting through my mind, connecting dots and correlating emotions. I realized I had a lot to say about sexual and political liberation, so I said it. I wrote everything to Rick Ross instrumentals and I had to be in my bathroom. I'm not sure why that was such a necessary part of the process, but it very much was. Anything or anywhere else simply didn't work.

"Tropicana" was written to be a Trump/Pence diss track. The original lyrics were so aggressive and explicit, I began questioning if it was even legal. So when recording it I took my favorite parts and mashed them up until it became what it is now. The title references oranges and juice, so it should all make sense. If not, it's fine.

Is "Cisphobic" inspired by one experience in particular?

"Cisphobic" is the irony piece — a dark hilarity that cisgender people, very similar in experience to Euro-Americans (white people), can't feel the systems that support them. Without those systems in place they become equals, yet most would see it as a drastic loss in stature and control. "Cisphobic" is my way of saying cisphobia (similar to "reverse racism") doesn't exist. However, cisgender people, in some cases, truly do scare me.

How do you hope this project will impact the community?