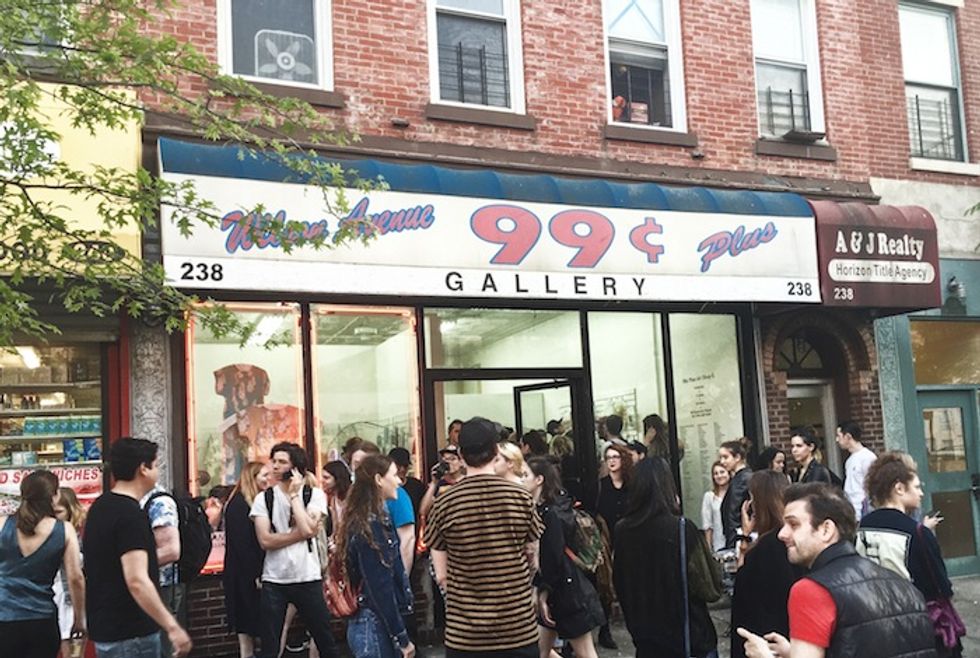 Your typical dollar store is stuffed to the brim with a slew of commercial oddities like off-brand toothbrushes bearing bristles stiff enough to make your gums bleed or pallets of cat food postmarked with expiration dates circa 2005. But what happens when you gut one of these market-based bottom feeders in favor of furthering a vision of collective artistry and innovation? It's this mission that drives the efforts of 99¢ Plus, a mixed-media storefront, art gallery and studio space all rolled neatly into one and plunked down onto a quiet Bushwick street beneath a humble vinyl awning.

Inside you'll find white walls peppered with a steady rotation of conventional and atypical art pieces alike: shiny mounted photographs, sculptures, hand-bound zines, knickknack stuffed dime bags, totes and anything else that happens to be featured within a given week. One month the gallery was transformed into "CHILLZONE," a comprehensive "living room installation" spanning the work of over a half-dozen artists; during another, the space was home to "HOW TO ABANDON A BURNING HOUSE WITHOUT PANICKING," a bold yet more traditional solo exhibition displaying painted photographs by Sarah Lawrence grad, Charlotte Patterson.

Founded by artists Simran Johnston, Zoe Alexander Fisher and Riley Strom, what is now a thriving gallery (boasting mentions by The New York Times, among other outlets) initially started as pop-up shop "Hand Job Gallery Store," whose name nods to both low-brow middle school humor and high-brow commentary on the inherently masturbatory nature of capitalism and the art world. The Hand Job Gallery Store (or HJGS) just celebrated its 2-year anniversary and sits adjacent to the gallery's exhibition space. It has a deliberate thrift store vibe, emphasizing more accessible items like necklaces, vases and limited-run graphic novels whose prices range from $0.99 to hundreds of dollars whereas pieces sold directly by the 99¢ Plus Gallery often net sales in the thousands of dollars.

The founding gallerists are a tightly-knit trio, often working out of 99¢ Plus together, but operating bicoastally between LA and NYC whenever necessary. When asked about their space, they told us that they prefer to answer questions in tandem, unified in their vision to create a unique relationship to the larger art world. During discussions about the challenges that come with launching a gallery in New York City, they're quick to attribute the gallery's successful model to a generally malleable perspective on the use of space: "When we opened our space we didn't have a set idea of what the gallery needed to be or the right way to go about it -- I think that flexibility really helped eliminate a lot of the obstacles we could have faced because we were open to the organic evolution of the space."

While 99¢ leverages this flexibility alongside the dollar store aesthetic to breed an all-inclusive approach to art, it also merges the best of both NYC's emerging and established art worlds, able to comfortably house artists from opposite sides of the creative spectrum under a single roof. You might find pieces by rising art star -- and PAPER Beautiful Person -- Chloe Wise a stone's throw from works by an established heavyweight like Rico Gatson. This all-embracing aura surrounding the gallery allows all types of artists to flourish, including ones from the local community. It's not uncommon to find neighborhood children working feverishly on their own pieces within the studio space, often venturing out to proudly parade their latest drawings to passers-by and delivering hugs to the gallerists before disappearing behind white walls again.

When it comes to putting on shows, the gallerists explain that they tend to lean towards "artists and curators who are interested in using the space in unusual and immersive ways"; thus far they've exhibited hand-painted clothing by Trudy Benson, an abstract grayscale painting from Ellen Berkenblit and an ink-drawn nude via Chris Lux to name just a fraction of the contemporary work streaming into the gallery.

The "multi-tool for chakra alignment" seen at Probably Not


A recent night featured Probably Not, a collaborative one-night exhibition and experience curated by artists Luke Libera Moore, Will Rose and Corey Rubin. The new-age exhibition included customized lighting outfitted specifically for the evening, as well as an ambient soundtrack scored to accompany the primary attraction: a transparent, neo-back-scratcher created (ostensibly) to merge Eastern spirituality with Western convenience. Described as a "multi-tool for chakra alignment," the item displays open hands on either end (for meditation or for back-scratching at your discretion), mandala patterns across and doubles as an incense holder. It held a continual supply of freshly burning incense throughout the evening, sending wafting smoke out into helix-like spirals toward the gallery's ceiling.


During the show, featured artist Luke Libera Moore expressed his thoughts on New York City and its frenzied scene. He told us, "Every time I reach the brink of sanity in my long-running love-hate relationship with this city, when I feel like all is lost, and that New York has finally collapsed into the void, a new venture pops up, new blood surges." And if it's new blood that allows for New York's continual evolution, then it's galleries like 99¢ Plus that provide the pulse.

Thank you to Zoe Alexander Fisher, Simran Johnston, Riley Strom and Joey Chriqui for their help with this story.