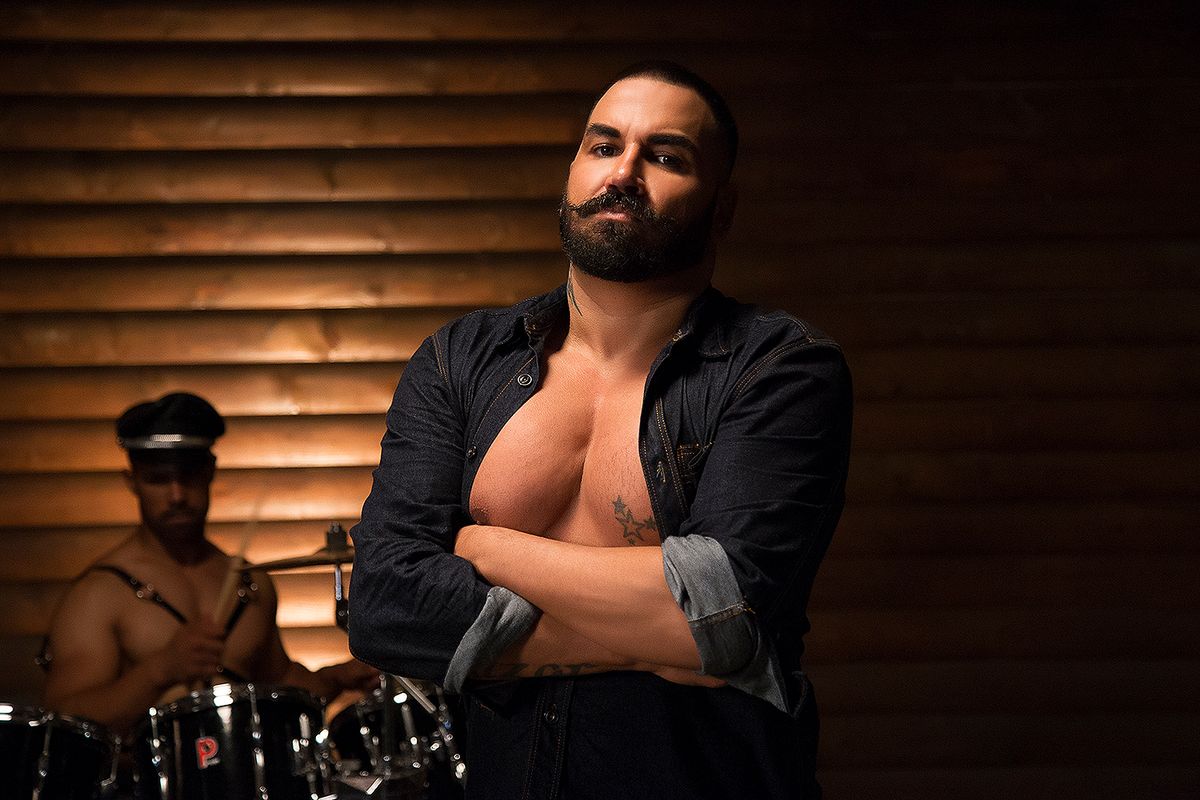 A few months ago, a video of Azis wincing as he got chest hair implants went viral in Bulgaria. "I was so impatient," he tells me of the experience. "I couldn't wait to turn into a bear." This transformation, for a performer who originally became famous as a drag sensation, has in fact been a long time coming.

Born in Bulgaria's only women's prison as Vasil Troyanov Boyanov, Azis is Bulgaria's most famous (and infamous) celebrity, as well the country's most visible LGBTQ icon. For more than two decades, he has been the defining voice of Bulgarian music, as well as a spokesperson for LGBTQ rights and a one-time candidate for political office. Azis came onto the music scene in the late 1990s as Bulgaria was transitioning out of communism, and his music has always held true to the mix of influences that define Bulgarian pop-folk, or chalga. While many chalga artists will pump out one or two hits then fade into oblivion, Azis has held on to his fame through continuous reinvention. At 42 Azis has scaled back his drag look considerably, bulking up and ditching drag for the classic Balkan man outfit: jeans, timbs, an oversized watch and a puffy overcoat.

When he started out, Bulgarian pop fame looked very different. Like many post-communist countries, Bulgaria has a massive generation gap between those that grew up under communism and their children and grandchildren, most of whom were born into capitalism. Younger Bulgarians are, on the whole, more open and liberal than their parents. As a result, young gay, trans, queer, and non-binary citizens are increasingly comfortable with coming out — if not to their parents, then to their peers. In 2012, 47% of LGBT Bulgarians hid their sexual identities at school — by 2019, that number had dropped to around 41 percent.

While it would be presumptuous to give Azis full credit for that drop, his impact on Bulgarian culture and his role as a beacon of hope for young queer fans shouldn't be underestimated. "A lot of gay young people write to me and tell me that I am their inspiration to come out to their parents," he says.

Aziz's sexuality isn't the only hurdle he's faced. Although the genre has a mix of influences, most chalga performers are Roma, a marginalized ethnic minority previously swept aside under communist rule. "Chalga is made by dark people, dark-skinned people — we're not talking blonde people with blue eyes," Azis explains. "Chalga is the music of a people who have learned how to sing and cry at the same time."

In a country where hate crimes and unprovoked attacks on the Roma are alarmingly frequent, chalga is the rare medium where people of color in Bulgaria can gain fame and publicly express their culture. Chalga performers are — often in the same breath — lauded for their musical acumen and derided for performing "gypsy music."

Azis is keenly aware of the ways in which he stands apart from straight, ethnically Bulgarian performers. "People fell in love with my voice and they forgave my sexuality, but I'm not sure about my ethnicity," he says. "I don't think there's anywhere in the world where gay people of color are truly accepted or have an easy life."

Being both gay and Roma has allowed Azis to become the most extreme chalga musician of his generation. From a young age, he was attracted to the performative nature of drag, which came to define his early persona. "As a young person, I was eager to show what incredible thighs I had," he says. "It was like I was living my whole life for the moment I got up on high heels and started singing."

In some ways, the spectacle of drag performance arguably made Aziz's fame more palatable to conservative Bulgarians. In an essay on Azis's performance of sexuality, Plamena Kourtova suggests that his drag persona was a means of desublimating feelings of shame around queerness and Roma culture. In 2007, billboards featuring Azis in full drag embracing his then-partner, Niki Kitaetsa, were taken down by local governments for being too graphic. A few years later, he released a series of provocative music videos featuring him in drag and bleach-blond hair, gyrating for the camera. In the video for "Sen Trope," Azis dances and vogues in high heels and a thong, exploiting a traditionally feminine sexuality. The song's lyrics, essentially a list of luxury vacation destinations, exemplify chalga's obsession with unfettered consumption and luxury.

These antics garnered Azis an international reputation, including a spot on the New York Times' "25 Songs that Tell Us Where Music is Going." In 2012, hackers affiliated with Anonymous broke into a Russian court's website in 2012 to protest the trial of punk group Pussy Riot, they posted the music video for Azis's song "Mrazish."

"I think the image I've created over the years has been the bravest decision I've made, other than having my daughter," Aziz says. But, like any celebrity keen on having a long career, he knew he would eventually have to evolve. In a Bulgaria that's more liberal than ever before, he's now free to do so. Which brings us back to the chest implants.

"There's no rule that says that just because you're gay you have to be 50kg, effeminate and vulnerable," he says in reference to his new look. "You can look like a bodyguard and still be gay!"

Earlier this year, Azis released the music video for "Who Cares," his first song in English. The set: hardcore Americana — an idyllic small town, sparkling suburban house, and Azis in a tight cop outfit alongside porn actor Alex Marte. The plot: peak chalga. In four short minutes, Azis and Marte lust after the same woman, discover their mutual attraction and have sex, and get into a testosterone-fueled domestic dispute. The video ends with Azis giving his newborn child to Marte while police lights flash in the background and, somehow, getting hit by a passing car à la Regina George. It's classic chalga: over-the-top, campy and borderline absurd — but it also marks Azis's rebranding within a more liberal and accepting Bulgaria.