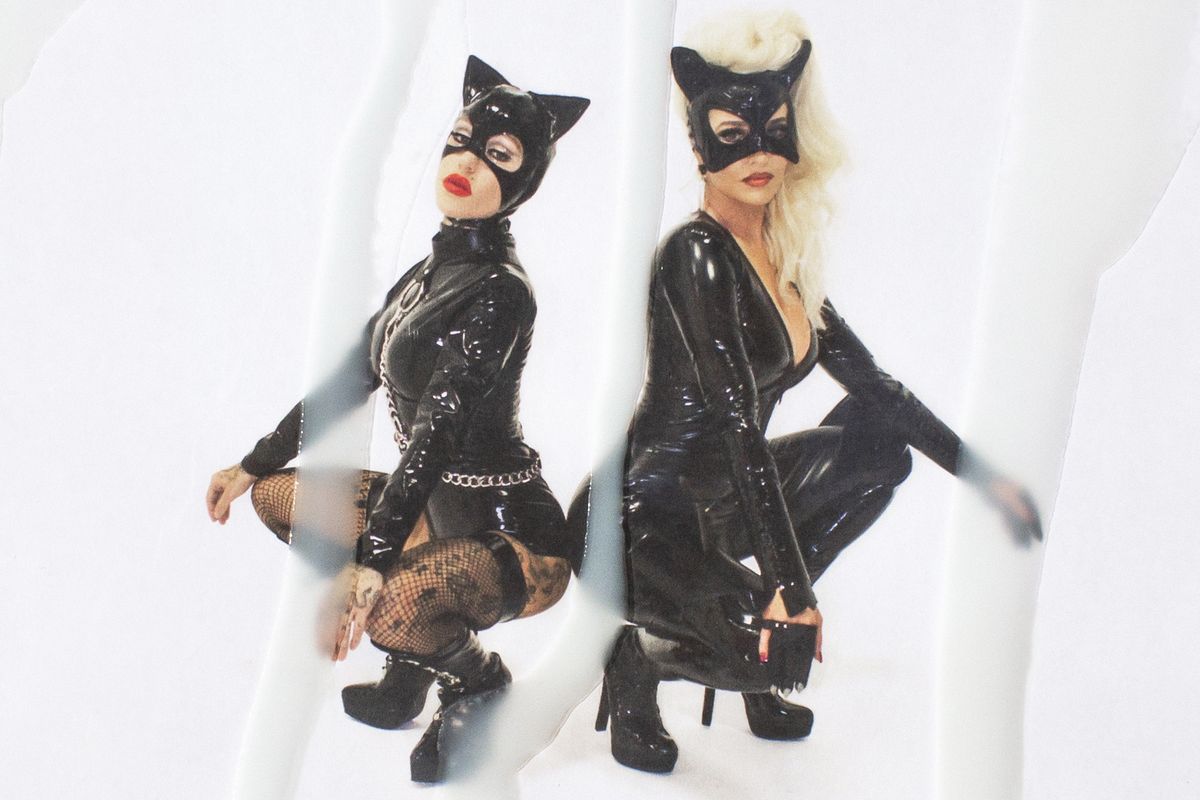 In their new video, Brooke Candy and Erika Jayne dare you to laugh as they push around human-sized yarn balls, lick their "paws" and chase actual live cats around in pleasers and full-body leather. No really: they want you to laugh. They're having a great time and so should you. This is camp!

The slick pussy power anthem is one for the books — file next to "My Neck, My Back," "How Many Licks," and... dare I say it, "Cattitude"? It's overflowing with one-liners like "Big mac pussy and an ass soufflé," "Pussy performs/ pussy need an Oscar," and "Call the police/ this pussy's illegal/ pussy on a watch list, CIA," which Brooke delivers in her signature scratchy slur, while skipping joyfully through a field of streamers.

On the second verse, we hear Brooke drawl this one "Pussy plush/ teddy bear soft/ pussy kush, roll it up raw/ Post Malone/ pussy a rock star," while squished into a bird cage, which Erika sits atop of lazily flicking a cat toy. That leads into Erika's favorite part, by the way: "My favorite part of the video is me in the leopard costume siting atop the bird cage while Brooke is in a back bend crawling out!"

Brooke and Erika make a dynamic duo, as we learned when they debuted the song live at V Files' NYFW show this weekend. Both are known for not giving a fuck in their respective fields, and their no-fucks energy is particularly apparent on the deranged part of the chorus, when Erika coos "Brookey, drippy, drippy, drippy drippin'/ Uh, gonna sippy sippy sippy sippin.'"

"Working with Erika Jayne was full fantasy," Brooke tells PAPER. "She is so professional, so much fun, and such a force to be reckoned with. I love how she doesn't take herself to seriously and just wants to have fun and create art that makes you smile. I hope this song and video makes everyone smile as much as it made us smile while we were making it on set."

"Drip" is playful complement to her 2018 collab with Pussy Riot, MNDR and Mykki Blanco "My Sex" — a vicious war cry of queer sexual agency. More directly it follows up the whispery, ASMR gift of "XXXTC" ft. Mallibu Miitch and Charli XCX, as the second single off her debut album SEXORCISM, which is out this fall.