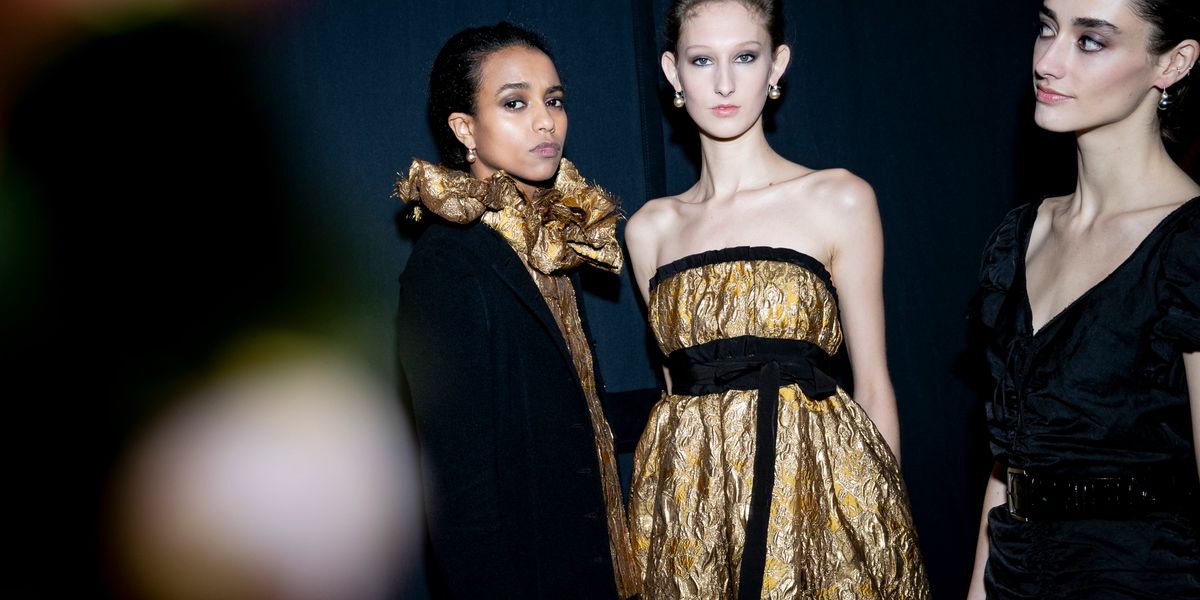 Since Laura Vassar Brock and Kristopher Brock founded their namesake collection in 2014, the label has been synonymous with the aesthetic ideals of romance. Structured boning, corsets and skirts and dresses with flounce and an extra dose of volume are forever a mainstay. This season, the designer duo focused on the contrasts and the in-between of "purity and sex." Here's everything you need to know about the collection.

One of the main textiles of the collection was tweed. A prim and proper skirt suit opened the show, but Brock Collection also offered a decidedly punkish, modern take on tweed with a floor-length tweed dress with buttons that opened at the knee. Styled with flat black leather boots, the ladylike fabric was, in a sense, transformed.

The majority of all the looks were cinched with belts of different thickness and styles. Worn over gowns and even over tweed blazers that were styled over little strapless dresses, belts became a very easy way for the label to add a different kind of silhouette – one that is classically in the frame of an hourglass.

Given romance is built in the DNA of Brock Collection, it's no surprise that many of these pieces could easily be transformed into an upcoming Valentine's day outfit. Towards the end, two of the most vibrant, scarlet red dresses made their debut; a striking display compelling enough to make even the color adverse commit.

Likewise, two golden brocade outfits took center stage and almost glowed as the models wore them down the runway. One top and skirt combo was grounded by a long black cardigan. Another elegant gown was, of course, stylishly belted with black accent fabric.

Since NYFW kicked off earlier this week, we've been seeing a sort of revival of Victorian style. Palomo Spain styled multiple models in ruffs (Victorian era ruffle collars) and Brock did too. A floral patterned one closed the collection, but there were also red and gold ruffs throughout the collection.