Sleigh bells are jingling, carolers are caroling, but for all of you stage door scrooges out there who just can't get into the holiday sprit, Halloween has been held over at Broadway's Eugene O'Neil Theatre. There, the thrillingly creepy new revival of Sweeney Todd, Stephen Sondheim's grand guignol-inspired musical fable of murder and revenge, close shaves and cannibalism is curdling blood and chilling spines nightly. Leading man Michael Cerveris literally has his hands full as the murderous barber of Fleet Street: In addition to the usual acting, singing and throat slitting, his Sweeney is also called upon to play guitar and glockenspiel, among other instruments, in this groundbreaking production, in which the actors double as musicians. "I love doing it," Cerveris told us over the phone the other day, "because it's so demanding and challenging, but we're totally in it together so it makes for a really close-knit bunch."

Cerveris's last Broadway outing was a Tony-winning turn as another Sondheim-singing killer, John Wilkes Boothe, in Assassins, but landing the plumb part of Sweeney owed less to the Sondheim connection, he says, than to an early morning breakfast meeting at the Royalton with innovative English director John Doyle. "Even though I wasn't having to sing or read any material, just that I had to be awake that early made it the most difficult audition I've ever had" he recalls, laughing. The coffee must have been strong, though, because all ended well, obviously. "We just connected right out of the box. By the end of the meeting I thought 'I really hope I get to do this. And even if I don't, I can't wait to see it.'"

Cerveris debuted on the Great White Way in 1993 as the lead in The Who's Tommy, which earned him his first Tony nomination. In 1997, he took over the lead role in Hedwig and the Angry Inch from John Cameron Mitchell off-Broadway and then in London and LA. But his long theatrical resume wasn't the only thing that impressed Dyole; for all along he's led a parallel life as a rock 'n' roll singer/songwriter/guitarist. In addition to fronting the London-based band Retriever, he's toured with Bob Mould, and last year put out his own album of folk-tinged alt/rock tunes featuring what he jokingly calls "a sort of pastiche indie supergroup," which included folks like Norman Thomas of Teenage Fanclub, Corin Tucker of Sleater-Kinney, and Steve Shelley of Sonic Youth. "I came out of real indie, alternative land" Cerveris reveals. "Personally my tastes were always that, and the bands I had were always that." But his multiple musical personality, he admits, can disorient his Broadway fans at times. "I try to make clear to people that if they think they're buying an record of show tunes they're going to be really disappointed," he laughs.

The mistrust can go both ways, says Cerveris, who also must contend with footlight-phobic friends in the rock world. But many of his rocker buddies are more open-minded. Explains Cerveris, "The wildest thing is that I've had the distinct pleasure of having people like Bob Mould and his partner, and Frank Black and Joey Santiago from the Pixies coming to see me in shows, and they love it." And it turns out that Roddy Woomble, lead singer of Idlewild, is a Rogers and Hammerstein fan, though he tends to keep it to himself. "He doesn't talk about it in the NME, but he loves musicals, especially classic old musicals" swears Cerveris. Broadway Baby is not as shocked by this news as some of you may imagine since we often listen to these bands ourselves when we're not singing along in the shower to "Somewhere" or "Rose's Turn," of course.

"It's not really that surprising" Cerveris opines, songwriters like good songwriting, and it's usually not actually the musicians who have these artificial divisions between genres and styles. It tends to be critics or music industry label people. I think fans, too, are a lot more open-minded than they're given credit for." And if there's one show that'll bridge the musical divide, we venture, it's Sweeney Todd, which is totally punk if you ask BB's humble opinion -- and Cerveris agrees. "I keep telling my friends that this is the Broadway show for people who think they hate Broadway shows. And they come and they love it and they totally get it." Hear that, hipsters?

We can't help but wonder which way Cerveris would hang, so to speak, if forced to choose between his two wacky worlds. "If I had to choose I probably would say music just because acting for me is really hard work," he says. "I'm not on of those guys who just loves to act and can't wait for the next chance to be on stage." When it comes to his music, on the other hand, "Because I'm not worried about how many records I sell I can make exactly the kind of record I want, so it's just fun for me. If I were actually doing it as a living, I might feel less like it was just a lark. But the cool thing is that I seem to be able to finance my money-losing music career with my day job being on Broadway, which doesn't really suck." 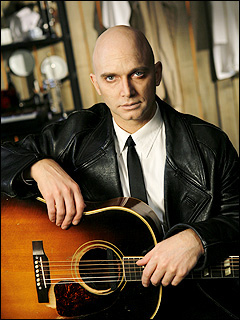 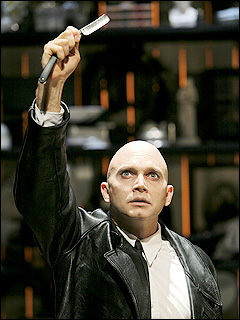