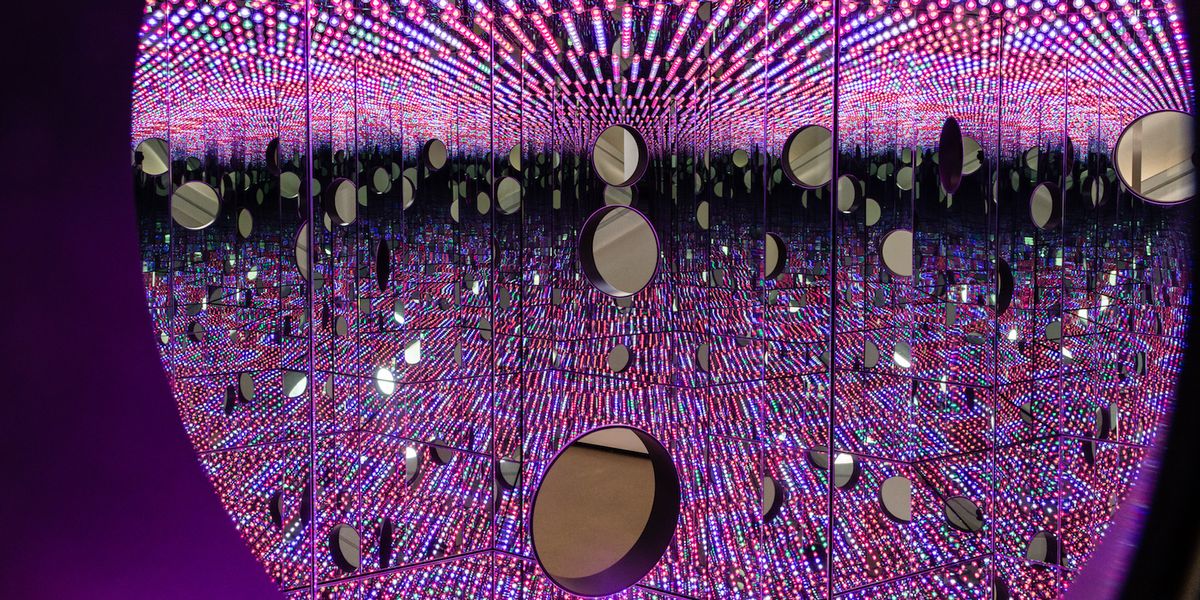 Let the Broad Museum Transport You to Another World

Once inside the concrete vault of The Broad, you will find three lines. One is a line for a line. All three are for Yayoi Kusama's Infinity Mirror Rooms, two of which are currently on view as part of the museum's rotating permanent collection. Upstairs, Roy Lichtenstein's grayscale Mirror#1 (1969) hangs without a beholder, his Ben-Day dots echoing Kusama's trademark polka dots. Down the hall, you can be absolutely alone with Andy Warhol's Twenty Jackies (1964), whose repetition of the former first lady's face anticipates the effect that Kusama's rooms will have on your own. In fact, Kusama, born in 1929, was an active part of the pop-art movement in the 1960s, and yet her Mirror Rooms have ushered her longstanding career into the 21st century, drawing crowds with the promise of an intimate, immersive experience and, perhaps more compellingly, an immersive selfie.

The first two lines in the lobby (eventually) lead to Infinity Mirrored Room-The Souls of Millions of Light Years Away (2013). Approaching the room, you will inevitably sneak a peek of the lights when the door opens and closes for the people in front of you. This build-up, waiting for and then glimpsing what one will only be able to stand in for 45 seconds, is inherent to the experience of seeing Kusama's Mirror Rooms. Monitored and private, the room leaks into the gallery space, and into the air.

Related | Under The Influence: Jess Williamson

Once inside (for the ideal experience, try to detach from your group and go in alone), you will face yourself in a dark glass box in which multicolored bulbs on wires seem to replicate around you, as if the "souls of millions" are orbiting your stationary body. Look into the corners and the multiple angles of your body appear to orbit you. Look down and, while the title connotes a galaxy, you will feel transported above a city — the lights of which (cars, billboards, buildings) you have somehow left behind.

The Broad on Instagram: “Some #mondaymotivation featuring 📸 @tommylundberg, 🎨 #YayoiKusama and 🎶 @giraffage. Have you seen Yayoi Kusama’s Longing for Eternity,…”

While Kusama's rooms can symbolize the mirrored fishbowl of the 21st century, they paradoxically allow you to escape the present moment. The intermittent dimming of the lights allows for its own "recurring wave of arrival," to use John Ashbery's phrase, causing your presence to flicker. The room is as much an opportunity to self-erase as it is to self-create. While that may not stop you from taking a selfie, Kusama's interest in repetition dovetails nicely with our desire to capture the experience, reinforcing the image of our image in the mirror.

Upstairs, one walks through the Lichtenstein gallery to find the third of these lines for Longing for Eternity (2017), which could be a pun on the wait time. Unlike Infinity Mirrored Room, Longing for Eternity is not actually a room, at least not one you can walk inside. Instead, place your head in one of the three portholes cut into its mirrored box and you will see a hall of round mirrors in which only your face is reflected. Meanwhile,the carnival-like lights change from red to blue to green, leaving a hexagonal pattern on the floor when the colors assimilate. Without the romance of Infinity Mirrored Room, Longing for Eternity is more playful and wry. Like the galleries of pop art that surround it,the piece, refracting your face across mirrors that evoke Lichtensteinian speech bubbles, has a comedic effect. But the elliptical nature of both rooms, divorcing the human form from its recognizable surroundings, will leave their mark on you long after your time is up.