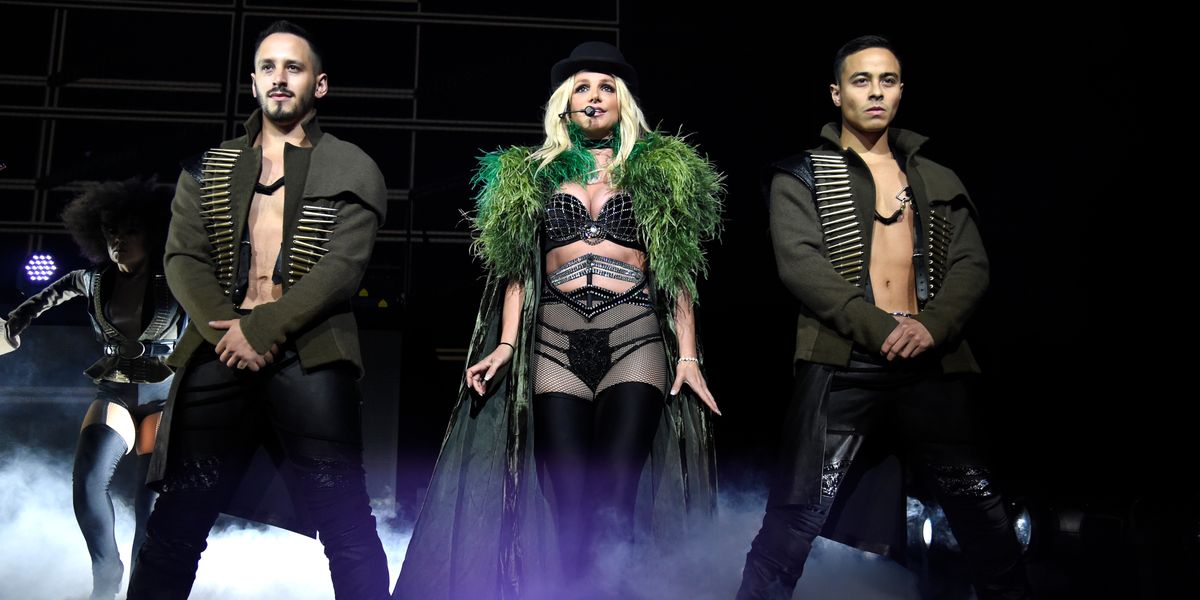 Britney Spears Offers One Final 'Piece' of Herself

By now, Britney Spears fans — the Britney Army, Britney's Bitches, the Spearleaders, however you choose to self-identify — already know how this show works, bitch.

It's been almost five years now since the 36-year-old pop icon's Piece Of Me residency first debuted in Las Vegas. And in that time, as the Strip's become stuffed with scores of fellow pop divas staging their own shows, the production's largely stayed the same, apart from a few key set list switch-ups, an alternate opening, mermaid hair, impromptu live performances of Bonnie Raitt's "Something to Talk About," wardrobe malfunctions and live outbursts aplenty.

Following a tour of Asia last summer (she finally did sneak away to the Philippines), Britney's taking her Vegas show out on the road again — ...one more time, if you will — with the Limited U.S. East Coast and European Leg of what is, allegedly, the show's final run. (The whispers of a brand new Vegas residency, set to kick off in 2019, are not so much whispers as they are screams at this point — we're basically just awaiting the announcement date).

Seeing the whole show fit snugly inside of the intimate Event Center at the Borgata Hotel Casino & Spa on Saturday night (July 21) underscored just how tight the production has become: in its final state, Piece of Me has never been so true to its name.

It is, truthfully, just a piece of the full-scale Vegas show; a largely stripped-down staging featuring her long-running crew of talented dancers, a tiny band, laser lights and the Living Legend herself.

Everything about the show's been cinched — including the wardrobe, pared down to almost exclusively an array of strappy, skimpy swimsuits and a crop top plucked from her own closet, which she recently modeled in a photo shoot in her backyard.

Speaking of cinched, there's also the hair. Let's talk about ponyography: exactly one song deep into the set, Brit whips it up into a ponytail. She fixates on it for the duration of the show, adjusting it several times per song to the point where it takes over for choreography. Is a stylist unwilling to fashion her a more durable pony, or rebellion? The world may never know.

Most of the props that added to the spectacle in Vegas didn't make it on the road. (There's a massive tree-sized hole in the opening of "Toxic," most glaringly.) Two songs get the axe as a result: her signature In The Zone ballad "Everytime," which required a giant pair of angel wings to float from the rafters, and "I Love Rock 'N' Roll," performed while writhing on a giant guitar.

At moments, Brit boldly performs like the props are there, anyway: during "Do You Wanna Come Over," she repeatedly latches on to a pole overhead that... doesn't exist. (Just use your imagination).

Britney Spears on Instagram: “It always amazes me how different your body looks and feels when learning new moves and creating your own routines! Doing the same things…”

To fill out the gaps, B-Girl added two tracks from her most recent release: "Change Your Mind (No Seas Cortes)," a Glory fan favorite (and shoulda-been-single), and "Clumsy," a more polarizing pick.

Unsurprisingly, B's at her best with the new stuff. She craves new material to perform — as she bluntly revealed in a recent rehearsal video — so she particularly comes alive when the Glory section arrives about midway in.

That's where the newness starts and ends, though: for fellow stans who've shelled out their life savings to see this show over a dozen times in Vegas or trolled the #PieceOfMe hashtag nightly: apart from those two tracks — and a brief, jarring sample of Migos' "Walk It Talk It" tossed into the middle of "I'm A Slave 4 U" for 30 seconds — there's nothing you haven't seen before. The show's arc remains the same as when it launched years ago, and expectations should be set accordingly.

Fans are so familiar with the flow at this point that one is now going viral: as Britney prepared to launch into "Gimme More" at the same venue two days before, kicking off with her iconic "It's Britney, bitch," one fan masterfully delivered a yelp of "WHO IS IT?!" at just the right moment. It was so good, even Britney broke out into a giggle.

Zachary Gordon on Instagram: “I can now be known as the guy in the crowd that made Britney laugh. 😂❤️😍 #BritneySpears #PieceOfMeTour #BritneyPieceOfMe #PieceOfMe…”

If you follow her on Instagram, you've seen a fair amount of this show, as well — even down to "Change Your Mind (No Seas Cortes)," features the same choreography she's been flaunting from her home gym since April. There should be no illusion that this is a huge or inventive production. It's her most stripped-down stage show since The M+M's Tour, honestly.

But the good news is that Britney is looking happier, healthier and hotter (than ice) than ever, and Piece Of Me — which has always been fun in every iteration — is still a blast. If you're a fan to any degree, you'll absolutely enjoy yourself. And based on the excitable chatter from first-timers pouring out of the venue, merrily sing-songing "...Baby One More Time" and lining up for tees at the merch stand, Britney delivered exactly the show they came to see.

From what we're allowed in to see from her social presence, Britney appears to be living her best life offstage. She's already given so much of herself after over two decades in the entertainment industry that even supplying a piece of her at this stage in the game seems, honestly, generous.

It's the pure pop joy of the music plucked from her hit-filled Spearitual discography — an eclectic array of remixes of nostalgic classics, unexpected-but-amazing deep cuts (reminder: "Breathe On Me" and "Touch Of My Hand" are still being performed in 2018), pop culture nods (a Missy Elliott dance break) and personal picks from her most recent album — and the sweet-hearted, sexy-yet-silly Living Legend hair-flipping and arm-signaling at the heart of the show which makes the Piece Of Me experience worthwhile again and again.

And being the unpredictable enigma that she is, no show is ever truly the same when it comes to her few, personal interactions with the crowd.

"This place reminds me of Louisiana! Are you guys ready to break the ice?" she gleefully announced before launching to the Blackout single early into the night.

Was that shade, or simply meant in earnest? As with all things Britney, there are only more questions than answers, forever leaving us wanting more (moah).

We keep on dancing till the world ends, anyway.