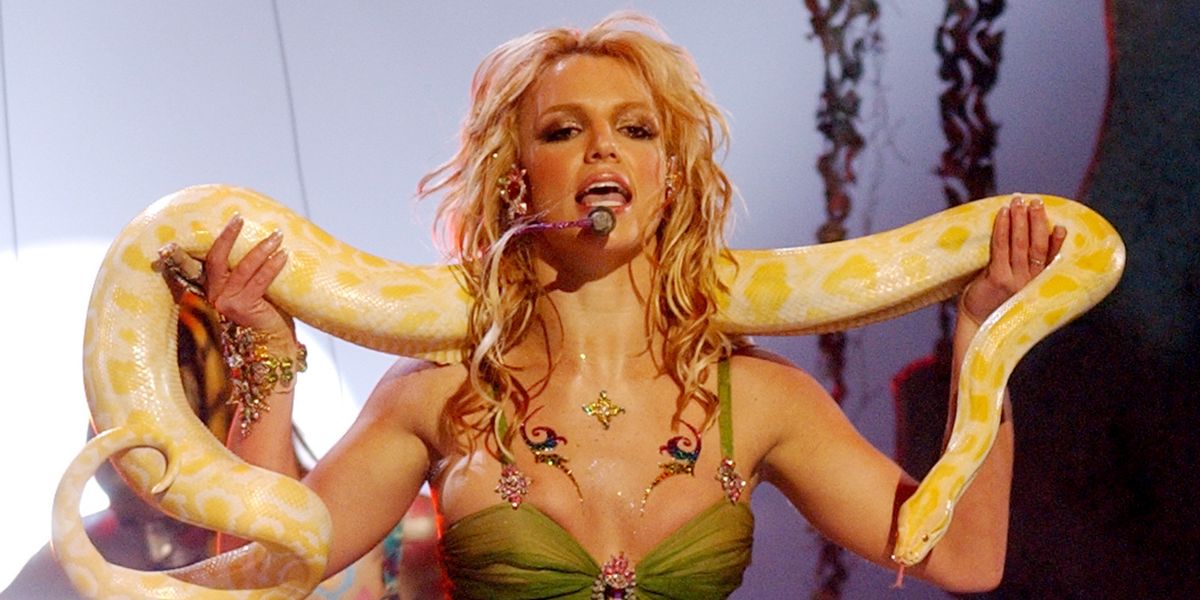 When I say "Britney on Broadway" you probably a performance that would look a lot like her Vegas residency, except the narrative tale of a young pop princess' rise to overnight stardom, taking us through the different elaborately costumed eras of Britney, the crushing pressures of fame and beauty, the melt downs, the love affairs, and her ultimate phoenix-like transformation into a peppy Instagram spectacle. Fabulous costumes, glitter, snakes, latex, back-up dancers, the works.

Nope. The first time the theatrical drama of Britney Spears' catalogue will be brought to the stage will be as the soundtrack to a feminist anti-fairytale that has nothing to do with Britney Spears. Chicago theatre owner James Nederlander, according to The New York Times, announced today that he is producing a musical to the tunes of Britney titled "Once Upon a One More Time."

"Once Upon a One More Time," according to the Times follows a women's book group of disenchanted Disney princesses including Snow White, Cinderella, Rapunzel and Sleeping Beauty who spend their days reading Grimm's fairy tales. After they wish for something more interesting, a fairy godmother delivers a few copies of Betty Friedan's second wave feminist manifesto The Feminine Mystique. Like the unhappy suburban housewives Betty Friedan originally wrote it for, "their lives are altered in unexpected ways."

Britney Spears on Instagram: “Pink has always been my favorite color 💞💞😜🎀🎀”

"Cinderella is having an existential crisis" screenwriter Jon Hartmere told The Times. "And she has a posse of famous princesses, and her stepmother is the main antagonist, and there's also Prince Charming and a dwarf we've never met — the eighth dwarf — and a narrator who is unhappy his system is being dismantled before his eyes."

He continued: "These women have been in this hermetically sealed world, and then they start to get deeper into modern ideas — second and third-wave feminism — and also explore how stories are passed down to us, and where we get our norms from. But it's also superfun and funny."

Oh. Boy. On one hand, the raw pop cultural subject matter of Britney Spears, Betty Friedan and the Disney princesses mushed together into a one narrative could be utterly fascinating and hilarious. Cinderella turning "Oops!... I Did It Again" into a feminist protest anthem definitely has potential to be subversive. On the other, the whole "upending fairytale tropes" and "this princess doesn't need saving!" thing has been fairly done to death on the stage and the screen in recent years (Frozen, Snow White & The Huntsman, Stardust, Enchanted, the 27 forthcoming live action remakes of Disney movies). Reconciling all the flaws and contradictions of second wave feminism and avoiding the most cliché "strong, independent woman" subversions Disney's archaic contours, all while Snow White and Rapunzel do duet choreography to "Womanizer" while keeping it "superfun and funny" is certainly a daunting task. But on the other hand, could be brilliant???

Jon Hartmere, the writer behind The Upside (interracial buddy comedy starring Kevin Hart and Bryan Cranston) and rock musical "Bare" about gay christian teens, wrote the screenplay. Kristin Hanggi ("Rock of Ages") will direct and Keone & Mari Madrid (Justin Bieber's "Love Yourself" music video, World Of Dance) will create the choreography to musical's 23 songs from Britney's catalogue, which include "a couple of deep album cuts" plus all the hits.

We're extremely excited to find out if they can pull it off. "Once Upon a One More Time" will open for the public on Nov. 13, and to run until Dec. 1 at the James M. Nederlander Theater in Chicago, with hopes of transferring to Broadway after it's first run.