Friendly Fires lead singer Ed Macfarlane has a way with words. Near the end of the set their second night in New York at The Music Hall of Williamsburg, my favorite frontman mesmerized the entire room with a few simple sentences: “Every time I keep coming back to New York, I keep having a better time. I’ll be honest with you, the first time I came here, I didn’t get New York. But now I get fucking New York! Now I get New York.” The audience ate it up, staring up in awe and cheering the entire time. His sincere delivery and humble demeanor make him more than just another British pop-synth sensation, though he is that too.

Of the two, the latter performance proved more impressive. I wouldn’t go so far as to turn my nose up at LPR, but the venue’s super low stage makes it tough for midgets like me to see. Also, in terms of timing, the UK kids didn’t get going until well after midnight. The group I was with spent ample time mingling at the bar, imbibing overpriced cocktails and shuddering at the sounds emerging from the opening band. The quality catch-up was stellar, but, seeing as it was a school night, might have been nice to head home before 1 a.m. Call me old fashioned. Night numero dos simply yielded a calmer, less stressful experience, complete with space to breathe and a sweat-free spot from which to watch.

Both evenings featured something new, something special: live wind instruments, including a saxophonist and a trumpet player. Also adding texture intermittently was the inclusion of familiar supporting instruments -- maracas, cowbells and tambourines. Like the last time the blokes were in town, two drummers (permanent member Jack Savidge and live-only addition Rob Lee) manned percussion parts while sexy guitarist Edd Gibson plodded around and head-banged in time to the beat. Multi-talented Lee also rocked bass guitar. Main attraction Macfarlane garnered the most attention, with his charismatic way with a mic, velvety vocals and dance moves to swoon for. His finger-snap-sole-stomping and exaggerated-but-unnervingly-natural gestures were difficult to turn away from. Face it, the dude has endless energy. Guy or girl, straight or gay, every person in the place would have to be out of their right mind not to want his limber body grinding up against their own. Am I right?

Unlike their Bowery Ballroom consecutive co-headlining nights with fellow Brit band White Lies earlier this year, in this instance Macfarlane forwent slippers (perfect for tiptoe twirls) for “real” shoes. In fact, said frontman looked like he stepped straight off the pages of Brooks Brothers’ resort fashion catalogue, what with his signature style of rolled, fitted chinos and collared top, with rolled sleeves to match. And, despite more restrictive footwear, hottie had no trouble maneuvering his bodacious bod all over the place, sidestepping with arms in the air and rotating his rump to great effect. Perhaps most perspiration-producing was “In the Hospital,” an aerobics class mix-tape must-have.

While the former performance was wilder in some senses (wasted diehards were practically pummeling our main man and several threw their panties onstage) their Brooklyn show featured its fair share of absurd fan behavior -- from the mid-50s male-with-a-ponytail air-drumming in time to “Jump in the Pool” to the mid-20s trippin’-balls lady storming the stage during “Paris” and dancing like a lunatic till“security” (AKA FF’s roadies) carried her off. Yes, psycho made her way up and the polite (and preoccupied) band members let her roam for a short while. She grabbed Macfarlane’s midsection and, when he eventually concluded enough was enough, it took all his might to try to unclasp himself from her grasp. She clenched onto his legs for dear life and the scene she caused could have easily escalated, throwing off a lesser act. But, alas, FF surmounted the attack and fought back by playing on, professional and poised.

Before embarking on their last track, “Ex Lover,” Macfarlane confessed feeling guilty for finally ejecting his stalker from the stage; “I feel bad for kicking that girl offstage.” Following this he invited everyone onstage for the encore, this single song. “If you want to dance onstage” led to at least 15 attendees making their way up, some strictly bustin’ textbook moves, others mimicking Savidge and his hard-to-keep-up-with-hitting. Macfarlane traded places, shimmying with people in the pit and causing quite the commotion. Stalker Girl, as I have aptly renamed her, snuck up once again and, at one point, planted a wet one on his lips, much to Macfarlane’s dismay. Must admit, I hardly blame her.

The cheering at the end didn’t dissipate as Macfarlane made closing remarks. “Thank you very much! I liked it when I was in the crowd and you were onstage. That was my favorite bit of the set.” Hoots and hollers continued. Most moving, though, had to be his pre-encore “confession,” alluded to above. We get you too, Ed!

Also of note was their inclusion of a newbie not on their year-old self-titled record Friendly Fires (XL Recordings, September 2008), a number called “Kiss of Life.” The percussion-heavy, escalating, tribal ballad enthralled, captivating our ears as we tried to pinpoint the exact chorus. Check out the vibrant video here. And, fear not, now that Macfarlane and co. “get New York," expect their third return in 2009 come Saturday December 5th at my home-away-from-home, Webster Hall. Tickets go on sale this Friday at noon. 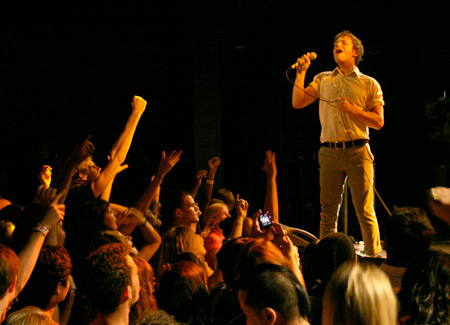 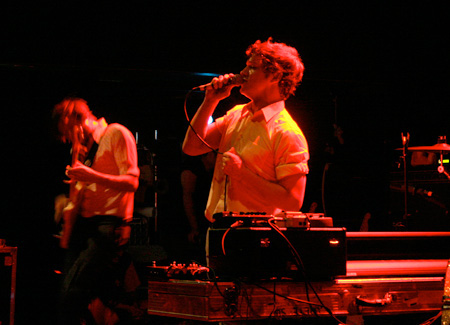 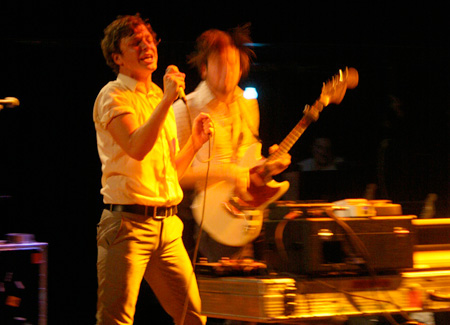 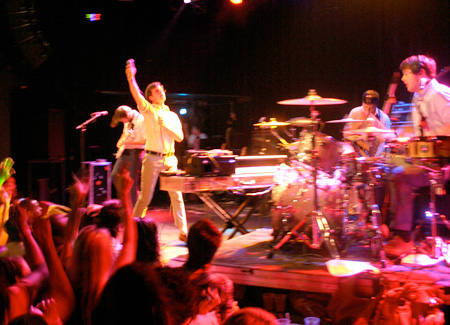 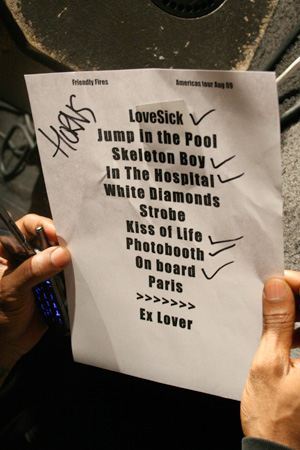 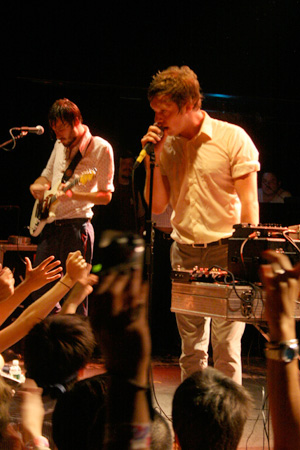 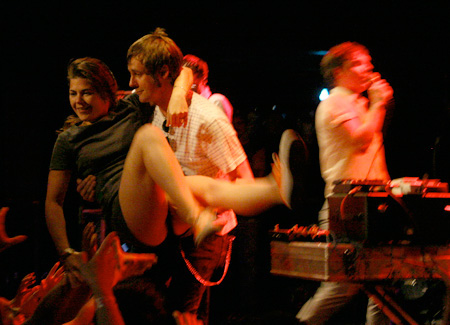 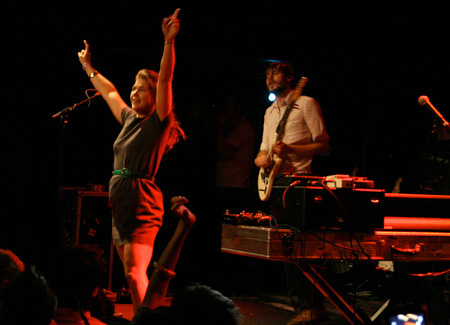