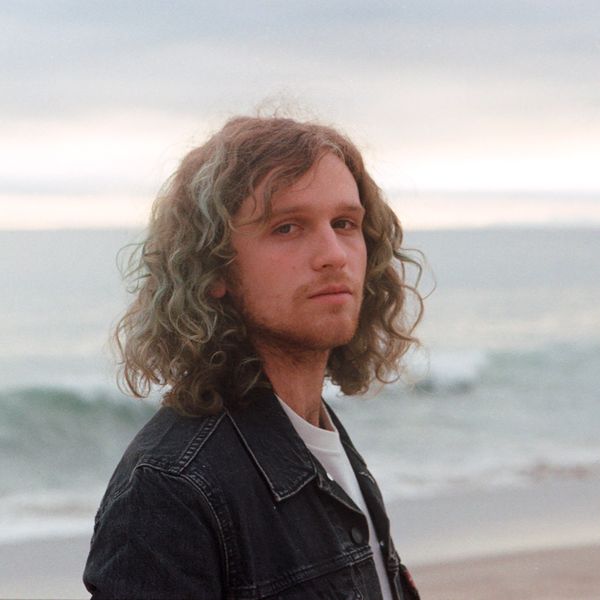 The first riffs of Nashville alt-folk artist Briston Maroney's 2019 EP, Indiana, emit a mixture of absolute tension and mounting significance. "And halfway home, you caught me at the station/ Struck me up with quiet conversation/ It'd been months since you had set me free," he spits out over a quick guitar that nearly backs each syllable. Already, there's a sense of urgency, something pushing his words forward beyond just a building instrumentation. Then, release; "But, girl, you better act your age!" he sings out full-chested, accompanied now by the smash of a drum kicking into each beat.

Maroney, now 21, has been navigating the Nashville music scene for a while and has been able to catapult himself beyond state lines. When I call him up for our interview, he's in London on tour with fellow rock act Wallows, playing show after show. Touring is shiny and new for him, but his storied music carries the weight of years of experiences; I imagine the performance of each song off his new EP to condense playing a new venue into a cloud of familiarity, as if he were doing a live reading from a beloved book that the crowd had read many times before.

This is because Indiana is the culmination of uncertainty, a lingering feeling that, to almost everyone, feels as old as consciousness. "Fool's Gold," a song off the EP that PAPER is exclusively premiering the music video for, is an ebb and flow of emotion that represents this best, both very literally — "Everything is black and white/ I don't know where I went wrong" — and proverbially. In the video, Maroney encounters a shock wave of some unseen force inside of a flower shop, slow dancing between stuns and caressing the merchandise. Each pierce of eye contact Maroney makes with the camera evokes a sense that he has more to say. His music is about a stream of uncertainties, stories, wants, needs, and desires, all connecting and never really circling back, save for structural foundations of songs like choruses and verses.

In addition to releasing the video for "Fool's Gold," Briston Maroney is excited to announce his first headlining tour exclusively through PAPER. The tour takes him, once again, far from Nashville. Maroney will visit states across the country, and also return to tour around Europe. Read his full interview with PAPER below to find out his reaction to getting added to Taylor Swift's Apple Music "ME!" playlist, how he wrote his new EP, and the story behind his EP's vivid cover art.

I really fell in love with the Indiana EP. I found it on Apple Music just randomly. Do you find that people find your music that way?

Honestly, I'm pretty out of touch with how people are finding my music. Spotify's been what I've looked at the most, I think people have been checking it out. It's seemed to be pretty random, which is awesome. It's pretty organic, which is really, really cool. Nothing more you could ask for than for people to just stumble on it and build their own idea about it and connection to it.

Everyone gets a piece of the pie when you find it. It's the rush of finding something new and exciting. You also got included on Taylor Swift's "ME!" playlist, which is crazy. I was like, "What?"

Yeah, that was insane. That was like the craziest thing that ever happened. I didn't particularly fantasize about that specifically happening, but this idea of someone of a very high profile or high acclaim just seeing the music... It was something that you'd expect to have a really impactful feeling on you when it happens, but it was more like that I woke up and saw that it was on the playlist, and I was more just like, "What the hell is going on?" It was awesome. It was cool to think that if someone of that level of attention is still able to find this record organically, then it's something I can't control from happening and it's really positive. I'm super thankful for it.

In Nashville, I'm assuming you never crossed paths with her musically, or at least, yet?

Not musically. I'm sure we've eaten at the same restaurant or something. Maybe I served her manager or something when I was a waiter, but I don't think I've ever actually seen her around.

"I never really wanted to sing, but I started writing songs. Then, I realized that it's pretty dang fun."

Are you still very much involved in the Nashville scene, or has touring kind of taken you out of it?

Logistically, we've definitely been far from home. The past four months, I think we've been home for 10 days total, or something crazy like that. As far as just loving Nashville and feeling very connected to it as home, definitely still feel that. I'm sure there's a hundred new bands that have popped up since I've been in town last.

What about the scene helped you thrive as a musician?

I think the opportunity. Coming from Knoxville, there was always stuff to do, but not always shows to play. There weren't as many opportunities to meet people my age or people in the scene I wanted to be in, but with Nashville, it's every night of the week, every part of town, there's an opportunity to meet another kid who's like minded to you. So yeah, just how frequently we were allowed to play was super helpful.

Do you think that comes out of a practice thing? Were you in bands before you started this project?

I was always playing, typically solo. I played guitar for a few people here and there, but mostly — sorry, they just brought in our fruit tray — getting to play so frequently was great for just developing an identity and sound, and learning how to put up with a lot of shit, honestly. Learning how to put up with crazy circumstances from playing shows and how to make the best of a night. I think that was the biggest lesson I learned. I was always playing music. I played guitar and bass for multiple friends throughout my time in Nashville.

Is that how you started playing when you were younger?

You never really saw yourself ending up as the singer, more just playing?

I think I was the only kid in our circle when I was younger that was writing songs, really. I didn't have a whole lot of friends that were interested in that. A lot of friends played instruments, but not as many people were interested in singing or writing. It came kind of out of necessity. If I was in a room with other kids to play music, I was the only one who typically had songs or wanted to sing songs, even though I didn't really want to sing songs.

To talk about the writing, a lot of it is superbly narrative-driven. Where does that come from, all of the very structured narratives within the songs? They're very blues-y and pretty clear.

Thank you for listening intently enough to have that opinion, it's very kind. I think it came out of, around my teenage years, just getting into finding songwriters who were really good. Going from listening to indie music songs and wanting to write songs that were simple and fun to finding John Prine and Jim Croce, a lot of classic artists whose songs are just kicking my ass, you know? Here I am just thinking it's cool to say the same word a hundred times in a song. Basically, just discovering music that was: "Man, in two minutes, they can tell a story that I can expand in my mind for years to come." That was around the time it took a turn.

What's the story behind Indiana? I was curious as to the title, because have you ever actually lived in the state?

Not even close. The album cover is a picture of my girlfriend's little sister. The outfit that she's wearing, the little cowgirl outfit, my girlfriend had one just like that when she was her sister's age. Her sister in this photo is basically wanting to be Gracie, my girlfriend. She wanted to emulate this person she looks up to. When Gracie was born, her parents wanted to name her Indiana, but things happened in their life and they ended up naming her Grace. She went through her whole life wishing she'd been named Indiana, so I like the idea of Gracie wishing so badly that she was one thing, but her little sister wishing so bad that she could be Gracie. It's just the idea of never realizing that what you've got is exactly what you need. It had nothing to do with the state, I know nothing about the state of Indiana.

That's the best backstory I could've asked for, honestly. If you were like, "Yeah, I lived in Indiana for a year," I would've been like, "Oh, okay."

"I've always been fascinated with bands that have the unspoken frustration. It's more powerful than just playing minor chords and saying you're sad."

Besides that, is there a theme that connects the songs on this EP? I can construct my own, but I wanted to hear from you.

It's hard to say. I think, sonically, the overall vibe of every recording is from the same world. They were all written around the same time when I was just feeling very, uh, like I had no idea what was going on at all. I felt like a little kid. How did you interpret it, if you don't mind me asking?

When I first listened to it, I got a sonically muffled feeling. Not in a bad way, but in an easy-to-listen-to, very-poetic way. It was really clearly constructed and chronological. It's like if I wrote a story out and sang it to some great instrumentation. "Small Talk," for me, is an eruption at the beginning. I love a big beginning and I love a downtempo ending. All of that being said, I interpreted the theme as being an undercurrent of melancholy, rather than something hyper-melancholy.

Sure. Absolutely. I've always been fascinated with bands and records that have the unspoken frustration, or the melancholy you're talking about. It's so much more powerful than just playing minor chords and saying that you're sad. With all of these songs, they're all major key and happy sounding. If you took the lyrics out, I think the music would all be pretty docile. Just taking that feeling of not really having a choice, but to act like things are cool. I don't know if tongue-in-cheek is the right way to say it, but just inferring that there's a lot more going on than what is at hand. It's a very human thing that everyone feels, but they don't always bring light to it.

You're right, because a lot of the songs don't connect to each other very plainly. A lot of the times, if you see a pop record, you'll see a song titled, "I Love Him Now," or "Now He's Left Me," and you know what they're about before you listen. "Small Talk," "Caroline," "Fool's Gold," and "St. Augustine," none of those have prior connotations.

It's definitely a constant thing that I wish I could turn off. It drives me literally insane. I literally can finish a song or feel thankful about it and feel accomplished for having it happen, and then thirty minutes later be like, "Well, that is over. No use living in the past!" But yeah, there's always stuff going on. A lot of it is super bad and I'm glad no one will ever hear that, but yes, definitely constantly working on stuff.