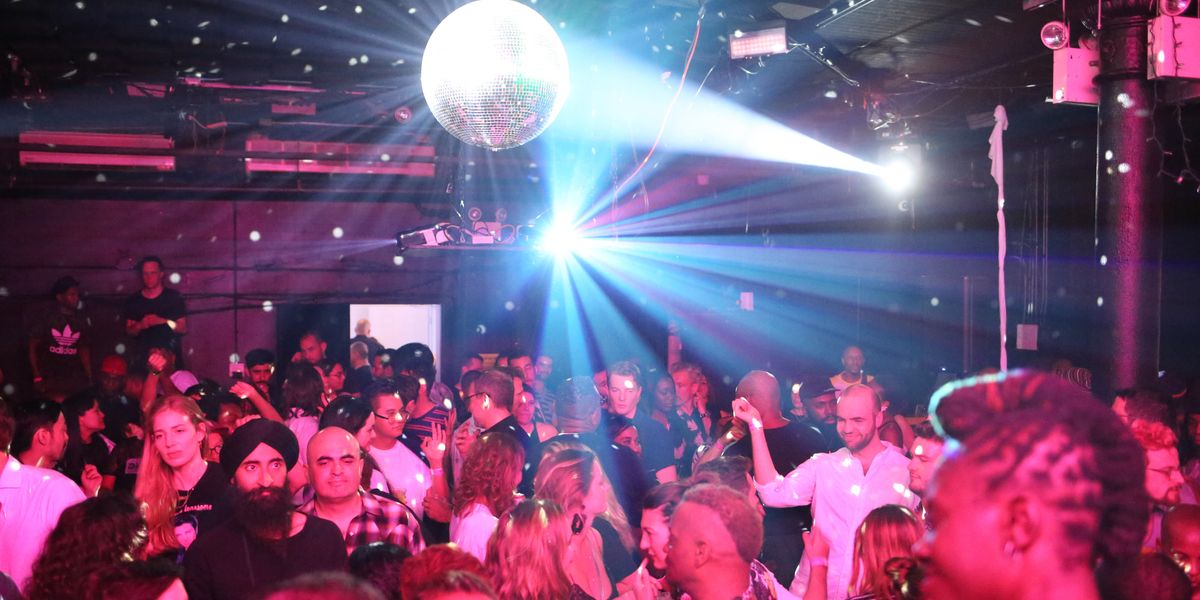 Last weekend marked the inauguration of Bring Down the Walls, a month-long project in NYC that couples conversations and workshops centered on the U.S. Prison Industrial Complex (PIC) with a seemingly disparate partner: a nightclub. But club kids of all eras understand, of course, that dance floors aren't always just about dancing. These spaces have historically been platforms for liberation and empowerment for the people who need it most, and the club element of Bring Down the Walls most certainly offers the same kind of meaningful experience.

Every Saturday afternoon throughout May, the School for Radical Thought, led by human rights and justice advocates representing various organizations, opens at Firehouse, Engine Company 31 in Manhattan. When the lights go down at 10 p.m. — and they stay down until 6 a.m. — collectives like Papi Juice or Brujas take over. This weekend, the club also becomes a ball when MikeQ brings his House of Vogue party and Qween Beat Records members.

The project, conceptualized by artist Phil Collins, operates in conjunction with Creative Time, the public art organization best known for the 9/11 memorial Tribute in Light, and The Fortune Society, which for decades has advocated for people with incarceration histories through employment services, healthcare, education, and more. Beyond the school and club, the project also includes an album, featuring electronic musicians like Empress Of and MikeQ collaborating with formerly incarcerated vocalists on covers of beloved house classics. Proceeds are benefiting the New York chapter of the national grassroots organization Critical Resistance, which seeks to eliminate the PIC altogether.

Creative Time Acting Executive Director Alyssa Nitchun says the seeds of Bring Down the Walls were sown a few years ago while Collins spent time at a correctional facility with incarcerated men.

"We had a conversation with him and he basically was like, 'I'm interested in doing a project that explores the notions of freedom,'" Nitchun says. "And in the sense that the United States theoretically bills itself as the most free nation in the world and, in fact, has the highest rates of incarceration. And obviously, our prison systems, our quote-unquote criminal justice system, has iterated out and been duplicated around the world."

The residency began there, with Collins and the men playing and creating music together for several years. "At some point along the way, house music was something that they very much bonded over," she says.

Some of the men who've since been released, she adds, are now involved in Bring Down the Walls; two have been on the advisory board and another is on the album.

Opening weekend was "really special," Nitchun says, with standing ovations in the daytime and, at night, a diversely packed dance floor.

If you can't make it out to Bring Down the Walls, check out the album on Bandcamp — not only "because it's a fucking epic album," Nitchun emphasizes, but of the organization it benefits.

"[Critical Resistance] is working to build an international movement to dismantle the prison industrial complex and so it's like the more downloads we can get, the more people can give whatever they have towards this, the more will go to the organization," she says. "So there really is a way for everybody to get involved."

Qween Beat on Instagram: “This Saturday WE’RE having a ball in collaboration with @creativetimenyc ! #BringingDownTheWalls ** FREE ADMISSION ** See link in bio or…”

PAPER also spoke with one of the vocalists featured on the album, Amanda Cruz, to learn more about her experience with Bring Down the Walls, from recording the cover of the iconic Chicago house track "Love Can't Turn Around," originally delivered in 1986 by the legendary Farley "Jackmaster" Funk with Daryl Pandy on vocals, to what it means to bring real experiences and critical conversations about the prison industrial complex to a public forum. Read the Q&A with Cruz below.

How did you get involved with Bring Down the Walls?

I got involved because of John Runowicz, who runs the monthly Music Cafe at The Fortune Society, where I've worked now for the past five years. The Music Cafe is an open mic series where you can express yourself by singing, telling a story, or reading a poem. I always chose to sing because that's been a passion of mine since I was a kid. One day John approached me and said, "I want to introduce you to the artist Phil Collins. He's auditioning formerly incarcerated singers for a public art project." He felt I was a great fit, so I auditioned and got the part! Music was something I always found solace in while incarcerated, so this project means a lot to me.

Can you tell me a little more about your background as a vocalist?

I've always had a passion for the arts. Anything that involves singing, dance, painting, but music is my true passion. Any opportunity I've had that allows me to sing, I've taken it.

My mom would play all kinds of house music in our home throughout my childhood, and I remember asking her "Where are the words? I want to sing!" and she would say, "House music is about the beat and rhythm." I learned to love the beats and sing, this was as early as six years old! As I got older, I learned more about the culture that grew up around house music. My cousin, who is openly gay, always participated in Voguing competitions.

Now in terms of the song I sing on the album, "Love Can't Turn Around," I connected with this song as an adult. I went through a lot with my first relationship. We had a lot of ups and downs, and no matter what happened I always wanted to stay with him. The song has a straightforward message about working through your hardship, and focusing on the love, and not turning your back on it. I realize now that love can actually turn around, because I am now in a happy relationship.

It was amazing. At first it was nerve racking because I didn't know what to expect, or what my music coach, Djore, expected from me. I learned so many new things: ad-libbing, how important breathing is, and how having a good attitude plays a huge part in the final product. It was amazing to hear myself on a track, because I've never had that opportunity. The first time I actually heard myself, I was so proud and in shock, it gave me the motivation and confidence to do it again in the future.

What does Bring Down the Walls mean to you?

Most people don't understand the complexities and injustices of the prison system. I spent a full year in Rikers Island before I even saw a judge. When I finally came home, I was scared. I didn't know what to expect in terms of reintegrating into my family and society. It's difficult. That's part of why this entire project means so much to me. It was so meaningful to work with such wonderful people like my music coach, Ian Isiah, MikeQ. Everyone was very sweet and patient with me. It was so touching to see everyone together at the Firehouse, working towards educating people on what actually happens inside prison walls. Hearing everyone listen to me and the other artists who were impacted by the system was uplifting. In the end, I hope that we can make these issues known, and change and impact others lives with our stories and our music.

Click here for the full Bring Down the Walls schedule. Entry is free, but advance registration is encouraged.