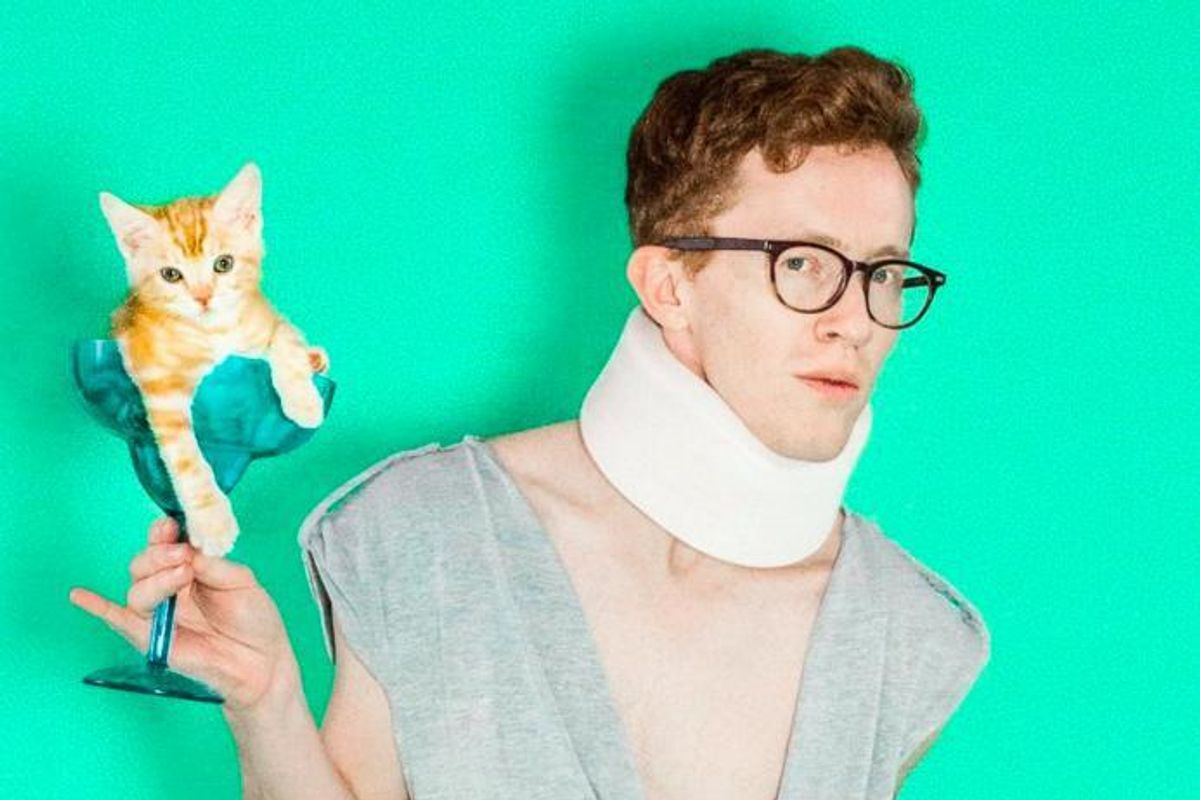 While the "golden era" of Twitter comedy has perhaps waned a bit, there are still some exceptions, like Bridger Winegar. The TV writer, who recently left Jimmy Kimmel to write for Unbreakable Kimmy Schmidt, has been keeping it fresh with his gloriously dark and haunting humor on Twitter, under the moniker @bridger_w, since 2009.

Take a good look. Memorize his face. This is the man who ruined my marriage pic.twitter.com/hMG9ES3eIY
— Bridger Winegar (@bridger_w) July 30, 2016

I want to go to a bank, ask about getting a small business loan, and then tell them I'm planning to open an orphanage
— Bridger Winegar (@bridger_w) July 15, 2016

Instead of getting mad when someone stops unexpectedly in front of me on the sidewalk, I just assume they want their shoulders rubbed
— Bridger Winegar (@bridger_w) July 13, 2016

I think the next time I come across a group of mean teens in public I'm just going to ask them to kill me and get it over with
— Bridger Winegar (@bridger_w) June 29, 2016

His tweets take on the painful subtleties of the trashcan we call life, ranging from his ongoing battle with an unseen volleyball team:

Attacked online and off by my volleyball team
— Bridger Winegar (@bridger_w) June 30, 2016

I want someone to scream this while holding me at gunpoint pic.twitter.com/umkxdCALBd
— Bridger Winegar (@bridger_w) June 28, 2016

All of these have solidified Bridger as one of the internet's funniest voices.

Also, his Instagram is a little slice of heaven:


Winegar got his start on the Late Late Show with Craig Ferguson as a production assistant, and found himself appearing in bits in front of the camera as well. He then went on to work as a staff writer forThe Jimmy Kimmel Show. Which brings us to 2016. Winegar recently made the move from Los Angeles to New York to write on season three of Netflix's Unbreakable Kimmy Schmidt, where, no doubt, his penchant for the darkly absurd will be well utilized.

He has come a long way from his days growing up in the Mormon church in Salt Lake City, to coming out as a gay man in Los Angeles, and now moving to the East Coast. His humor, however beautifully morbid or awkward, reflects the observant and humble introspection of a person who's come into his own.

We chatted with Bridger about the weird Internet communities, getting his break from Craig Ferguson, and why he feels like a human being for the first time in his life.

How did you start using the internet?

In middle school in like '97-'98, I would go on my Netscape browser, and I thought it was funny to create websites (Geocities, etc.) that no one ever visited. I pirated photoshop and elaborate graphics that—again—no one ever saw.

What were you posting?

Links to pictures I thought were funny, bizarre tips and advice. The graphics I'd create were often based around packages of cigarettes, old Virginia Slim packs. I don't think there was ever really a goal behind it. I just had fun doing it. I think if I were 13 now, I'd be on Tumblr creating weird things and posting links to annoying garbage. I pray those sites have been taken off the internet by now.

What are your favorite internet k-holes to go into now?

I love finding derelict homemade websites that haven't been maintained in years, with those lo-res images and broken links. I was one of the fourteen people who were active on Pinterest for a while—I used that to find the weirdest images. I think I have good luck finding great garbage.

My new favorite thing, though, is I'm obsessed with looking up Plymouth Prowlers—those retro-looking roadsters from the late '90s. There's a whole community based around them. I found this message board where one entire thread was a memorial thread dedicated to "Prowler owners who have passed on."

There are, like, three things that bring me joy in life these days, and one of them is the Plymouth Prowler Community.

When I interned on Letterman, it had just started becoming a thing, and I remember not understanding it. I thought, 'Oh, this is just like Facebook statuses, but that's all it is?' I sort of ignored it for a while.

Then I got a job as a copy writer for a giant e-tailer job, which was pretty boring, so I started using Twitter when I'd get my work done. I followed people I thought were funny, and saw that it was an outlet you could actually make jokes. I started doing that more.

You started making a name for yourself when you worked at Craig Ferguson. How did that happen?

The people who did Letterman produced Craig Ferguson, so I was able to get a job in 2010 as a P.A. I moved to L.A. from Utah, where I grew up, and I honestly expected the job to last for two months, and I'd go back to applying at Yogurt Land or Old Navy. But it lasted for almost five years, and a week into the job, Craig put me on TV, and weirdly started putting me on a lot, so they hired me full-time.

Would they have you in sketches?

Usually they'd put me in a bad costume, and I'd stand there while Craig talked to me, off-the-cuff. But that parlayed into Twitter, with getting a little bit of a following.


Were you working on your own material or scripts at that point?

Working for that show, I'd met a lot of people in comedy, and made a lot of friends through it, too. But by the end of working there, after five years, I kind of figured that would be it for me, in terms of getting anywhere in comedy or TV. At a very dark point, I remember looking at the job listings for a TV station in Salt Lake City for a social media manager. One of my comedy friends said, "Bridger, just hang on and don't do anything drastic."

A month later, Jimmy Kimmel reached out to me directly through Twitter, and after emailing back and forth, we met in person. We got to know each other for a little while, and at the end of the meeting, he told me they wanted to give me a chance as a staff writer. I didn't expect them to hire me on the spot like that. Afterward, I went out to my car and listened to ELO and cried.

How long were you at Kimmel?

Almost two years. It had always been my dream to write on a late night show. Jimmy was the best boss in the world.


Were you writing your own stuff on the side?

After a year and a half, I tried writing a pilot on my own. I'd written one a few years before that was really bad.

And this was when the Kimmy Schmidt opportunity happened?

They asked for a sample, and my agents sent over half of this new pilot. I ended up interviewing with Robert Carlock and David Miner (the show's producers) back in January.

How did that go?

I'm truly bad at gauging interviews, so after we met, I remember thinking, "Wow, what an opportunity," and assumed that would be the last time we chatted. My boyfriend kept saying, "I feel like you're going to get it," and I would say, "There is truly a two-percent chance that this is happening."

But after we sent over my full pilot, they wanted to talk again, this time over Skype. Skyping with my own mom, I'm uncomfortable, so you can imagine how nervous I was Skyping with potential employers. But they were so great, and a week later they offered me the job. I love the show so much, and I knew I needed to take this opportunity and move to New York.

How was it telling everyone at Jimmy Kimmel?

I was pretty nervous to tell Jimmy (Kimmel) about it, just because he'd given me such an incredible chance, and had been such an amazing boss. He was really great about it, though, and so encouraging, and so was the writing staff. They let me stay on till I made the move. I've made some really great friends out of it, so the whole thing was really bittersweet.

What was it like moving to such a big city like L.A. from Utah. Especially growing up Mormon and slowly coming out as gay?

I knew L.A. was a little closer in lifestyle than what I was used to in Salt Lake City, so making that transition wasn't so rough. When I first moved to L.A., though, I lived with a couple and their baby.

They were totally insane. I mean, any couple with a small child who lets a stranger live in their home, that's a red flag. But on top of this, I was this closeted gay man living in LA with essentially no friends, no romantic relationships, and no plans to come out.

Was the choice to not come out influenced by your religious background?

100%. I think a huge part of why moving to L.A. was so important for me—not just because I wanted to work in entertainment—but because I figured it would be a gateway for me to live a life where I was an actual person. But that beginning period was so up in the air—my job, everything—and the prospect of coming out, then having to move back to Utah and not knowing if my family would be accepting of it, just gave me more excuses to stay in the closet, and to not date anyone.

How was it starting to date guys for the first time?

I was terrified. I was in San Diego one time, and I remember downloading Tinder and feeling better because it was location-based, and I didn't have to worry about coming across anyone I knew. When I would use it in LA, and happened to see a friend or acquaintance, my heart would race, even though no one would actually care.

Coming from a Mormon background, though, I was taught that everyone does care, and that this was going to ruin your life. But eventually, I started going on dates with guys, and everything was fine—aside for the fact that most dates are terrible.

When did you tell your friends and family?

About seven months into dating guys, I started dating my current boyfriend. It turned into a real thing and I thought, "OK, he's fantastic and just makes my life better, and he makes me feel like a human being for the first time," so it made it easier telling people. The first person I told was my coworker, Bess, at Kimmel. I said, "Bess, I'm gay," and she said, "Bridger, I know," and was terrific about it.

The whole staff at Jimmy Kimmel was so supportive. Jimmy and his wife Molly (McNearney)—one of the co-head writers—were so nice about it. Jimmy even offered to fly out to Utah with me if need be, so I could tell my parents.

Eventually, I told my sister and brother, and my parents, and it went better than I had ever hoped. I'm bringing my boyfriend home for Christmas this year, so it's all worked out great. All of my fears growing up have just disappeared.