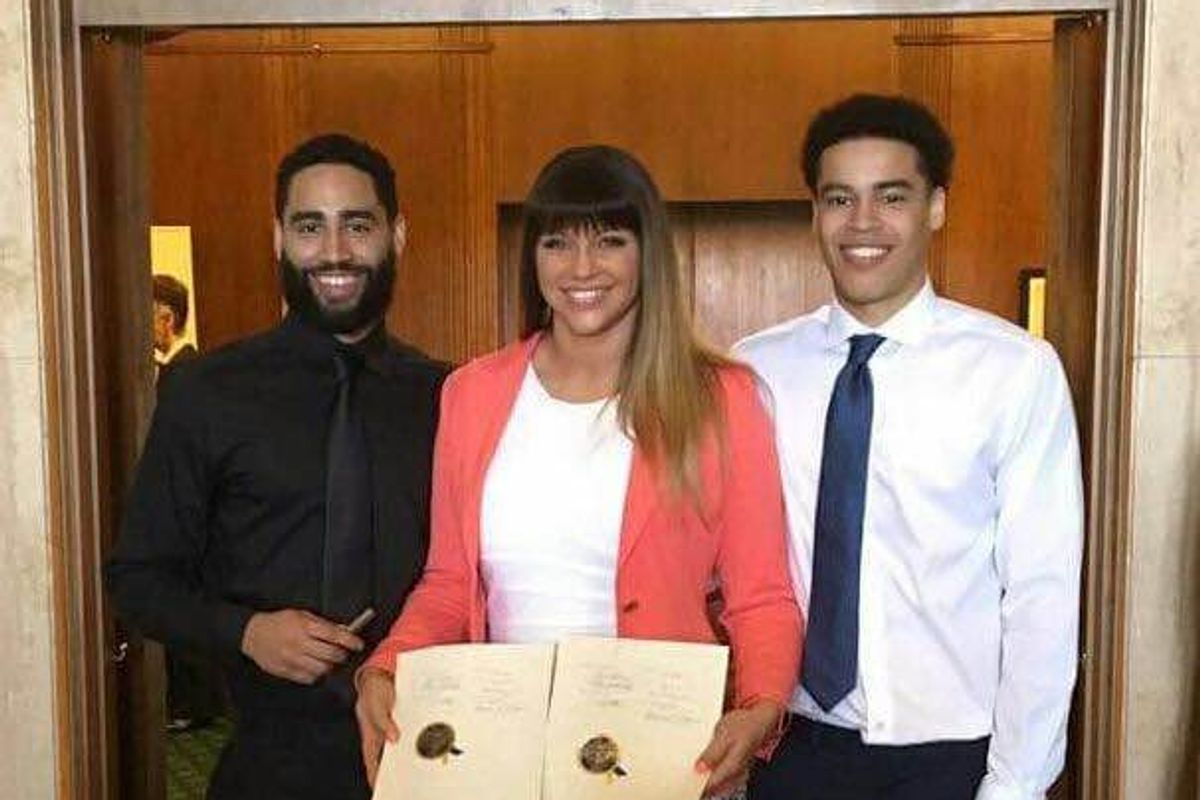 In 1998, 24-year-old Brenda Tracy was a single mother of two working as a waitress in Salem, Oregon, when a night hanging out with friends went wrong. She was the victim of an alleged gang rape, which included two Oregon State football players. Though Tracy reported the assault to the police and an investigation ensued, she did not end up pressing charges, and the only consequences her attackers saw was a short suspension from playing for Oregon State. In a 2014 interview with the Oregonian, Tracy talked about her grappling with the case and the fallout from it, including her anger that the institutions her attackers attended did little to hold them accountable.

Her story went viral this June after her son Darius Adams launched a petition (that has received over 150k signatures so far) that calls for the NCAA to institute a policy for disciplining players accused of sexual assault instead of allowing individual schools to decide punishment. Adams writes heartbreakingly in his impassioned plea, "I know that the police threw away her rape kit and the DA lied to her about her case. I know that Oregon State cared more about football and money than my mom. I know that my mom wanted to kill herself, and I know that she almost did."


Tracy's story, sadly, is not unique--in fact, it's a fairly frequent refrain, echoed over and over by victims who criticize the way institutions of higher learning fail to effectively handle sexual assault. Adams' petition was spurred in part by the horrifying details emerging about how Baylor University officials, including President Ken Starr, ignored, diminished, and retaliated against women who made sexual assault claims against the school's football players. In 2014, federal campus safety data showed that about 100 colleges and universities had at least 10 reports of on-campus rape. Stanford, the school Brock Turner attended, reported 26. Presently, on-campus rape and rape attempts are estimated at 20% and 25%, and 9 out of 10 victims know their offender personally. High profile cases about on-campus rape have appeared regularly in headlines in the past few years, whether it's the recently revived discussion about filmmaker Nate Parker's involvement in an assault in the '90s, or Columbia student Emma Sulkowicz hauling around her mattress as protest against an administration that failed her.

This all fits into a larger, longer story about rape culture, one aided and abetted by a system that fails to protect victims, and continues to sympathize with perpetrators by sentencing them lightly--and in some cases not sentencing them at all. Rape culture—commonly held sexist beliefs that privilege men over women, so that when women are raped, they are told they provoked it—impacts us all. This summer, Tracy has been traveling around the country speaking, particularly to athletic organizations, about on-campus rape and the culture that perpetuates it. PAPER caught up with her to talk about the petition, the NCAA's response thus far, and what she hopes will come of her and her son's efforts.

What compelled Darius to create the petition?

When the Baylor scandal broke I was really upset. It was very triggering for me. He saw that I was in turmoil and he wanted to help. That's when he decided to email NCAA President Mark Emmert. People don't get that this affects entire families, not just the victims.

What happened when he emailed Emmert? Did he receive a response?

It's been good. President Emmert called me in July, and I met with two executives from the NCAA later that month. I told them my ideas and they were receptive. And now, we're in Indy at the headquarters.

How big of a problem is rape on college campuses?

Rape is a serious issue on our college campuses and we see a reckless disregard for victims when it comes to cases where athletes are involved. It's almost as if it's okay to commit criminal activity if you are an athlete. Somehow athletic ability trumps the safety of students. When I speak to athletes I tell them every detail of my rape, so that they can put a face to the issue. The other thing I do is ask them to get involved. Most rapes are carried out by men against other men and women, but it is only a small fraction of the male population committing these crimes. That means the vast majority of men are good and won't commit acts of sexual violence. Those are the men I want to reach. I try to empower and inspire those men to align themselves with women to raise awareness and also intervene when they see something. Good men have to stop being bystanders. They have to take a stand and hold the rest accountable. Truth is, if women could end sexual assault and domestic violence, we would have already done it. We need men to get involved.

What outcome would you like to see come from this?

At the very least, I would like them to vote to convene a task force that would be responsible for creating policies to deal with violent athletes. My hope is that we can move to a system where the NCAA takes some, most, or all the decision-making away from individual universities [in cases of assault]. The universities have proven time and time again that they are not going to make the right decisions regarding this issue. Enough is enough.

Were there any surprising sources of support?

Nikki Glaser from Comedy Central, DL Hughley and Rickey Smiley all put it on their sites. All of the major networks have run stories. ESPN's Outside the Lines and CBS sports show We Need to Talk both did segments. Politicians have been quiet. A lot of people have been trying to get the NCAA to address this issue for awhile.

What do you think has stopped the NCAA from taking action? Have there been other movements like yours?

The response from the NCAA has always been that they prefer to defer to the individual universities on these matters. They've given recommendations, but that's it. I'm not aware of anything like ours. I'm pretty sure that my son and I are the first "mother-son" team to engage in this type of activism. I believe one person can change the world -- why not me? And I've always told that to my sons: The first step in accomplishing anything is believing that you can.

Do you think the NCAA will actually take action and create their own policies to handle sexual assaults committed by their athletes?

I really don't know what they will do, but I hope so! There's no better time than now to do this. I know that my son and I are committed to this cause. I like to think that the NCAA would be appreciative of some change. I have high hopes and a lot of faith that they will step up and do the right thing. And if not then we will keep pushing for change.