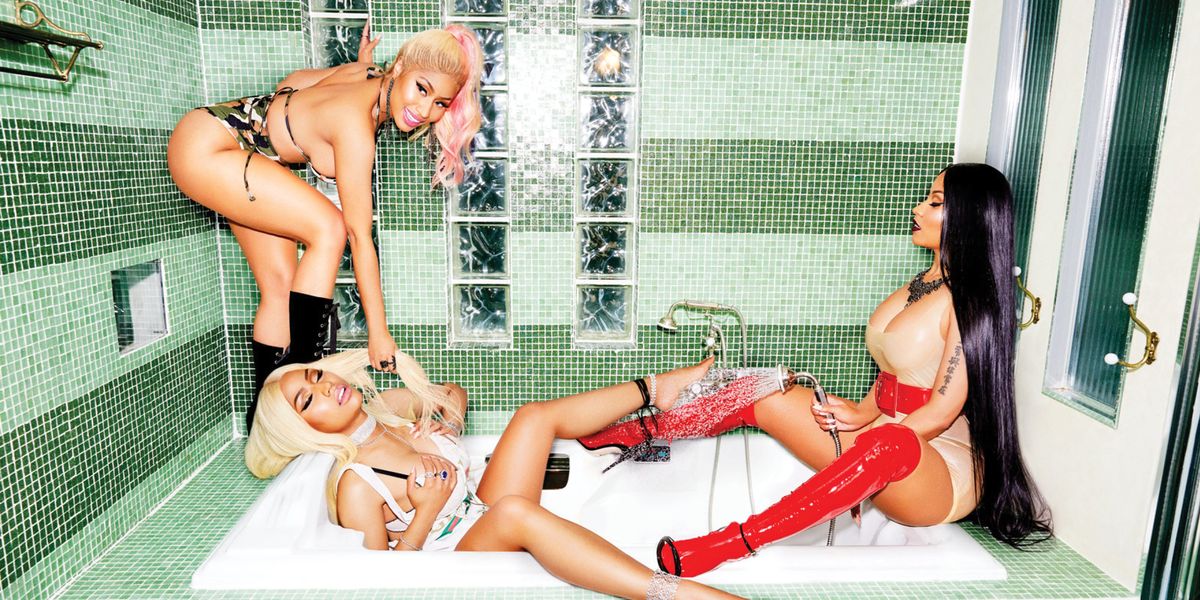 It's been a decade since Nicki Minaj released her very first mixtape, 2007's Playtime Is Over, which established her lyrical talent and knack for creating a colorful world filled with witty rap references, vocal impressions and memorable characters. Now, ten years, three studio albums, two acting roles in major motion pictures (Barbershop, The Other Woman), several endorsements and business endeavors (including MYX, her own brand of Moscato wine) and an unmentionable amount of awards later, we have watched Nicki peel back the layers from her Barbie Girl public persona and expose a more personal side. Her last record, 2014's The Pinkprint, showed a more vulnerable approach to her music with songs about relationships and love. We even saw her style go through a similar evolution, trading the flamboyant, day-glo wigs and bright outfits that had become her trademark for a polished, natural look that favored more muted palettes and sleek, long hair.

But what hasn't changed from day one is Nicki's connection to her immensely loyal fan base, #TheKingdom (FKA The Barbz), a connection that grows and thrives on the Internet and social media. It's a bond that has even seen Nicki changing fans' lives IRL, like when she offered to pay some of their college tuitions and student loans back in May. And now, while fans await her fourth studio album, which she's understandably being very tight-lipped about, Nicki's making sure not to leave us completely empty-handed — she currently has two major features climbing the charts, a remix of Lil Uzi Vert's "The Way Life Goes" and "MotorSport" with Migos and Cardi B. We recently talked with Nicki about this passionate and intimate relationship with #TheKingdom, as well as her new music, future acting opportunities and how her spirituality helps her stay cool and calm amidst the entertainment industry's chaos.

You're one of the most active artists on social media— you have over 80 million Instagram followers, 21 million followers on Twitter, 42 million on Facebook — and your posts, likes and re-tweets seem to all come from you. How in the world do you have time to do all that?

I've always been very active with my fans, and so they expect me to speak to them when I put out something new. They expect me to ask their opinions, and they're usually really excited when something comes out so they wanna have the chance to express themselves, and I like to give them that opportunity. But there are times where I take social media completely off my phone. I think that it's important to deactivate sometimes and unplug yourself from the matrix, because as great as it's been for my career, it can be unhealthy to certain people as well. If you don't know how to control your emotions, if you don't know how to think before you speak, it can also get you in a lot of trouble.

[But] it remains something positive in my life, because even before my first album — with my three mixtapes — I was on Twitter all the time, talking to my fans about every song on every mixtape. So nothing has changed. I guess when artists become bigger they tend to shift their social media presence, but I'm just one of those artists that hasn't done that.

Tell us about deciding to pay for your fans' college tuition, which you announced on Twitter back in May.

I didn't expect that to make the news. It was so impromptu and spontaneous, but that is very indicative of the relationship that I have with my fans. Like anything can happen, anything can be said. My fans have no filter and I have no filter. So at any time, you could be witnessing something historic happening with us. I was able to help some of my die-hard fans and that made me feel really, really good. That was one of the best feelings in a long time.

I appreciate that you've been very tight-lipped about your new album since the Internet can get so crazy with leaks and rumors — it's just like one big spoiler alert. You're remaining in control with all of this.

I think the real music lovers just want to be surprised, and all they care about is if I've grown as an artist and if they're gonna be able to truly relate... I really don't have much to say about the album other than it's great and I'm excited about it.

Among artists of your generation, you're pretty peerless. But would you ever be into doing a female equivalent to Watch the Throne?

I would be open to doing [that] if the time was right. I haven't thought too much about that, though. The only person that I've seen a lot of people speak on, when talking about an album of that caliber, is Beyoncé 'cause we did "***Flawless" [remix] and "Feeling Myself" and we've actually performed together. I always see a lot of people saying, "Oh my gosh, a joint album with you guys would be really dope," but, you know, those are the kinds of things that are just wishful thinking from fans... They're far-fetched because usually artists are in such different places in their personal lives and career lives that it's hard to make that work. I mean, I even at one point was about to do a mixtape with Future recently, [but] with me working on my album and with him doing other projects — and he thought we should be in the same place at one point to really vibe — it was hard, 'cause he was on tour and I was in the studio [and the timing didn't work]. So even when you like an artist and you respect their work, it's very hard to make those types of ideas come to fruition, but when they do come together like the Jay and Kanye [project], then it's magic for sure.

Let's talk about your movies and acting for a second — do you have any plans to do any more acting work in the near future?

I would love to do more acting. Acting is my first love. Of course, right now is the music portion of my life, but, you know, I can multitask. I don't see myself doing something now that's going to require too much time in terms of being on a set for six months, but I'm always open to at least discuss something in acting. I'll always have the acting bug — I've had it since I was in elementary school. I was always doing plays and then went to a performing arts high school here in Manhattan. So I can't see my life without it, but it definitely takes second position to my music.

Did you ever put acting on the front burner?

Right out of high school I went on auditions 'cause that's what we did. When you are a drama major, you do a showcase and then agents come to the school. I remember I had so many agents interested at the end of my senior year. It was an abnormal amount of interest. But then when it came time to go on those auditions, you realize that there are millions of [girls like you] auditioning for the same role. You're not so special. So I just remember realizing, "Oh okay, this is not for the faint of heart... you know, this is gonna be a lot of closed doors, a lot of being told 'no' and you're really gonna see if this is what you really, really wanna do." I remember having that talk with myself... So I didn't really pursue it. I was doing it right out of high school, and then I think that last year out of high school, I stopped going on auditions and I started working and writing raps.

Do you have a self-care routine? You've always been able to stay really calm and collected in the public eye — how do you keep your cool when things get out of control?

Oh, I keep my cool because I'm a rm believer and I always get the last laugh. That's been the theme of my life. You can usually bet your bottom dollar that anytime you see something on the Internet going on with me, no matter how it looks, I'm usually behind the scenes laughing. Because I have a strong relationship with God. I've watched Him work miracle after miracle in my life. I've watched Him shut down every person who's ever come up against me, and so it's comical at this point 'cause I sometimes feel like, "Wow. Don't they know how this movie's gonna play out? Cause I definitely know how this movie's gonna play out." My closest friends and team members and family — we put it in God's hands and leave it there. And we know that Nicki is always gonna have the last laugh. And Nicki is always gonna continue to be successful because I give so much to people who don't deserve. And when you are consistently doing good for people who do not deserve your goodness, the universe has no choice but to give that back to you, tenfold.

I have a loyal fan base who never leaves. And all they do is motivate me and believe in me and fight for me. So anything that even seems negative has only made me even more of a magical unicorn. I feel this year I have never been stronger, I have all my super powers back. I've never felt this powerful, as a woman, as an emcee — I've never felt this invincible.

And I think people have thought that they were gonna witness the Nicki Minaj nervous breakdown, but you've never seen it and you never will. You're gonna continue to see me queening at Paris Fashion Week and having fun with my best friends. All my girlfriends have been in my life for over twenty years. I don't have a circle of people around me of 'yes-men' or fakeness — I have my real friends that have been in my life since elementary school, junior high school, high school. It keeps me grounded and it keeps me genuinely happy, and when you really truly feel grateful every day, then you become really invincible. I live my life knowing that I deserve these blessings because I've been good to people who didn't deserve it, didn't appreciate it, took advantage of me, stole from me, lied on me, all these things and I still never came out and spoke against people. I could say things that would be really detrimental, but I love my life. I feel like when you love your life, you don't have to hit below the belt. Just keep it moving. I believe in my talent, I know who I am... And when you have that knowledge, you just have to kind of sit back and wait for the rest of the world to catch up. And I feel like this new album is gonna do that. It'll make people realize, "Yeah, okay, Nicki's not going anywhere. Nicki is really who she says she is."