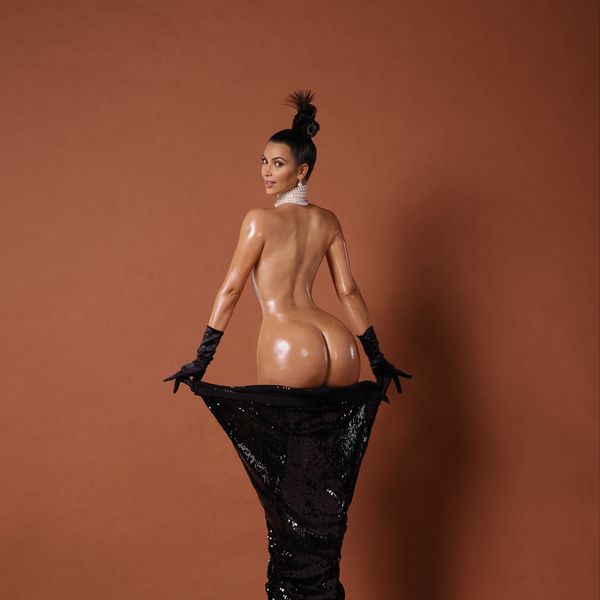 Elizabeth Thompson
12 November 2014
If you know nothing else about Kim Kardashian, you know that she is very, very famous. Some would say that's all you need to know. At press time, she has 25 million Twitter followers, about a million less than Oprah Winfrey and nearly 5 million more than CNN Breaking News. Her Instagram account, where she is a prolific purveyor of selfies, is the site's third most popular. You can't walk through a supermarket without glimpsing her on a multitude of tabloids whose headlines holler about her relationships, her parenting style and the vicissitudes of her ample curves. But she has also graced the covers of highbrow fashion bibles like W and Vogue; with her now-husband, Kanye West, she appeared on the latter above the hashtag #worldsmosttalkedaboutcouple, creating a furor that made it perhaps the #worldsmostcontroversialcover.

Her millions-strong popularity and inescapable media presence have made her grist for think pieces galore. She is variously seen as a feminist-entrepreneur-pop-culture-icon or a late-stage symptom of our society's myriad ills: narcissism, opportunism, unbridled ambition, unchecked capitalism. But behind all the hoopla, there is an actual woman — a physical body where the forces of fame and wealth converge. Who isn't at least a tad curious about the flesh that carries the myth?

Unlike most people, she looks exactly the same in person as she does in photographs or on television, with one exception: she is smaller than she appears in images, with tiny, almost doll-like ears and feet and hands. Everything else about her seems amplified, tumescent. Her black hair is thicker than any you have ever seen, her lips fuller, her giant Bambi-eyes larger, their whites whiter, and the lashes that frame them longer. If some of this is the result of artificial enhancement — does anyone else have eyelashes that resemble miniature feather dusters? — none of it seems obviously ersatz. But that's not to say it looks real, either. She is like a beautiful anime character come to life.

As soon as she arrives at the hostess podium of the Polo Lounge in Beverly Hills, where we meet for our interview, a young fan who appears to be in her late teens or early twenties accosts her. The fan has been running to catch (keep up with?) Kardashian; she brings with her a breeze. "Will you take a selfie with me, Kim?" she pants. (This is what fans asks the High Priestess of Instagram -— autographs are so last century). She obliges, leaning in for the picture and striding away almost before I can blink. "She's gonna post it," Kardashian says wryly. "I bet it's posted right now." Later, she will tell me that she's "not really a filter person," and that she doesn't generally use them when she publishes her many selfies. As she talks, I notice that her skin, which is the golden color of whiskey, is free of wrinkles, crow's feet, laugh lines, blemishes, freckles, moles, under-eye circles, scars, errant eyebrow hairs or human flaws of any kind. It's like she comes with a built-in filter of her own.

With its enveloping green leather booths and twinkling white garden lights, the Polo Lounge is a setting that lends itself to intimacy. Kardashian, who is wearing a monochromatic champagne-colored ensemble (Margiela bodysuit, Chloë silk pants, Lanvin silk coat), gives off a cozy vibe herself. She leans forward while she talks, resting her cheek in the palm of her hand as though she's chatting with her closest girlfriend. She tells me that the Kardashian clan is currently a week into filming season 10 of Keeping Up With the Kardashians, which she has called "the best family movie ever," never mind the rampant speculation, in early 2013, that season 9 would be her last. I'm surprised to hear that they still enjoy the process, since your typical American family would no longer be on speaking terms. "We're kind of obsessed with each other," she explains.

"I love sharing my world with people. That's just who I am."

Today, a day off, she spent at a pumpkin patch with West, whom she repeatedly calls Kanye — she clearly enjoys saying his name — and their 16-month old daughter, North. They arrived at the farm unbothered by photographers, a rarity in the circus that is her life ("literally every single day there's about ten cars of paparazzi literally waiting outside our homes"). It wasn't long, however, before the paparazzi had surrounded them. "I couldn't really pick out our pumpkins, and [North] couldn't really enjoy it," she says. After a moment, perhaps concerned that she has come perilously close to complaining about her fame, she adds matter-of-factly: "You just have to not care. You just have to say, 'This is our life, and it is what it is.'" Her delivery is Zen-like, almost affectless, as it is on the show. "All my friends tell me the world could be coming to an end, and I'm always so calm," she says, opening a packet of Equal. She empties its contents into a glass of passion fruit iced tea, then fastidiously bites granules of sweetener off her manicured nails.

The rap on Kim Kardashian is that she has done nothing to merit her fame. But the longer I steep myself in the ambience of her pleasantly languid manner and hologram-perfect looks, the more facile this charge begins to seem. Of course, she has cannily leveraged that fame to build, with her sisters, a beauty-industrial complex, which includes a clothing line, a makeup line, a line of tanning products and seven perfumes. (A collection of hair care implements and styling products will debut in the spring). Her mobile app, Kim Kardashian: Hollywood, in which players climb their way to A-List status under Kardashian's tutelage, has earned over $43 million since its debut in June.

Yet her perceived lack of accomplishment is also, perhaps, an accomplishment in itself. Kardashian seems to know instinctively that, as Andy Warhol once observed, "When you just see somebody on the street, they can really have an aura. But then when they open their mouth, there goes the aura." Take the stream of small faux-confidences that she offers during the interview. They reveal very little yet foster a sense of closeness. She tells me that she is "obsessed with apps" but, when I ask her to name one, she replies, "I like all different apps." Of her 72-day marriage to Kris Humphries, one of her rare missteps that actually left a footprint, she says: "It's just one of those life lessons that you have to learn, and it's OK." Her behavior suggests that the key to total ubiquity is giving up all of one's verbal edges and sharp angles (while occasionally tossing out a memorable visual flare: a sex tape, say, or a nude photo shoot).

Social media has created a new kind of fame, and Kardashian is its paragon. It is a fame whose hallmark is agreeable omnipresence, which resembles a kind of evenly spread absence, soothing, tranquil and unobjectionable. There's an argument to be made that Kardashian has been recorded and viewed more often than any other personage in history, and while she has certainly had her awkward moments (posting a vampire facial on Instagram, announcing that she wanted to buy a stroller that complemented her unborn baby's skin color), she has also never made a truly ruinous gaffe, been caught in a Britney Spears-style public meltdown or sallied forth looking less than photogenic. As she puts it, "There's nothing we can do that's not documented, so why not look your best, and amazing?"

To mere mortals who occasionally visit the grocery store in yoga pants, her willpower and self-discipline are a marvel. Imagine being filmed and photographed constantly, yet never saying anything seriously controversial or appearing unkempt. The effort involved seems torturous, impossible. And yet, though her life requires work of a sort — roughly two hours of hair and makeup each day, regular meetings for her assorted businesses, wardrobe fittings, photo shoots, 5:00 a.m. workouts — you don't get the sense that she is hiding or suppressing her true, private self. "I think you've seen every side of me on my show," she says, popping a piece of pound cake into her mouth.

We're accustomed to our performers having onstage and backstage registers, but for her there is no division between the two. This is, indeed, the definition of a reality star. She's not performing, that is — at least not visibly. She is being, and being is her act. Her appeal derives from her uncanny consistency, as does that of her show. It's relaxing to watch the sisters sprawl on each other's beds and talk about nothing, to see them discuss constipation cures or their preferred way to eat Nilla Wafers. Like Warhol's screen tests, Keeping Up With the Kardashians has a disarming purity. It invites us to glory in its stars' mundanity, which permits us to enjoy our own.

"My makeup artist said to me the other day, 'You haven't taken a selfie in a while,'" Kardashian says, as the afternoon slides into evening and the light turns magic-hour blue. To remedy this, she posted one of herself in full makeup and a white terrycloth robe, with the literal caption, "It's been a while since I've taken a selfie." It garnered more than a half-a-million likes. Selfies have been on her mind lately. She is putting together a collection of her oeuvre, called Selfish, to be published by Rizzoli in the spring. She has spent hours sifting through her vast, meticulously organized digital archive. "The book company edited them, and I was like, 'Wait a minute! There are like 300 here that you're not adding!'" she says. I remark that I am surprised she can remember and differentiate among a bunch of near-identical photos of her face. She can, she says; she is sorting them chronologically, dating them by what she wore to specific events. "I know what I wore, what accessories I wore, where I was, who I was with," she tells me. "I remember everything." Her mind, it seems, traps the minutiae most of us forget. For her, though, it's not minutiae; it's her life, and her life is her career.

I ask her whether Kim Kardashian would exist without social media. " I don't think so..." she says, slowly, then reconsiders. "I don't think social media was that heavy when we started our show, but I think we really evolved with social media." The next day, as I scroll through Instagram, I come across a photograph of her, taken the night of our interview, wearing the champagne getup at a restaurant in Venice. I also find two photos of North toddling around the pumpkin patch in a tiny fringed cape and Baby Vans. One of these pictures has more than a million likes. "I love sharing my world with people," Kardashian tells me, and I detect no hint of falseness. "That's just who I am." No more, no less.