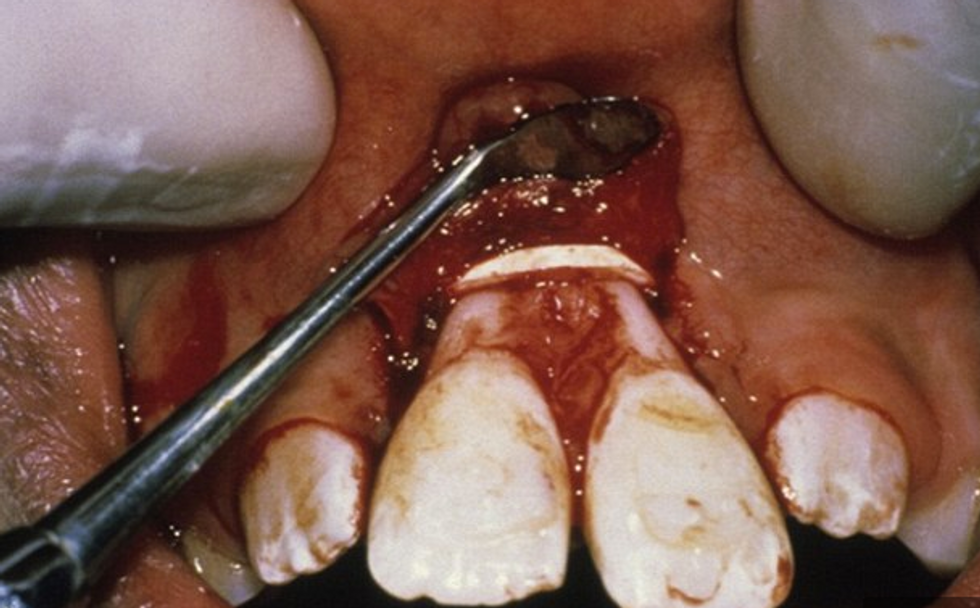 Brace Yourself: This New DIY Orthodontia Trend Monetizing On Teens Is Horrifying

"Gap band" braces are the horrifying new beauty trend that purports an at-home approach to orthodontics. Primarily aimed at image-conscious teens who cannot afford braces, it entails the daily wearing of small rubber bands around your teeth to eliminate gaps -- though the actual "After" photo should compel you to never try DIY dentistry at home.
photo via American Journal of Orthodontics & Dentofacial Orthopedics
What's even worse than that terrifying snap though is the new influx of companies like Gapfix, TeethGap.com and Orthofill, who are trying to monetize on this dangerous trend -- despite the fact that the American Journal of Orthodontics & Dentofacial Orthopedics issued a consumer alert last year on the misuse of these bands, as they can lead to intense root, bone and gum damage, as well as tooth loss.
Incredibly painful (duh), they're advertised as "cheap, quick fixes" that are "non-intrusive," "safe," and, uh, "orthodonist-developed" (sure), they retail for anywhere between $5-$57, depending on which "service" you decide to use.
And while they probably don't include the actual results in their Microsoft Paint-made pamphlet, the fact that this shit hasn't been reported the Better Business Bureau is a little mind-boggling, especially since it's a pretty dangerous con. Because while these sorts of "tutorials," utilizing objects like Goody hair bands, have been floating around YouTube for the past few years, these new companies looking to make a profit off of teen insecurity are a more recent development and suggest an even more disturbing surge in this trend.
After all, never underestimate a youngin's desire to address their physical insecurities in the fastest way possible, especially if the "solution" seems cheap and easy. Look no further than FantabulousFrootloop's chilling video to see a girl no older than 12 showing other gap-toothed kids this "really good idea."
[h/t Refinery29]
You May Also Like
Famous People