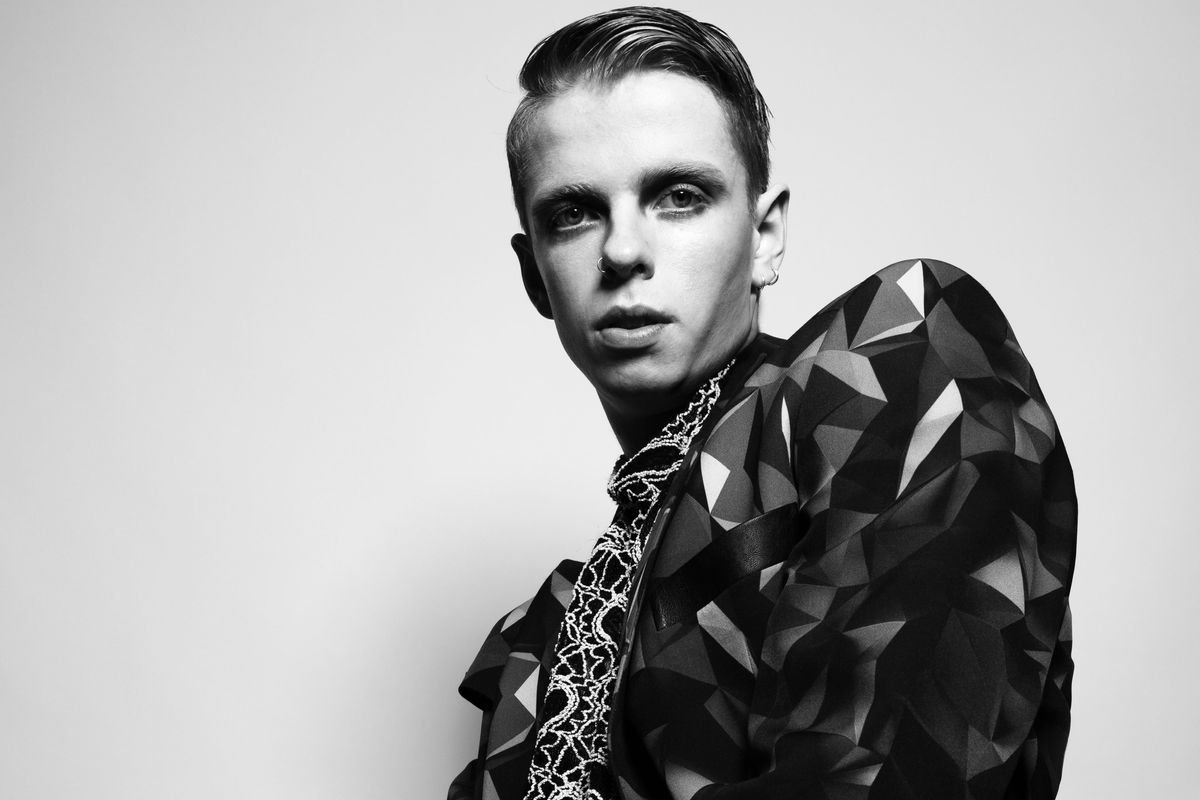 As the brain behind some of music's biggest hits, it's fitting for Boy George to help groom the next generation of pop vocalists. Jamie Hannah, a 22-year-old UK singer-songwriter, is the newest signee to George's namesake label, and debuted this February with his opera-infused single "Sound of My Youth."

Laced with homages to classical music, Hannah's breakout track is still radio-ready, with fresh, electronic beats and impeccable vocals. "This is the sound of my youth," his voice flutters above production by Benny D, who's worked with everyone from Kylie Minogue to Stormzy.

Today, PAPER premieres Hannah's official "Sound of My Youth" music video, alongside a conversation between him and his iconic mentor. Check it out, below.

Boy George: As a young British singer-songwriter, you are a unique blend of pop and classical music. How do you fuse the two genres together?

Jamie Hannah: You know, it's not so strange. Classical music was the popular music of its time. Classical music forms my roots — that's how I was trained, but pop is my love. Instrumentally, I am drawn to the beauty of orchestral instruments, but then I pair it with a distinct electro-synth pop sound. For example, having suspensions creates dissonance in the strings to portray pain. I also try and incorporate intricate vocal trills and ornamentation — associated with one of my favorite composers, G.F. Handel, in some of the arias in his operas.

My most-liked time in the studio is when I can play around with harmonies; having studied traditional Bach's Chorales, this comes naturally. Frequently I have to tell myself that "less is sometimes more."

Both genres have been integral in my musical studies and having the foundation of a classical background has given me the knowledge to delve into new ways of finding a unique pop sound, merging what I think are the best bits from both genres.

Boy George: Benny (your producer) and I are old friends. We had been working together and he suggested you would work well on some of the tracks we wrote. What did you think about that?

Jamie Hannah: Thank you. Working on music that you and Benny had put together was such an honor. I was so excited, but also apprehensive that I could do your compositions justice. I immediately connected with your work and would like to think I'd put my own touches to it.

Boy George: How do you feel your music is connecting with your age group?

Jamie Hannah: I've only just released one of my songs so far. However, already I am overwhelmed with the positive response it has received across all age groups. I did not initially target a specific demographic and I certainly don't want to pigeonhole myself. My music is where I am at the moment — it is the real me. I'm excited to get my next single out and continue to connect some more with my fans. I am on tour at the moment and it is great to meet people and hear firsthand what they think of my music.

Boy George: Tell us about your experience of the "Sound of My Youth" video. What was the process of filming?

Jamie Hannah: The process of planning, filming, and editing was all very surreal, as it was the first time for me. I did two videos for "Sound of My Youth," both completely different with juxtaposing colors, as they had different intentions. For the acoustic video I wanted to keep it very organic and naked, keeping the visual spacious and ethereal to match the vocals. It was filmed with one camera, with my classically trained friends accompanying. It was kind of you to post it on your socials.

The official music, however, was a significantly bigger project. I collaborated with a whole bunch of creatives — friends, colleagues, dancers, stylists — throwing myself in the deep end alongside great people at the top of their game, which in turn led to a warm and friendly energy on set. It's a video produced by millennials, for millennials. A special thank you to the director Modu Sesay who, despite my 393 edits allowed me to create a visual, my perfectionist self is so proud of. Also Jade Adeyemi, the artistic director and Lizzie and Richard of Hause of Hip Hop choreography team. It was my first time doing choreography, so I was a bit dubious but hey I got there in the end.

"Instrumentally, I am drawn to the beauty of orchestral instruments, but then I pair it with a distinct electro-synth pop sound."

Boy George: What do you think about releasing "House of Truth" as the next single?

Jamie Hannah: It's great, I think we both feel it is a hit song and I am so thrilled that it is coming out on your label. I loved the message in your song: truth. It is ambiguous — about being honest with yourself, coming out — with no elephant in the room, however it is also about the truth within yourself and truth within a relationship. It also has the most phenomenal gospel singers doing backing vocals.

Jamie Hannah: So busy at the moment, I barely have time to sleep! We've been in the studio putting finishing touches to a few tracks for an EP. I'm currently on tour with Heather Small of M People around the UK. I have a few other tours in the pipeline to hit the US and UK later in the year. Maybe a few other secrets too...