Bow Tie Me Up

As the daughter of a bow-tie wearer, I was interested to hear what The Sydney Morning Herald's Elizabeth Farrelly had to say in her opinion piece "How the chill wind of commerce killed off the bow tie." Farrelly is concerned  primarily with the decline of bow tie 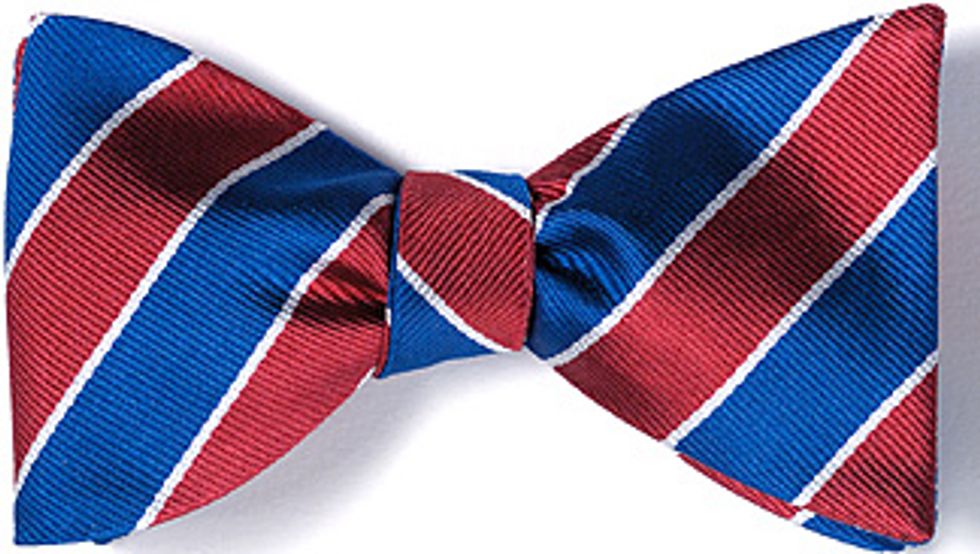 wearing among architects. Said decline leads her to ask, "When did architecture depart the gentlemanly mindset to become that saddened and compromised shadow of itself we see today?" Her conclusion: "Architecture used to be about beauty. Now, it's just about money." That may be true, but bow tie wearing has gone the way of the wind in every field.  I decided to do a little reporting. So I emailed my father and asked him what he thought about all this. He wrote me back:

He then went on to list three reasons why he loves a bow tie:

1. Being tucked down, as they are, under your chin, it's really, really, hard to spill food on them. Bow ties are sanitary!

2. Most people don't realize that -- unlike regular full length ties -- bow ties are reversible!  If your favorite tie gets a bit dingy from over use -- or heaven forefend, you manage to get a stain on it -- you can flip it over and use the other side.  Not possible with any other kind of tie.

3. It's hard to learn how to tie one.  So in wearing a bow tie you're not only showing good taste, superior intelligence and the like -- you're demonstrating a highly refined skill.  (Clip on's are, of course, so far beyond the pale that it isn't even worth discussing them.)

By instant-messaging with a former and very fashionable intern of mine named Alex, I was heartened to learn that the bow tie may have a future!  Alex "LOVES" them for many reasons, one being that "they can reveal your tummy." He added, "If you treat your man right, you'll make his bowtie spin." Sounds good to me!!