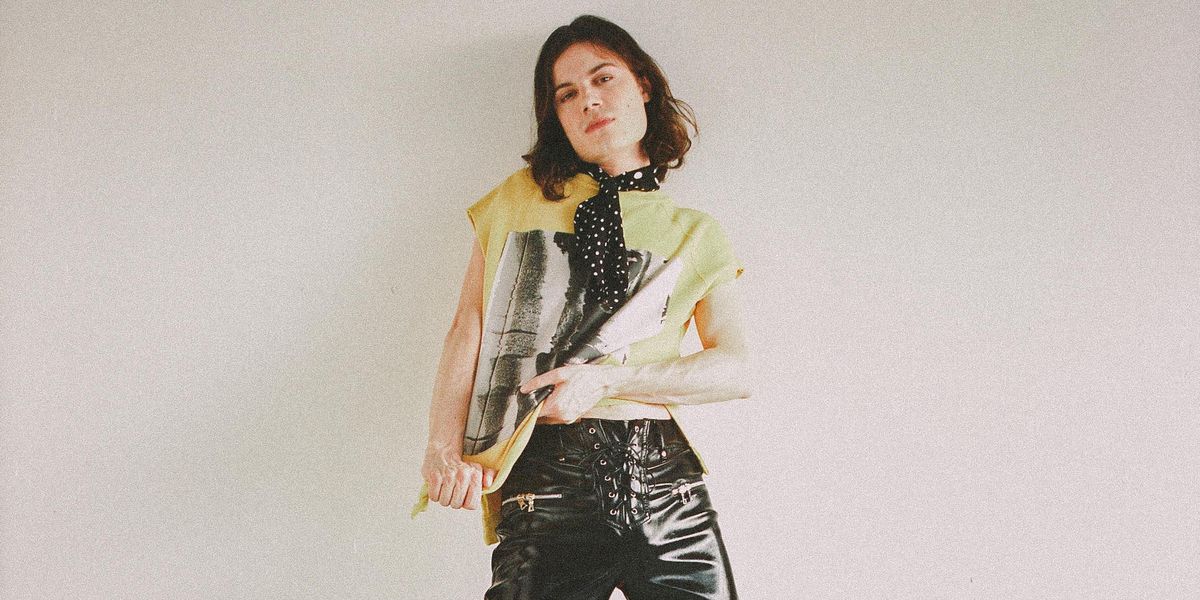 Spirituality is undeniably key in Blue Madonna, the much-anticipated sophomore album from BØRNS, out today. While absolutely saturated with references in support, even on name alone that fact is guessable, and singer-songwriter Garrett Borns confirms: "Making this album was like a religious experience."

The comedown after relentlessly touring his celebrated platinum-selling 2015 debut, Dopamine, left Borns with an "is this real life?" befuddlement. Returning to some kind of regularity — life on the road is oft like an alternate dimension — can be surreal, and difficult. (In light of Prince declaring BØRNS one of his favorite new artists, praising the blazing glam of the certified platinum single "Electric Love" specifically in one of his final interviews, is day-to-day normalcy even possible?)

Related | BØRNS Is the Rocker We Need Right Now

Borns questioned how he'd sustain energy on the road for the next go 'round, too. While home in Los Angeles, the singer says he became fascinated by Taoist literature and becoming immortal. "I was kind of figuring out who my immortal self was," Borns says with a breathy laugh.

Whether or not he found spiritual immortality isn't irrelevant, but focusing on that end result would obscure a most important journey; Blue Madonna is an opus of searching, rather than the culmination of that search. And in exploring possibilities, Borns grew his influences, and re-energized his songwriting; working with Tommy English again, he incorporated strings and theremin. "I was kind of trying to challenging myself to write in different structures," he says.


Ultimately, he stretched the breadth of his musical prowess; but Blue Madonna is about a personal process, not the answer.

This is Borns in restoration, from ground zero with a "Faded Heart," his "heart in the trenches, head in the heavens." Unveiled in August, the single was a telling teaser sonically too, with opulent instrumentation, richly layered and an exemplary showcase of Borns' sweeping vocal range. He's his own choir, literally and hypothetically. In the most recent drop, "God Save Our Young Blood" with Lana Del Rey intertwined, both of them enveloped in undulating blankets of ornate orchestration, Borns is "baptized in blue skies."

This quest isn't strictly celestial; it's earthly, too. Nature was a root inspiration for the latter track: "Being nature," he told Buzzbands LA, is "where everything makes sense, where everything is pure." Our clutching to vices and excess in whatever form, then, is often means of "trying to find some enlightenment."

Are those physical efforts misguided? On "Man," with percussion flickering beneath ripping, booming synth, Borns contemplates the world's end from the "god's-eye view" of a mountain. Taoists view the human body as a facsimile of the greater universe, a manifestation of the universe that contains all its aspects within — one's relationship to nature, akin to a partnership, is paramount.

In the album release notes, "Man" is presented as another key to the album themes; it's "about feeling almost immortal but also really vulnerable." For passing moments, Borns felt nearly "godlike" on the tour; he was also "completely worn out and beat down." In striving for enlightenment, is Borns better off descending from the mountaintop perch, grounded by earth?

In the album release notes, "Man" is presented as another key to the album themes; it's "about feeling almost immortal but also really vulnerable." For passing moments, Borns felt nearly "godlike" on the tour; he was also "completely worn out and beat down." In striving for enlightenment, is Borns better off descending from the mountaintop perch, grounded by earth?


With all its soul searching, Blue Madonna may seem mentally cumbersome, but it's actually freeing, like finally putting a dent in a spiritual to-do list that's been collecting the dust of regret since pre-puberty. Built on piano more heavily than guitars (Borns cites Elton John's early career Tumbleweed Connection as an influence), each song an epic of its own, a nod to Brian Wilson's use of key changes and modulating song structures, the outing is revelatory — bit by bit, and as a collective whole.

"I added a lot of things that are going to come out when you listen to the songs repeatedly," he says, adding that high-volume listening is vital.

Blue Madonna, Borns doesn't boil spirituality down to easy understandings, but he does make an ecstatic adventure of it all. In absorbing the album, we break ground in our own odyssey toward enlightenment; how deeply we dig from there is up to us.

BØRNS' Blue Madonna is out now.